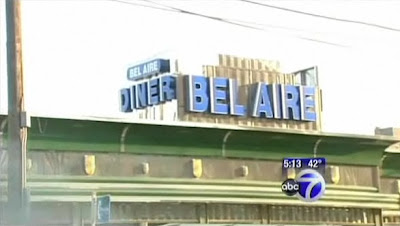 NEW YORK (WABC) -- Police have arrested four suspects in a string of violent robberies in Queens.

The most recent robbery happened on Wednesday at 7:00 p.m. at the corner of 37 Avenue and 23 Street.

Investigators said a Chinese food deliveryman had been robbed at 25-28 Broadway.

Officers were shown video of the suspects from one of the earlier robberies.

About a half-hour after the robbery, Officers Lisaura Mesa and Jose Velez, Jr. were canvassing the area when they observed two individuals fitting the description of the suspects.

Two other suspects were arrested on Friday.

The four are charged in a series of robberies dating back to January 12.

Video was captured of one robbery on January 16 in which a deliveryman was robbed and assaulted.

(The video is much more detailed than the story.)
Posted by Queens Crapper at 12:27 AM

We need to follow the traditional Astoria way of dealing with muggers--beat the Cr*p out of them and the entire neighborhood sees nothing.

Glad these young thugs were caught. Put them away for a long time. Rikers is very convienient to 23rd Street!

I couldn't find the video. How does the Belaire fit into this story?

Sorry, I think they took the report off their site. 1010WINS has a little more.

In other words, the usual suspects.

How "vibrant & colorful"
these "toughs" seem to be.

they will probably come out in 3 years tougher, crazier and dumber.

And they'll be blessed with "street cred."

When will we see the surveillance video that shows:

Obama said in his "race" speech early last year that sometimes his grandmother made racial comments that made him cringe. Obama. What exactly did Grandma Dunham say?

George, when I was broken-down on the Southern State, a black Pentacostle family on their way to services where the first to stop and render me assistance. You find the good and bad everywhere. By the way, I am the lady who says muggers need the "Cr*p" beaten out of them. White muggers do exist, an Irish boy nearly killed my mother in 1966.

Muggers do not belong only to one race. It a character issue. Muggers are bad and have it in them to hurt someone for their stuff. Sad thing it's usually about something so little.

Muggers do come in all races, there is good and bad all over and when the economy is doing poorly crime goes up. I drive and have gotten lost in various areas including the South Bronx and I have been helped by people of all difference races. I’ve lived in Astoria for many years and have never had any serious problems. I have never head of so many incidences happening in this area as we have been hearing the past couple of years. With all that is going on I have learned that you just need to be more alert and aware of the people around you, when you live some place for so long and feel safe your defenses go down...it should be a good thing but I am seeing that it can become a problem. I’m happy they caught these guys now I hope they catch the rapist we keep hearing about.