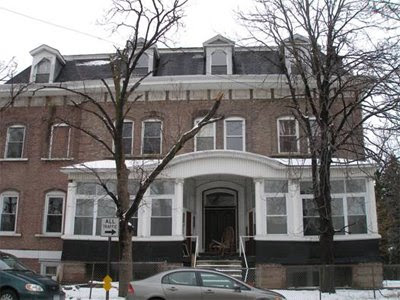 On Tuesday, February 10, 2009, the Landmarks Preservation Commission is holding a public hearing on the proposed designation of the following item:

The hearings will take place at the Commission's offices at 1 Centre St., 9th Floor North (time tbd). Any information you can provide about the building's significance and condition is relevant to our consideration. Attached please find a statement of significance for this building.

The mansion at 11-41 123rd Street in College Point was designed by Morris Gescheidt and constructed c. 1857 for Herman A. Schleicher, a German immigrant. Little is known about Mr. Schleicher. He appears to have become a naturalized citizen in 1850 and died in College Point in 1866. John Jockers, who for many years had been superintendent of the Schleicher residence and grounds, purchased the property around 1892 and converted the house into the Grand View Hotel, an establishment which continued in operation until the early twentieth century.

Beginning in the late nineteenth century, Schleicher’s once sizeable estate was divided into lots leaving the two and one-half story, Italianate-style brick mansion with rusticated brick basement and mansard roof isolated on a circular lot at the intersection of 123rd Road (formerly N. 14th Street) and 13th Avenue (formerly Schleicher Court). The asymmetrical front (western) elevation features a three-bay-wide porch (now enclosed) with stoop leading to a segmental-arched entrance and segmental-arched fenestration with brick surrounds. The corners are delineated by brick quoins, which are repeated on the recessed wing. The rear (eastern) elevation features an arrangement of alternating flat and angular bays, the later with rusticated brick work. The segmental-arched rear entrance with high stoop and pedimented portico (a later alteration) is set into one of the angular bays. The rear and side elevations like the front elevation feature segmental-arched fenestration with brick surrounds, a deep cornice and dormers.

The area of College Point north of 14th Avenue was once home to several estates with large mansions; the Schleicher Mansion is the only one to survive relatively intact. Although altered in the twentieth century to accommodate its conversion into a multiple-family dwelling, the Schleicher Mansion remains a fine example of the Italianate style that was dominant in the mid-nineteenth century.
Posted by Queens Crapper at 12:52 AM

I am so happy to hear this news.Surely this Mansion deserves to stand tall...it has been thru sssooooo much history!!And we are finally close to returning home....there is no place like home!!

About as clear a reason as any as why CP is the way it is.

I gave up on College Point and NYC when Flessels closed. Now they can blow the whole place up for all I care. What a disgrace.

what a terrible thing to say...maybe if it meant that much to you....you should have fought for it to become ''landmarked''.it is a shame,but to say they can blow College Point up now...i will pray for you...