First time in a classroom - at age 16 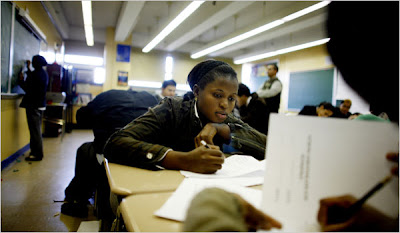 New York City classrooms have long been filled with children from all over the world, and the education challenges they bring with them. But hidden among the nearly 150,000 students across the city still struggling to learn English are an estimated 15,100 who...have had little or no formal schooling and are often illiterate in their native languages.

More than half of these arrive as older teenagers and land in the city’s high schools, where they must learn how to learn even as their peers prepare for state subject exams required for a diploma.

New York is one of the only states to identify these difficult cases, classifying them as Students with Interrupted Formal Education, but state education officials do not offer a suggested curriculum, provide any additional financing or track their progress. Last year, New York City provided a total of $2.5 million to 53 schools with large populations of these students — about $165 extra per person; they are entitled to the same extra services as others who are still learning English, but nothing more.

The number of students classified this way has swelled 50 percent from a decade ago. According to the city’s Department of Education, the graduation rate of these students in 2007 was 29 percent, less than half the city’s overall rate of 62 percent.

This is one of the saddest stories I have ever posted on here. What the hell do we do about this?
Posted by Queens Crapper at 12:52 AM

It's sad but why is always's our problem as NYC resident taxpayers?

Somalians are in Maine.

Don't get out much, do you? In fact, have you ever been to Iowa or Kansas?

The feds DO try to "spread the poverty," in a sense, when they accept refugee populations into the U.S. Cambodians in the '70s through '90s are a great example of this. They were relocated to (I believe) all 50 states, or at least most of the lower 48, in rough proportion to total population.

And these populations tend to relocate quite flexibly as time goes by. As george has stated below, Somalis are apparently in Maine. And there is now an enclave of them in Iowa to replace the hispanic illegals recently chased out of the kosher meat plant.

Is it wrong of me to ask if any of these young people are illegals? They have needs, yes. But are they legitimately our problem?

Well its a shell game because if the government pays for them, then its us paying for them.

The point is why are the American voters competeing with these people for housing and jobs.

Why are our taxes diverted to take care of them.

Just so rich people can have a pool of renters and employees to expoit? The Democratic Party can fill a background with them when they announce yet another welfare state program?

And why should this be our problem? They are not even citizens? Come on....give me a break.....

Once we allow them in they become our problem.

Why should the taxpayers be burdened with these "students?" Let them stay in Somalia.