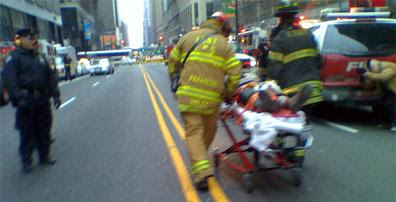 He was working on some scaffolding at 501 42nd St. when the load he was lifting collapsed on top of the scaffold causing some of it to pancake on top of him.

They just took him by ambulance to Bellevue Hospital, and the fire chief on the scene here believes that he may have a broken leg, but it could have been a whole lot worse. The mobilization here was massive, and East 42nd St. is closed between Madison and 5th Ave.

It was worse here is web cam of the accident.

was this an illegal immigrant day laborer? I wouldn't be surprised at all.