Parking perk still part of the job for pols 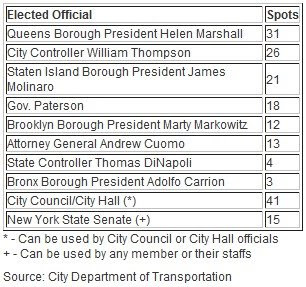 But city officials decided to leave in place nearly 200 spaces near City Hall and borough offices for borough presidents, the city controller and state officials like the governor and attorney general.

The Gotham Gazette has more about the continued abuse of parking placards by city employees.
Posted by Queens Crapper at 12:03 AM

How many permits does Helen Marshall need - 31 - you must be joking - what is she doing to deserve this - occupy space?

This is more proof that the Commissar has no control at all over the city agencies he was hired to manage. He cannot - will not - manage the misuse of parking spots by his appointees and fellow electeds.

Watch him roll over on the ordinary citizen who parks a few moments overtime at a meter, or who fails to pay the ticket.

And this Commissar claims that he - and he alone - is the one we must have to steer the city away from financial disaster.

Look at all the failures who have taken our tax dollars to "rescue" their companies, and then go on to continue failing miserably, while living luxuriously on our money.

Now, the Commissar is proud to add his name to that list of failures by taking $4.5 Billion more of our "rescue" dollars. He, like all the other failures will still raise taxes and spend lavishly.

He is a moron. Dump him.