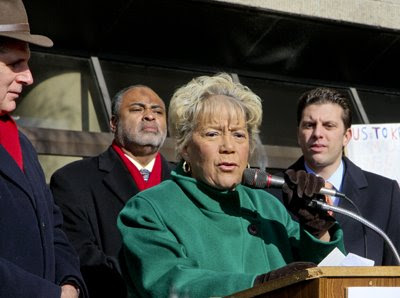 Today's MIH rally drew a couple of hundred people from the community and of course, a bunch of tweeders. James Gennaro was the MC, and Helen Marshall, Eric Gioia, William Thompson, Vivian Cook and Shirley Huntley spoke, along with community leaders. They whipped the crowd into a frenzy by demanding that the government "fund hospitals before ballparks", with everyone apparently forgetting that these were the very morons who pushed for and voted to fund the ballparks before the hospitals.

James Gennaro did a roll call of elected officials who support keeping the hospitals open, and mentioned everyone except Tony Avella, who organized the City Hall rally. Why? Word at the rally was that Gennaro's Chief-of-Staff press secretary (is he still dating one of the Queens CAU directors?) called organizers at St. John's and went apeshit on them for seeking help from Avella and not Gennaro. If the tweeder currently occupying the 24th Council District seat had been in tune with his constituents instead of being preoccupied with making sure that the 11th Senate District was left with no voice, he would have taken it upon himself to reach out and arrange the City Hall rally. After William Thompson left the podium, Gennaro started chanting, "Thank You, Bill!" until the crowd went along.

WTF? Grow up, Sleazeball. This is not the time for petty politics.
Posted by Queens Crapper at 1:42 PM

Political rallies, photo opportunities, political rhetoric....more bullshit. Is anyone actually developing a real strategy or proposal to keep these hospitals open? The hospitals are buried in debt with significant infrastructure issues, and quite frankly they cannot provide a quality service. Do they really believe that the State can take on more endless spending to keep a hospital open that has been failing for several years? Wake up call.....the closing of these two hospitals is beyond the scope of local politicians spitting out rhetoric that will not go beyond the grounds of the hospital.

Maybe Malcolm Smith needs to use some of his campaign money and take a flight to D.C. to appeal for federal funding.

Off-topic, but Gennaro embarrassed himself beyond comprehension at Friday's public hearing on Intro. 658, the bill to ban horse-drawn Carriages (sponsor: Avella).

This guy oversees the Consumer Affairs Committee? We are screwed. Plus, he doesn't know how to act!

On 5/11/07, over $6,500 (over $28,500 wtih contributions matched) was receivd by CM James Gennaro from the carriage drivers and owners to introduce a bill that benefits a small group and hurts the city and the horses. I do not want my public funds use to match these contributions for this corruption and abuse. NYC comptroller Audit clearly states more inspections are needed and Gennaro bill will limit inspection to "not more than once year" less than twice a year. Also Gennaro will increase the drivers' rates when these horse have no mandatory retirement home. Also these drivers overcharge tourists anyhow. This bill is seems a backroom dealings between Gennaro and the carriage industry.

Do call James Gennaro Office and tell me to stop bill 653A which harms the city and the horses. And instead he should support Intro 658 to ban horse drawn carriages
http://www.youtube.com/watch?v=HVX-vffgOTA

Whoa..... doesn't Gennaro have a female Chief of Staff?

....and the CAU Director is engaged to a fellow from Massachusetts...

And here I thought Gennaro's spokesperson was an Indian guy. And he definitely was dating that Vermont loser. Ask any of her reporter friends.

Helen Marshall: Pronounces Caritas as "Cateress" and says Malcolm Smith will be the savior of the hospitals. Man, she really needs to go.

You have to love Queens. The crowd ate this B.S. up as if the tweeders were some kind of heroes and started chanting "Yes We Can." Well you can't if the Majority Leader is in bed with the hospital board.

Be nice to Gennaro's chief of staff- as recent trends show, she will likely be his party-picked successor, similar to Ferrerras.

What happened to Shams?

These people their press agents, writers are so fulla shit.

People need to go back at throwing rotten tomatos like during in the Lindsay mob.
Then throw them all OUT like the double crossing Bush Mob

It's like a big self-serving circus to these people. I don't think they give two shits about what happens to any of us, only their own quest for power and greed. Eventually, at this rate, our great city will die. Only the poorest that cannot leave and the wealthiest in Manhattan will be left. We need to vote in anybody who is not connected to any political machine if we want to give ourselves even half a chance.

Democrats, Republicans, two sides of the same coin. One party just FO's up a little faster than the other.

I say PULL THE FLUSH CHAIN ON THEM ALL and start over.
Ya can't possibly do any worse than the douche bags that are already in there.

Also sh*t can all your newspaper subscriptions the owners, editors and people are just as bad.
Hit is where it hurts them !

Do like they did in Greenport !
The people tossed the tweed loving mayor & penis posse out on there ass so hard they all moved to Boston.

Now that we are all pissed off, we all should stick our heads out of the windows and scream......"we are not going to take it anymore." My message to the hospital workers is to charter a bus to D.C., bring friends and family and draw national attention to the closing of two community hospitals. Screw all of the political rhetoric and bullshit....you hold the key to keeping these institutions open.

Amen. Embarrass the shit out of the tweeders on all levels of government.

Thanks, Anonymi, for the clarifications. We know who's who now!!

Be careful using titles -- PR folks are not generally Chiefs of Staff. Have to agree that the media holds a huge responsibility for *X@#!* with the constituents!

yes it may be off topic, but han a total embarrassment at the Friday hearing of two carriage horse bills. He was downright stupid. If Gennaro was more t he were not so transparently political, one might feel sorry for him. How did he every win an election. Common Queens people – can’t you do better than him? This latest pettiness is indicative of his persona.

To begin with, he sponsored the bill for the carriage drivers, then removed his name. They should have been angry with him. He does not know which way the wind blows. He badgered a speaker who represented the NYC Bar Association to try to get her to admit that her statement was that of only a few people. WRONG. This is a prestigious organization, which Mr. Gennaro could not get into if he begged and paid them. This woman was cool and held her own. He was roundly booed. Gennaro is not fit to hold public office.

BTW - Tony Avella gave a stellar appearance. He and his office know the issues and asked some tough questions. What was really ludicrous - at one point the person representing the Department of Consumer Affairs did not even know how much the drivers charge how. This is what they get paid for. Didn’t they prepare for the hearing? They also ignore complaints about their blatant overcharging, which is on youtube.

Reality check, the City Council hearing on Friday regarding the city's iconic and strong carriage industry was another example of what a complete freak and creep Tony Avella is. He and his tiny band of animal rights nuts had not one fact or truth to present, nor any crediblity or decency. The horse carriage representatives and supporters made Avella into the fool he is, as did the press. Anyone catch Good Day New York Friday morning? Avella looked like an a**. But that's nothing new for him. Bye bye, Tony. You are disgrace. Go Gennaro!

Horses crap in the street and mix with dangerous traffic. They are an outmoded form of transportation and need to be banned.

Horses will be here forever. Tony Avella will fade into oblivion this year and I am sure will end up flipping hamburgers at Burger King (to the dismay and anger of the animal whackos that "support" him). Ps, anyone check out his staff lately? They are as freaky as he is.

If we want horses to be here forever, we need to protect them from our city's busy dangerous streets.

"Horses will be here forever. Tony Avella will fade into oblivion this year and I am sure will end up flipping hamburgers at Burger King (to the dismay and anger of the animal whackos that "support" him). Ps, anyone check out his staff lately? They are as freaky as he is."

Whoa, is that nasty! Or maybe, just maybe, he'll become mayor of this city and run a certain councilmember outta here....Gennaro. Stranger things have happened.

To CM Gennaro(who I can bet is here making some of these stupid comments):

If I ever here you're in my 'hood again knocking on doors begging for votes, I'm going to booby-trap my house.

Um, Italian Girl, bad news for you...hope you are sitting down for this one...Tony Avella will never ever be the Mayor or elected into office again for anything..not even dog catcher. Sorry, babe. Wake the f**k up.

Um, alright, maybe mayor is far-fetched. But I can guarantee at the very least during his campaign, he'll call out people like Bloomie and Quinn and all the bullshit they've dealt out. And you too Gennaro.

And, who you callin' babe?

Italian Girl, so glad to hear you are in reality about Avella NOT EVER being elected again. Say, buh-bye.

Special note to Avella "staff"....leave your tenure with that creep off of your resumes if you ever want to work again. Having a complete lack of skills, morals and values will be tough enough in this bitter, jobless economy...you don't need more negatives to present to future employers.

I suspect you have a *personal* issue with Avella. Am I right? No one hates the guy THAT much.

And what do you care about his staff? They're no different than any other twenty-somethings that have bigger plans than to answer phones for some councilmember.

How come you guys don't link ROOM EIGHT NEW YORK POLITICS (www.r8ny.com) as a link? This blog has been in operation for three years and gets the highest readership in NYC. Is there a reeason for this oversight?

Room Eight has been linked to on this blog multiple times. Don't know where you've been, pal.

Eric Gioia is the biggest media whore on the planet!

Gennaro, you suck shit. Go away, you developer's whore.

Will ya just look at those mugs!

No wonder we're all in deep doo-doo!