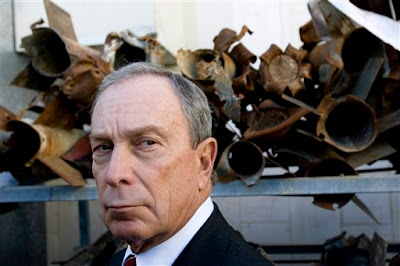 Sorry to have to drop this bomb on you (pun intended), but our wonderful Mayor is trying to pull a BIG fast one on us.

Was directed to this Carroll Gardens Courier article by by Lost City:

Community input has always been a key feature of the city’s land use decision-making process.

That, however, could be stripped away in the near future, as revisions to ULURP (Uniform Land Usage Review Procedure) are reportedly going to be looked at by a City Charter revision panel that Mayor Michael Bloomberg is expected to put together next year.

According to an informed source, who attended a discussion of the issue at a meeting held by Manhattan Borough President Scott Stringer, the goal may be to shorten the lengthy ULURP process, which mandates review of zoning changes from the local through citywide levels over a specific period of time.

“There is a persistent rumor that the mayor is going to be doing a charter revision commission and one of the things that has been rumored to be on the table is rewriting ULURP, specifically the community board’s and possibly the borough president’s role in ULURP,” noted the pundit.

“In their mind, they want to ensure that development goes as quickly as possible, particularly in this economy,” noted the source. “Now, they have to wait 200 days to go through ULURP. What if they could get their shovels in the ground after 60 days?”
Posted by Queens Crapper at 12:58 AM

Maybe he can speed up the development
of the Gaza Strip!

You know, taxpayer is right. Bloomie does look like a turtle.

So where in the hell is the presevation community?? They should be using this opportunity to go after development and try to change things.

Oh, no, that will not happen. The very heart of those communities (whose taxes we are protecting with landmark designtion) are filled with developers, investors in real estate, property holders of human baracks.

Its in their best interst that develpment still occurs and since it will not be in their communties, they only will profit from it.

they should have bomb his ass

Where are the civic groups around the city: QCC? front and center!

It remindes me of the comment Hitler said when he discovered one of the armies rushing across Germany in 1945 was French.

"I thought we defeated them"

because we need every roadblock possible to stop it.

do you want every community to look like Dutch Kills where everything is always on the fast track.


ok biggie i see your still anonymous .city hall wont let this happen and any way he will not get a 3rd term,

SEND ALL FIREANTS BACK TO ISRAEL !
Next time dont vote for them !
Jew's base their lives on accomplishments and want to surmount & re-make everything.
Good deeds, preserving trees and heritage mean nothing.

Speeding up rules for development isn't going to magically make money fall from the sky to build all of this shit. Bloomturd is clearly delusional.

Not to raise alarms, but, has anyone heard talk that they want to eliminate Community Boards? I thought I read that in a local paper and then heard nothing again.
(Oh I know they WANT to...but are they actually going to TRY to?)

Bloomberg run's the editing & assignment desks via remote control.
No reporter dare cover something without an assignment on compay time.

If a reporter goes off company time he or she must still submit the story to "the boss"
The story then becomes property of the company and gets tossed in the trash.
Its called curruption and stealth goverment.

The Billionare Mayor from Boston was the worst thing to ever happen to the city.

Not to raise alarms, but, has anyone heard talk that they want to eliminate Community Boards? I thought I read that in a local paper and then heard nothing again.
(Oh I know they WANT to...but are they actually going to TRY to?)

---------
As far as Astoria is concerned it would be a blessing. Then the area north and south of Astoria Blvd would be on equal footing.

Hey Bloomberg: When are you going to get DOT to finally resurface Queens Blvd? It was supposed to be completed 2 1/2 years ago. It is a disgrace!!! Also, when are you going to stop all of the illegal construction going on in Queens? I'm sure the FDNY still needs a few more years to catch up on its inspections. You are putting lives in danger--- never mind Israel.

COME ELECTION TIME....VOTE HIM OUT!

Yes, he is eliminating the boards by cutting and cutting their budgets. There are many ways to distroy.

Queens Civic Congress
is worse now than it was under
Sean Walsh!

I guess your political consultant's title keeps you and your numb-nuts group from taking any real action
lest you offend the clubhouse.

corey's too busy stuffing his face with cakes and cookies.