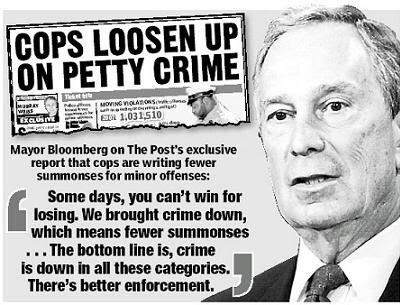 "Some days, you can't win for losing. We brought crime down, which means fewer summonses," the mayor said. "The bottom line is, crime is down in all these categories. There's better enforcement."

A Post analysis put the actual losses at around $30 million; excluding parking tickets, the loss is around $10 million.

Oh, and if people are better behaved, then why are they lighting up inside bars and restaurants, something which has been illegal since the middle of Bloomberg's first term?
Posted by Queens Crapper at 12:38 AM

Of course less summonses. Why?

1. No response to Quality of Life Complaints (they also lie to 311 about responding). You police may not know that when you call 311 with a complaint you can request a verifying e-mail. After 24 hours you can call 311 and find out if and how it was resolved.

2. No response or refusal to do a report on more serious crimes.

Ironically, today I was jumped on by a neighbor and thrown against the wall and then she went after my dog (I'm a 73 year old female). Police responded quickly but one officer immediately started to bullying me. When they found the attacker same officer continued the offensive remarks to me and refused to do a report saying "I will only do a report if I take you both out in handcuffs".

I have supported the Police my whole life. But no more. Tomorrow I resign as Block Watcher.

We all know under Guillani the reports were doctored. I beleive it's even worse now.

Any takers on a wager that the preceding poster is a whiney jew?

What about the comment makes you think that? The woman says she was jumped on. And what difference does it make what nationality she is?

This reminds me of a school district where I used to work, in which the Superintendent told principals not to suspend children, then congratulated her administration when the suspension rate dropped.

"...one officer immediately started to bullying me. When they found the attacker same officer continued the offensive remarks to me and refused to do a report saying "I will only do a report if I take you both out in handcuffs"."

I hope you filed a CCRB report.

Sounds to me like we just got half of a story, and the officer that responded got the rest of the story from either the other person involved, witnesses or both. Finally, it sounds to me like it may have been revealed at the scene that our poster may not have been the innocent victim of a random crime that she made herself out to be, and is twisting events to her benefit, and choosing to bash the responding officers because they found out the whole story, and didn't believe her one-sided version of events.

Let's talk about the facts:

Patrols are down, and Compstat has destroyed the NYPD. Discuss.

Patrols are down, and Compstat has destroyed the NYPD. Discuss.
-----------------------------------
That pretty much sums it up. They just did away with 48 cops who did train patrols in Queens during the after school hours and late nights. About 12 of them were sent permanently to Rockayaw, and from what I heard about 6 transferred to non patrol duties in Manhattan. 18 less cops on the train, and God only knows what they did to the other 30. Every cop who can is packing it in as soon as they can, and the Mayor can only get a class of 250 in. That doesn't even make up for the retiring cops, or cops leaving for other departments. This smoke and mirrors trick Bloomberg and Kelly have been playing is about to come to a tragic end!

The cops are warned, God help you if you take a complaint for Robbery, Burglary, Grand Larceny, or any other offense that will bring the CO's numbers up, and make him look bad at compstat. If the cops are either brave or stupid enough to turn in such a complaint, it is normally downgraded by the desk officer, who has to review and sign off on all complaints. If the axe falls, it falls on the cops or the desk officer. The Commanding Officer, Commissioner and the Mayor can feign ignorance. This is how they are keeping the crime stats low. Still feel safe????

The police or 311 complaint number dont respond to people on the block playing loud car bass for hours and cant even have a car drive down the street to be seen.I sympathize with the first comment.We had some thugs on the block and still do but over a year ago they stared down me and my girlfriend and harrassed people who walked by and the police came, but not until the third time the police came when they were picking fights for the fun of it did a cop actually come and have the good sense to tell my landlord to not let those neighbors on the property.The third time the cop came he reminded by landlord he could lose his property if he didnt take the matter seriously.The first two times needless to say the police barely cared at all and those thugs on the block have records.

This guy is so full of himself.Has he ever walked different neighborhoods out of the Upper Eastside?
Never.He never even walks outside of attending a city promotion event with guards on each side.