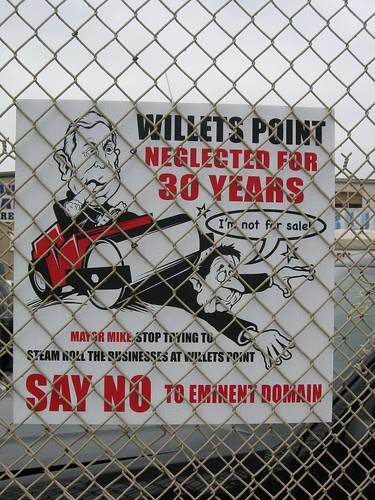 In response to Seth Pinsky’s Op-Ed, I ask: Why do all the businesses have to be moved? Let’s call in an environmental expert not hired by the city and see what they say. I bet it will be a different story than Seth and EDC are trying to put out there. You see, we have people at Willets Point who are in that business and we know it’s a false excuse to get people off their property. Another false excuse is the 100-year flood plain.

Now I ask: If Willets Point had not been neglected by almost everyone who is for this project for the last 30 years, and just say it was not blighted as is charged, and didn’t need to be remediated as they say, would it then still be necessary to tear down Willets Point just for the flood plain? My guess is no. So all we have are lies on top of lies to try and justify a land grab.

Mr. Pinsky also states that the EDC has had numerous negotiating sessions with the businesses of Willets Point. Then I must ask why, after 1 ½ years, did they only sign the 4 easiest businesses to move?

1) Empty land owner
2) A small 4,000 sq ft guy that just parks a tow truck
3) A guy that needs no permits and just a tin shack to recycle his metal
4) Sambucci, who just has cars on his property to be moved and was 77 years old and was scared for the financial security of his kids after he is gone

We’re all scared for our families and our future but are determined to fight to get what’s fair – the streets, sewers, street lights and services that we have been paying for. On 7/31/08, Helen Marshall was on Bloomberg Radio and said, “We (the city) didn’t neglect the area. Look at the pictures and you see the tires on the street? Those are not the city’s tires.”

True, but it’s the city’s job to find out who dumped the tires and arrest them. If I dumped a load of tires in front of Helen Marshall’s office, would action then be taken to catch the culprit? That’s the crime here – that the businesses know the city did this intentionally by not fixing the streets and putting in sewers even though their own study in 1993 said to do it.

Ask Claire Shulman why she didn’t do it and her answer will lead you to the answer of why conditions are the way they are: “I had better things planned for Willets Point.” And this plan is her better thing, and that’s why it’s been neglected so it would get to the point that we are at now.

The businesses at Willets Point have had enough. After years of neglect and now lies on top of lies they think they can steal our land. Now the city wants to be rewarded for their dirty deeds. What better way to end eminent domain abuse AND the Willets Point abuse than a smashing defeat at the hands of the City Council?

The City Council must stand up and not be scared of unions and developers and a lame duck mayor and do what’s right and send this concept down in flames and then force the city to finally provide the services that Willets Point has waited 30 years for. Always remember if they can do it to us then nobody is safe. That’s the scary part and the only part that means anything in this whole mess.

Photo from d.p.Hetteix's photostream on Flickr
Posted by Queens Crapper at 12:36 AM

Wasn't "BLIGHTED" the same
tired old excuse that the Shul/Manes administration used for allowing Flushing to be over developed
in a haphazard and piecemeal fashion?

Huang/Manes/Shulman:
The triad of the historic RKO Keith's destruction!

Dump a load of tires in front of
pussy boy Bloomberg's east side mansion!

I wonder what Blomberg's CAU fetch it-boy Barnes has to say about W.P.

"Parkside" is the dark side for sure!

lets remove the streets by claires house and clog her sewers and start dumping tires in front of her house and lets see how long it takes before the problem is fixed. my guess? 1 phone call not 30 years

Jerry:
I say embarrass that crap out of Helen Marshall for not standing up for you guys. What a disgrace! I really hope the city doesn't get their way. Otherwise we're all doomed. The city will continue to do this all over Queens and the city.

Maybe with some of the money Claire's making off Willets Point, she can get some better fitting dentures.

Where does the arrogance come from?

Why does any politician or municipal employee think that he or she knows how to run a business better than the person who actually owns that business?

Why does any politician or municipal employee think that he/she has better ideas for the private property owned by someone else?

Would any of us allow our next-door neighbor to command us on how to use our basement, or yard, or where to send our kids to school?

Not on your life.

Business expertise is the product of desiring to profit from our own effort, and the willingness to take and manage the risks related to that effort. What expertise does any politician offer?

So, what drives these politicians?

They expect to profit from their efforts to take land away from legitimate owners and transfer it to already wealthy developers. These developers don't care about the community where they rape.

The politicians don't either. But, they will perform the dirty work of stealing on behalf of the rapists, in the expectation that they will be rewarded handsomely for their meager effort.

After all, stealing takes no brains, imagination, or actually much effort either.

What politician (or developer) has any of those traits?

THE ARROGANCE COMES FROM US ELECTING THEM , NOW THEY THINK THEY OWN US ONCE THEOR IN . THE PEOPLE MUST RISE UP AND TELL THE POLITICANS ENOUGH IS ENOUGH THEN THEY WILL STOP. UNTILL WE CONFRONT THE DEVELOPERS PAYING THE POLITICANS ( CAMPAIN CONTRIBUTIONS UNDER ALL THEIR FAMILY & WORKERS NAMES SO THEY CAN SEND LARGE SUMS TO THESE CROOKS)AND THE POLITICANS FOR ACCEPTING IT THEN NOTHING WILL HAPPEN. AND DON'T FORGET THE RAT UNIONS TOO THEY ARE WORSE THEN THE POLITICANS,HA HA AND IM A UNION GUY AND THEY MAKE ME WANT TO THROW UP. GO GO WILLETS POINT KICK SOME ASS . START 1ST WITH CHUCK APPELIAN THEN CLAIRE SHULMAN THEN HELLEN MARSHALL. THEY WILL FALL LIKE A TON OF BRICKS