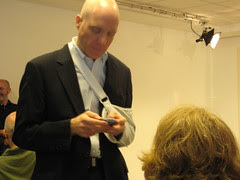 John Gallagher, who served as first deputy press secretary for Mayor Bloomberg until he quit in early June, is moving into the real-estate and development business, taking a newly created job with the title Director/Vice President of Public Affairs for Tishman Construction.

Mr. Gallagher's not a stranger to the development world; his City Hall job included work on economic development, PlaNYC and the city budget. He starts his gig at Tishman early next month, according to a person familiar with the situation.

The move comes as the city is tightening its oversight of the construction industry, an industry where Tishman is a giant, responsible for building the Freedom Tower, the new Goldman Sachs headquarters and the Bank of America tower near Bryant Park. Tishman—a separate company from megalandlord Tishman Speyer—also has a development arm, and has plans for a hotel on Eighth Avenue and 44th Street that needs some city approvals.

Mr. Gallagher, who came to City Hall in 2006, worked previously at the Lower Manhattan Development Corporation, on Jeanine Pirro's campaign for attorney general, for the Senate Republicans and for the Assembly Republicans.

Tishman is a piece of shit! The firm tore down a former Vaudeville house called the Ideal Theatre (Playpen Theatre) at 8th & 44th, and violated legislation protecting theaters in that area. He wasn't willing to give in to a viable financial plan to save it. Proof of how the Bloomberg Administration is beyond hope.

NYC has been in cahoots with Tishman for countless decades.

So now a Bloomberg boy goes and works directly for them.

Keep on casting your votes for bozo candidates like Mayor Mike, Crowley, Katz and that Stavisky
scum and you'll continue being tweeded until you find yourselves totally disenfranchised and out on the street one day!

The voting public must bear the final blame for their own exclusion
and possible extinction.

What a stunning surprise. A municipal employee with strong connections to Commissar Death and Taxes now takes a job with a developer.

Who would have ever expected such a payoff?

May we keep adding until some justice is served. I pray it will be no more. These are the individuals who scarred our beloved city, just naming a few.

how about adding the city newspapers, city council, boro halls, and the preservation community?