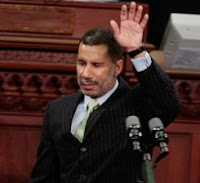 "I don't think the state can really afford to do very much for anyone, least of all legislators, right now," Paterson said.

Legislators, whose base pay is $79,500, have gone without a raise for about a decade.

Lawmakers, particularly Assembly Democrats, have been pushing for an increase since last year.

A number of Assembly Democrats expressed surprise at Paterson's comment, noting they will not be eligible for a raise until 2011, at the earliest, if it doesn't get done this year.

That's because a sitting Legislature cannot give itself a raise.

"He used to be one of us," said Assemblyman Michael Benjamin (D-Bronx), noting Paterson was a state senator for two decades.

Therefore, he knows how much you don't deserve a raise, Mike.
Posted by Queens Crapper at 2:58 AM

WTF....I'm on fixed income.
I haven't had a decent raise in years!

When the Social Security Administration decides to give me a reasonable raise in benefits to cover
my real cost of living, then I'll support
those crooked Albany pols getting theirs.

Welcome to the club old boys....mine....
not your political variety!

Let's see if the legislature gets pissed enough to now put the kibosh on the congestion tax plan of Bloomberg's.

Any ordinary driver will end up being taxed approx. $2000 per year to drive to work daily, plus visit the city evenings, and for medical reasons.

Never forget that the tax will never stay at $8 per trip. In London, it has already tripled, quadrupled. So, start multiplying that $2000.

Congestion tax NEVER. If legislators vote for it, raises NEVER!

His campaign is heavily financed by Wall Street.

Now I don't know who I'm voting for.

Well I guess that seals it...I'm not voting this presidential election...was gonna vote for Obama, but now this "support" for congestion pricing. Congestion P. benefits the big-wigs at MTA; only to have any overhead expenses from companies that make deliveries be passed down to the consumer... FUGHETABOUTIT!!!!!!

"2/3 of NYers support congestion pricing">>>Riiiighhht,So that means, you believe that the revenue will go, in its entirety, to help mass transit. Judging by the way Bloomberg's administration works, I highly doubt that.
As per the Quinnipiac University Poll (March 24,2008)...New York State voters oppose 50 - 33 percent a proposal to reduce New York City traffic by charging a fee for vehicles driven south of 60th Street in Manhattan, according to a Quinnipiac University poll released today.
But voters statewide support congestion pricing 60 - 30 percent if proceeds from congestion pricing fees are used to improve mass transit in and around New York City, the independent Quinnipiac (KWIN-uh-pe-ack) University poll finds. New York City voters support the plan, if the money is used for mass transit improvements, 67 - 27 percent, while suburban voters support it 51 - 43 percent.....

Taxpayer said
Any ordinary driver will end up being taxed approx. $2000 per year to drive to work daily, plus visit the city evenings, and for medical reasons.

1) So don't drive into the city below 60th Street everyday. Take mass transit or carpool.

2) Visiting the city in the evenings, you don't have to pay the congestion fee.

"So don't drive into the city below 60th Street everyday. Take mass transit or carpool."

Many of us don't have that option. I like how "only 5%" of Queens commuters will be affected. That's a shitload of people.

Is it 2/3 of New Yorkers
or 2/3 of Manhattanites who support it?

Most people in Brooklyn and Queens are against it!

You must work for Der Mayor's machine fella!

There are 5 boroughs that make up Greater New York
the last tine I counted!

"Many of us don't have that option. I like how "only 5%" of Queens commuters will be affected. That's a shitload of people."

There is the option of driving to a place where you can take mass transit. "Many" of you need to rethink of options beyond parking your ass in your car. Or are you afraid of getting the cooties from the tweeded?