Is there a shortage of inspectors? 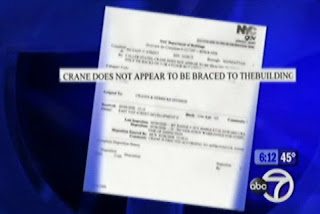 Are there enough crane inspectors in NYC?

The falsification of records, city officials insist, had no impact on the crane collapse. But some argue it is a symptom of a broken system where serious complaints get short shrift and greedy builders cut-corners.

"I was shocked and dismayed," Bruce Silberblatt said.

Silberblatt, a retired contractor, says it's getting harder to believe city leaders about the safety of the cranes that fill the skyline when inspection records are being falsified.

"You really do not know anymore, and we are very concerned," he said.

Silberblatt filed a complaint about the ill-fated crane being unstable just 11 days before its collapse. But court documents say the inspector never checked the crane and instead falsified records, indicating it was OK.

"The fact is that that just undermines anybody's confidence in the inspection system," Silberblatt said.

Was the inspector just being lazy? Or did he falsify records because he was overwhelmed by a construction boom that has too few inspectors chasing down too many complaints?

Add to the lack of oversight a system of self-certification, an honor system that allows developers and engineers to certify their own construction plans without getting inspector verification.

"I think it is dangerous," Silberblatt said. "It is like the wolf taking care of the chicken coop."

And how about this?

The city’s Buildings Department has begun a comprehensive review of other construction jobs that were approved by an engineer who has been charged with lying about his inspection of a Bronx building that collapsed in 2006, killing two firefighters.

A city report on the collapse found that the engineer, Jose D. Vargas, who approved renovation plans for the Bronx building in 2001, never completed a required final inspection to make sure the job met the city’s building code.

A Fire Department report concluded that had Mr. Vargas completely inspected the building, he could have detected rotten pillars in the basement that caused the collapse. Mr. Vargas was charged this month with lying to investigators looking into the collapse of the building, a discount store at 1575 Walton Avenue.

The review reflects broader concerns among city regulators about a program that allows engineers to certify construction projects with little city oversight. Tens of thousands of such projects are approved each year, and in a significant number there is no evidence that the engineers do final inspections to ensure that work meets city building codes, officials say.

And the Post reports there are ONLY 2 INSPECTORS TO EYE 250 CRANES
Posted by Queens Crapper at 12:42 AM

This is an emergency situation, is it not.

Bring in the army engineers and military experts before we have a catastrophic crisis.

funny how there is no shortage of traffic cops.

Added to this is DOB's long list
of crooked building inspectors
who've been on the take for years!

I think we can safely conclude
that this dangerous situation
has reached epidemic proportions!

And, of course, a building moratorium
would be out of the question
until all new construction is rechecked.

Nah.....that would just slow down
all the political kickbacks.

The city council ain't gonna vote for that!

Although my building shakes like an Aspen in a hurricane, and construction has goes on all hours and days of the week as it has for a year +, every one of dozens of complaints to the Buildings Department has been marked "unfounded". Until we require that developers and inspectors live in the same "safe" buildings they inspect or build more lives will be lost. Invest in Funeral Home stock now!

Thanks for the informative post. I came across www.confidencebuildingcourses.com recently and i found out that they have plenty of guides on building confidence. I find it really useful. Any opinions?