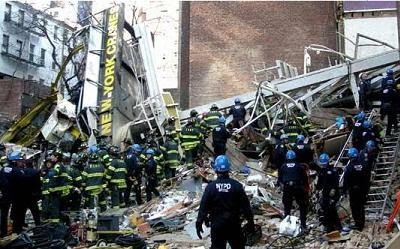 NEW YORK (WABC) -- A New York City buildings inspector is accused of falsely claiming he inspected that crane that collapsed on the East Side, killing seven people. Now he is facing charges.

His arrest was announced at a news conference Thursday afternoon by Building Department Commissioner Patricia Lancaster.

At the news conference, city officials said that inspector Edward Marquette admitted to the Department of Investigation that he did not inspect the crane, although he claimed to have done so on March 4th, days before the deadly collapse.

He was charged with falsifying a business record and offering a false record.
Posted by Queens Crapper at 3:44 PM

How much other paperwork was faked? Who else is in danger?

Hey Dumberg, the truth is out there and the people are starting to open their eyes!!!

Who supervised this inspector? Who verified his work?

The chain of command leads right to Lancaster, then Commissar Bloomberg.

Both of these are responsible for the utter lack of integrity in DOB. Their crime: Depraved Indifference to Human Life.

Bloomberg, Lancaster and all those in the chain of command down to the inspector must be prosecuted.

Good !
Hopefully now the Feds are coming with microscopes to put up all the DOB's ass's !
It will all lead to the Mayor !!!
....Its always comes in 3's

Under whose watch was he hired? Why has Lancaster not taken any responsibility? Why has she not resigned?

LANCASTER IS A LOSER!!FIRE THIS FOOL!!LEAVE THE JOB FOR MEN PERIOD!!

Is this a normal violation now Mr. Mayor? The numerous complaints from neighbors about this site were not groundless, they were simply ignored and now seven people are dead. It's time to arm ourselves with cameras and expose the corruption that seems to be running rampant in this city.

As I first stated publicly to DOB representatives
at a Juniper Park Civic Association meeting
which was covered by the press:

POLYGRAPH YOUR INSPECTORS
several times a year
as they do with operatives in the security field!

It's the ONLY way to ensure they're not
falsifying reports or taking bribes from builders.

The DOB has had a longstanding problem
with corrupt building inspectors.

For instance,
I believe 14 of them were arrested
after a DOI investigation in the 1990s.

There will be other horrific events
like the crane disaster
if the DOB isn't properly policed
once and for all !

The problem is with the nature of the DOB.
Money tempts them too easily!

They're a bunch of crooks
and have been taking bribes from developers
for decades.

They are also in league with organized crime!

By all means fire Lancaster.
You can even impeach Bloomberg.

But that won't put an end to DOB corruption!

Some kind of ironclad system of checks and balances has got to be implemented.

This is a job for the FBI's anti corruption unit.

NYC's whole damn governing body
is under suspicion as far as I'm concerned!

There's more to this story, unless the inspector just falsified the inspection so he could take a day off. I doubt that's what happened. There's another shoe yet to drop here..

Patricia Land-Disaster" must GO enough of this currupt BS !!!

I cant wait till this inspector REALLY starts to sing !!!

Roll back all jobs approved to start - freeze all DOB construction with violations. Investigate the Dept. itself and make public full disclosers of results. Prosecute all levels of Government - turning a blind eye to laws and regulations. Eliminate individuals from developing orbuilding in the city with history of severe violation abuse, including passive investors.

To start with NO MORE work, hopping, scafolding, crains, removing trees on weekends, holidays when inspectors, DOB, DOI "related clubhouse flock" are not around or understaffed duty.

Bloomie has people now have MURDER ON their HANDS !!
And YES more New Yorkers have been killed then in a war zone Iraq !!
...Im sure Drudge is on that

I saw the Commissioner on the news conference. She is starting to look a little piqued.

We have a real crisis on our hands because of the DOB's dysfunctionality.

It's as bad as terrorism. The FBI needs to step in. If there is systemic corruption in our City agencies, it needs to be rooted out quickly. If our politicians are involved, we need to know.

In the interim, bring in the military and let them utilize their resources for an interim period. Presumably, they have the engineers, architects and other professionals to help protect the public in this scary time.

All the law suits that will be filed against the DOB due to this tragic collapse should be a big wake up call to the City. Once again, the taxpayer will ultimately pay for their incompetence. It is unfortunate that this had to happen to get some real attention to the matter.

It is incredible that Commissioner Lancaster still has her job.

Bring in the Governor--bring in the FBI. The building inspector's office has blood on their hands and it is time for people to do Federal time.