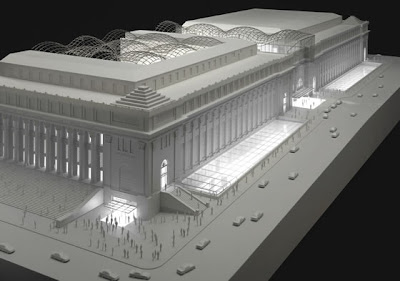 MSG backs out of Moynihan station project
BY ASSOCIATED PRESS

Madison Square Garden has backed out of an ambitious $14 billion plan to move into a landmark Manhattan post office building that would have become part of a new Penn Station.

Garden spokesman Barry Watkins says the sports arena has decided to renovate its existing location rather than move into the building that the state wanted it to share in the Moynihan station project.

The project would have paired the redevelopment of the station with development of new office buildings and shops around the drab neighborhood around Penn Station.

The project has stalled with uncertain funding in recent months, and the state official in charge of it resigned.
Posted by Queens Crapper at 2:49 AM