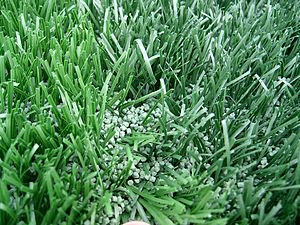 Legislation Would Erect Fence To Artificial Turf
Special to the Sun
March 26, 2008

City parks would not be allowed to install artificial turf for at least six months under legislation being introduced today by three City Council members.

The bill, sponsored by council members Eric Gioia of Queens, Letitia James of Brooklyn, and Maria Baez of the Bronx, would also ban the use of rubber pellets derived from old tires, known as "infill," in turf, and require that the city remove all existing rubber infill from any artificial turf used for recreational purposes within a year of its passage.

Environmental groups say the rubber infill may be a health hazard, containing chemicals that could possibly cause cancer and exacerbate respiratory illnesses such as asthma.

"This isn't an area where we can afford to take risks," Mr. Gioia said yesterday via e-mail. "The recycled tires used for the crumb rubber infill contain everything from heavy metals to carcinogens. We shouldn't be waiting around until someone's child gets sick before we act, especially when there are alternatives."

The city's Department of Parks and Recreation has installed 78 artificial turf fields in the last decade.

See also:
Council members push for removal of pulverized tires from city parks
Posted by Queens Crapper at 12:50 AM

Who in their right mind would favor aesthetically ugly turf that has the potential of making our society ill? Perhaps those who support it, are already experiencing its harmful effects. BAN IT FOREVER!

The door must have hit our doorman in the ass
and woke up his brain to do a turnabout!