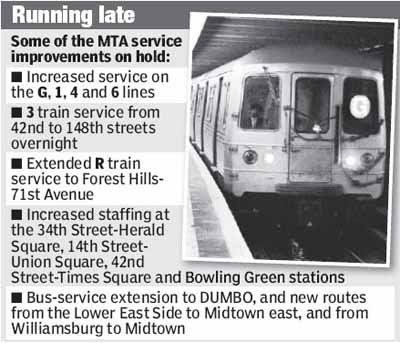 The MTA is flashing a red signal at $60 million in transit improvements the agency promised in return for fare hikes - blaming a downturn in the real-estate market.

The now twice-delayed enhancements include new and extended bus routes, longer hours of operation and increased service on many subway lines.

The MTA said it will hold off on the improvements until June to get a clearer view of the agency's revenue picture to decide if it will be able follow through on the promised benefits later this year.

More from the NY Times.

Here's a real way to remove unnecessary cars from the road. The first phase of it will hopefully be underway next year (unless they renege on that, too).

(Little confused about #3 in the Post's graphic since the R already goes to 71st-Continental Ave)
Posted by Queens Crapper at 9:18 AM

and we know that $350 million promised under congestion pricing won't go toward transit improvements either.

This is why Congestion Pricing is a bad idea.

It is just going to make Manhattan a gated community for the rich that can afford to live in the zoned area. They can ride around the city for free but all other New Yorkers and visitors pay....this is wrong....the money won't go to the MTA....you can bet on that. The MTA will be crying for a rate hike within two years and the fee for Congestion Pricing will be going up constantly as well. I hope our Councilmen don't fall prey to this horrible tax (oh I mean plan).

In other cities where congestion pricing has been imposed the fees have almost always skyrocketed from the "teaser" rates they first offered to entice communities to accept it.