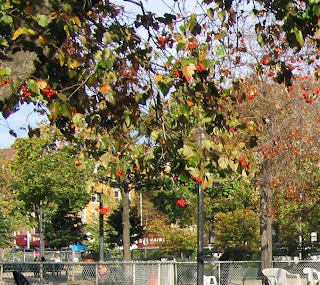 For the last 15 years, the people of 21st Street in Long Island City, Queens, have often visited a community garden tucked into a corner of Murray Playground... early one morning three weeks ago, four Parks Department employees with a large yellow earth-moving machine cut a hole in the four-foot-high chain-link fence that surrounds the garden and ripped up much of its middle portion, which was home to the garden’s butterfly bushes. They also tore down a latticework arbor, along with the wisteria and honeysuckle that climbed up it.

“Because it’s a public park and we had this rat condition, we really needed to go in and have these things exterminated.” - Queens Parks Commissioner Dottie Lewandowski
Posted by Queens Crapper at 8:41 AM

The "rat condition" that exists is Ms. Lewandowski!

As Clint Eastwood would say, "Hang 'em (her) high"!
(With those Wisteria and Honeysuckle vines that she had destroyed)!

This is exactly what park users will get from Parks Department officials who have their jobs (as Lewandowski does) based upon the violation of the civil rights of minority employees of the department.

If Lewandowski didn't cheerfully participate in the savaging of a minority's promotion, this "rat problem" probably never even would have occurred at all, because there would be another person administering Queens.

Bloomberg could still correct the problem (if he were a man) if enough people told him to "exterminate" the rats he has in charge of our parks.

Rats are a skyrocketing problem in western Queens:

4. Monday pickup which is frequently skipped with three day weekends

5. a population whose behavior creates unsanitary conditions (did I say that already? well say it again)

I wish they'd bring the yellow earth mover to my building in Elmhurst. Construction on the funky looking North Fork Bank on queens boulevard sent them to the side and back yard of my building. Now we have to duck and dodge them after the sun goes down as they scurry to and fro visiting their neighbors in the various expanding rat holes and pigging out on the waiting garbage.

Too many of the 2 legged variety in city government.