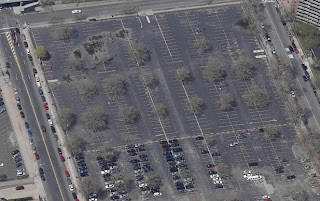 This used to be a parking lot:

City officials and developers broke ground yesterday for Rego Park Center, a large shopping and residential complex going up in the shadow of Lefrak City and several stores.

The new retail center will include Home Depot, Century 21 and a Kohl's department store as well as several smaller shops.

Yes, another Home Depot for Queens! This should keep Queens Crap even busier in the future.

The new complex, being developed by real estate giant Vornado Realty Trust, also will include a residential building with 400 apartments.

Terrific, Helen, a community room makes everything ok. Why were you at the groundbreaking, Chris?

It would have been nice if they had made this a municipal lot for the stores and the subway. But I guess Rego Park needs 1000+ more people instead.

Retail, Towers Grow In Lieu Of Wal-Mart
Posted by Queens Crapper at 6:49 AM

What the hell is going on in Queens?

That area is alredy congested. Ever try to negotiate the traffic around Sears, for example. A text book case of poor planning.

Isn't there anyone awake at the wheel?

Even more chilling, why is something this massive kept hidden (examining who is responsible for that would make a good Crappie thread) and then, like Aphodite, suddenly springing forth fully grown?

This is right outside my office window. There's no way they just broke ground on this project. I've been watching construction there for many months.

From my office in Lefrak City I can already see two Home Depots (the one in Flushing and the one on Union Turnpike). I can't imagine that we could possibly need another one. Kohl's is a total shlock store filled with crap (Queens crap?). Century 21 just duplicates all the clothing stores in the Queens Center Mall a few blocks away.

This is going to kill traffic at the corner of Junction and Horace Harding.

[I buy much of my clothes by catalogues: LLBean, Lands'End, etc. Even though it sometimes costs more, I keep my sanity avoiding the traffic at the Qveens malls and the delivery guy brings it to my door!]

Thats what happens when you let quacks like Frank Gulluscio run things. "nobody wants to see empty property" but they would certainly love a crapload of apartments and big box stores instead of more parking.

Queens is really turning into crap.

Hopefully the money generated by this mall can go into expanding the subway station.

As for making trains two cars longer- they stations are already two blocks long, with only one full-time entrance!

any renderings on how bad this is supposed to look out yet?

Big surprise! All QC commenters so far are opposed to a new development.

It's up to me, as usual, to try to give an alternative point of view.
Another Home Depot? Yes, Queens needs one that you can get to by subway. You need a car to get to all of the other Home Depots in Queens. For all of us that don't have cars, this will be a great addition.

Worried about more traffic? Take public transportation. This development is steps from the subway. There is no need to drive in that area. (Remember, driving is a privilege, not a right.)

And of course nobody mentions the many benefits that will result from this development--raising the profile of Queens, many jobs created, new higher quality housing, and increased tax revenue for the city.

This stinks like a big load of Queens Crap to me.

And just to show you that others in Queens agree with me, check out the latest post on Queens Central:

"The new mall actually represents quite the victory for community activism, as Wal-Mart haters throughout the city fought tooth and nail to prevent the developer from placing a giant Wal-Mart there. Instead, we get Home Depot, Kohl’s and Century 21, three places where I’d actually shop — being carless like many in the neighborhood, I have to go to Manhattan whenever I want to visit Home Depot, which is often."

"The new mall should really cement Rego Park as one of Queens’ biggest and best shopping destinations."

FH guy, take the IND to the 46thStreet Subway stop on Broadway (in Qveens!), walk one block, and voila, Home Depot!

I can't stop laughing at the fact that NY Zeitgeist posted that great comment which completely cuts down the point made in the statement quoted by FH Guy - before he posted it and that George bopped him from the rear. Great teamwork, guys!

Rego Park has become the "city dump" for the worst unplanned and unwanted over development nightmares!

"The new mall actually represents quite the victory for community activism"

I love the media in Queens. A party hack is called a 'community activist.'

Guys, you wouldn't know a community activist if he bit you in the ass.

Oh course, the way things are going here with Crappy, that may not be too long in the future.

Hey, FH Guy - I'm all for building, but why more malls and stores??? Do we really need another Home Depot?

How about some new schools and libraries??? Last I checked Queens is sorely lacking in quality Jr. and High Schools . . .not to mention the overcrowding. Why not forgo a Home Depot and build a nice new school or library.

FH Guy said, "Another Home Depot? Yes, Queens needs one that you can get to by subway. You need a car to get to all of the other Home Depots in Queens. For all of us that don't have cars, this will be a great addition."

FH Guy - have you been to a Home Depot lately? Most of the stuff they sell aren't little items that can be easily put into a shopping bag. Most things require you to haul it away in a car, truck or van. How would someone haul sheet rock from Home Depot via the subway?

Yes, I have been to Home Depot many times lately, at the two locations in Manhattan. There are many things you can buy in Home Depot that can be brought home on the subway. They have an entire hardware store inside Home Depot, for one thing. I've also bought blinds, paint and bathroom stuff. Not to mention that you can get things delivered and installed. If Home Depot only sold things that you needed a car to haul away, the two Manhattan locations would be out of business by now.

"They have an entire hardware store inside Home Depot, for one thing. I've also bought blinds, paint and bathroom stuff."

Why not patronize mom-and-pop neighborhood stores instead?

"Not to mention that you can get things delivered and installed."

Well then why does it need to be near a train if you can just order things online and sit home and wait for them to deliver and install them?

I agree . . . there are plenty of mom and pop places you can get items like blinds, paint, bathroom accessories - all easily accesible by public transporation. And those are the establishments that need our financial support.

Like I said earlier, I am all for building, but enough already with the shopping and housing!

We need schools, libraries, recreational centers for our seniors and our children.

We need places that will support learning, physical health and our well being . . . we need quality of life not another Home Depot.

As for public transportation, it's full of delays and crowds. When the Rego Park subway station is renovated, maybe I'll be more supporting of the mall expansion.

It's funny/sad that a place called "Rego Park" completely lacks anything parklike. How about some green space instead of another Home Depot? That would be a novel idea.

This project went through a City ULURP process. The community and the City had the final say on what the zoning could be.

As for why not build a park or a school, etc...this was private land. It's not like the City sold this to a developer.

What the area really could use a decent grocery store, a Pathmark, Whole Foods, or Stop and Shop. Something that people can get to via train. The neighborhood food shopping is atrocious.
I live in the area and traffic is already a nightmare. They need to expand the exits on subways at 63rd drive and the Woodhaven stations.

The development is going to have a 1400 parking space garage.

Century 21 is a great store and makes a fine addition to Queens. I have friends from overseas who make it a point to shop there whenever they come to New York. To the extent Queens shoppers don't need to go to Manhattan for shopping I think its great.

Wholefoods or Stop and Shop would definitely make a great addition.

I am curious about the apartments. Hopefully they raise the profile of the neighborhood.

Unless I am actually going shopping, I can bypass the traffic by Sears just by staying in the middle 3 lanes of Queens Blvd.

The middle lanes of Queens Blvd are the turn lanes for Sears and will be for this new mall, too.

This is the worst thing to have happened to Rego Park. Prior, we never had a rat problem. Now, after 2AM, it's not uncommon to see rats half the size of a cat running along the streets.

Walk down the block where Sizzler is (sorry, I'm not very good with streets at this time of the morning), and look at the roof of the back of Sears/Marshalls. You'll frequently see a hawk there, scouting for rats and mice. Don't let anyone play that off as "just a natural occurrence". Isn't it convenient that the hawk is jut now showing up as the building is being built (and is well under way)?
Please! I know my neighborhood better than I know the back of my hand, and I've never seen a hawk here prior!

I support the development since I am within 15 minutes walking distance from this location. Traffic? Just avoid it entirely, you've got the LIE and Queens Blvd at your disposal for getting around.

Does anyone know what is going on? When are they going to open?

They should have made fixing up the 63rd St subway part of the deal though. Maybe even expand it so you can enter from the new mall. Its ridiculous that you can only exit but not enter from the front of Sears.

I live right there, and I don't see the traffic problems everyone is complaining about. Sure there are cars in front of Sears, but that's cuz its a big intersection with lights. Then again, I lived in Manhattan for 30 years, so maybe my perspective of what is "congested" is different from other folks... lol.