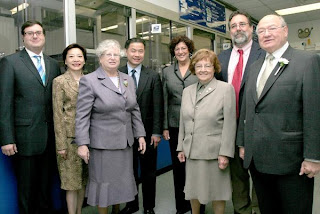 "Leonard passionately represented Flushing, New York, in the Borough of Queens during his time in the New York State assembly and senate until his untimely death in 1999. He was active in all phases of community affairs, especially in Flushing. I would like to note, Mr. Speaker, that Leonard's wife, Toby, is carrying on Leonard's work, elected in her own right as the senator from New York's 16th State senate district, succeeding Leonard after his passing. Toby is the first woman elected to the State senate from Queens County. Leonard and Toby's son, Evan, is a prominent political consultant in New York." - Rep. Gary Ackerman to Congress, 9/25/06

Photo from Queens Courier
Posted by Queens Crapper at 12:39 AM

In addition, Evan is married to the daughter of the late Assemblyman Kenneth P. Zebrowski.

Also, please note that Toby Stavisky was running unopposed in her party and in the general election. Quite a victory!

Not only is Mrs. Stavisky an example of a political dynasty, but also the lack of alternatives in Queens politics.

He had to give a plug to Evan in the speech? Disgusting.

"The Staviskys son, Evan, a Democratic district leader and influential political consultant, said his father believed in bringing people together."

Whatta crock of shit. Divide and conquer was Lenny's method. Toby's too!

Speaking of shit, Evan is a Democratic District Leader.... WHERE?

When I was in attendance at the Tom Manton Post Office-naming last fall on 61st Street in Woodside where all of Queens Democratic politicaldom attended, they gave the Manton family a plaque which says that the facility is named after Manton.(The same style plaque was given to the Staviskys.) Manton's plaque finally (months later!) hangs in the entrance BUT it doesn't tell you anything about WHO Manton was - just that it's named after (some guy) by the name of Thomas Manton. It's like a NYC Council street-naming. The same thing has happened with Stavisky. This heralded event also will pass into the "dust-bin" of history. Street signs, post office plaques? The bottom line is nobody eventually will care.

Ellen Young, are you all right? It looks like the Staviskys made a sandwich out of you!

After that, the late Leonard (son & bitch)) kept an extemely low profile!

H-m-m-m-m! Was that incident meant as a future warning to them also?

I remember that shooting. A friend of mine lives in the same building as the Stavisky's. Everyone was scared to death that afternoon. BTW, I hear she's the housekeeper from hell.

Yeah....and at the same time then police commissioner Benjamin Ward lived down the road in "Cryder House" !

What an "active" neighborhood !

Has anyone out there ever been inside the Stavisky's district office ?
None that I can ever remember !

What are they hiding in there....not to admit anyone to the "sanctuary" ????

It's been said by a former staffer....that they sure are paranoid about locking up every damn thing in the safe each night !

And when you're telephoning Leonard (or vice versa) Toby is on the extension !

At any rate, Evan is quite busy representing the following clients:

I'm new to all of this blogging, but I think its great! Who ever you are, you are providing the community with a vital and necessary service. Please, keep it going.

It's funny reading all of this and realizing that I have been a somewhat active member in the Flushing Community for over 40 years and I don't ever recall being in any of the Stavisky's offices.

I went to the Senator's office once about ten years ago to give Leaonard some papers about a complaint I had. I think the office was on Willets Point Boulevard, honestly I don't remember. I do know it is near that shopping center on Parsons Boulevard.

Anyway. As I approached, the door opened and I was met outside on the path by Marilyn Bitterman's son who took the information from me. I never got inside the door.

What a "warm" democratic machine family photo or one right out of the rogues gallery!

One thing is missing....above the photo should appear the word "WANTED"......for political abuse, selling out our communities, misrepresenting constituents, hoarding of campaign funds in golden "war chests" etc. !!!!!!

I understand.....there's an "understanding" that if your not-for-profit organization doesn't use (Evan Stavisky's) "Parkside Group" as a lobbyist for fund raising......you get "zilch" and are cut from the main funding loop!

Flushing Town Hall etc. uses them and so, I believe, does the Queens Botanical Gardens!

All of those Staviskys , come to think of it, have always look well fed!!!!!

The existence of a political dynasty .....as with the Staviskys....is patently anti-American!

Toby's a sharp old cow......she knows that their "olde" support constituency are rapidly dying off and that her days are politically numbered and that prick of a son Evan (with his "charming"social skills) could never get elected to public office!

So.....it's time for the Stavisky 'mob" to go into another business...."lobbying". It's got a longer future guarantee of employment for the "family" heirs!

What a pig pen!

Heirs? Did Evan make his momma a grandma?

If he ever comes out of his political closet.....he might !