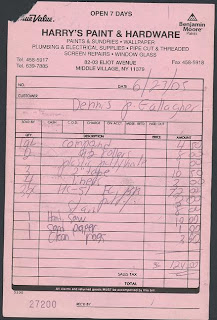 "On Monday May 21, 2007, Councilman Dennis Gallagher held a large fundraiser at Russo's on the Bay. The minimum ticket price was $100 with the entrance fee rising to a hefty $1,000. Gallagher raised thousands of dollars for his campaign coffers. Even though he has told many people he is not running for office, he still keeps feeding his campaign bank account which has grown to well over $100,000.

So why is it that Dennis Gallagher won't pay a local merchant $124.50 for items purchased in June 2005? On June 23, 2005, Kerri Steinmuller, an aide to the councilman, called Harry's Hardware to say that the councilman was purchasing paint supplies for the office. She told Harry's Hardware that she was sending a worker to pick up the materials. Dennis Gallagher's council business card was attached to the invoice.

Months went by and the bill was not paid. Both Harriet Lambros and her daughter, Christina, called Gallagher's office several times over the almost two years since but to no avail. Christina also e-mailed the councilman. Still no response.

Even Eileen Reilly from Maspeth Town Hall said she would try and get Harry's Hardware the money they were owed, yet she too was unsuccessful. This is not the first time this has happened to merchants who trusted Gallagher. But this one particularly smells since over the years Harry Lambros has donated thousands of dollars in materials for neighborhood clean-ups. The last person in the neighborhood Gallagher should cheat is Harry." - a concerned Middle Village resident

(QC finds the fact that the bill is pink to be extremely funny.)
Posted by Queens Crapper at 7:01 AM

If Harry's donates the paint supplies for the graffiti cleanups, then why does Gallagher need to keep a supply of paint on hand at the office? Something doesn't sound right.

Here's a better question...why does Dennis need putty, a handsaw and sandpaper for the office?

Sounds to me like someone's fixing up their love nest on the taxpayer's dime.

PAY THE BILL GALLAGHER YOU DEADBEAT!

Why doesn't Harry's Hardware sue him in small claims court for 2x, 3x the amount...charge the bastard interest too!

Hey maybe Dennis Gallagher can ask Mike Locasio for a loan to pay Harry. He should have plenty of cash hidden away in the wall.

Or he can ask Kenneth Rudzewick, president of Maspeth Federal Savings, who seems to be dancing for both political parties these days. He could fix it so Gallagher could refinance his home for the fifteenth time.

Or he can ask Walter Sanchez for a loan. Oh never mind, I forgot he has a bunch of federal liens against him. Mr. “I don’t have a pot to piss in” is also looking for a loan himself. Maybe Gallagher can help him out by giving him the “business man (or scam) of the year award” at his next fundraiser. Maybe Sanchez can offer Harry a full page ad to keep him off Gallagher's back.

What about Jake LaSala, oops, he has cash flow problems too. His wife found out about his antics and took him to the cleaners. Sorry LaSala's out Dennis.

Better yet, Gallagher could ask his rotund buddy and lackey, Joe Cimino for some cash. Cimino was Deputy Chief and assigned as the commanding officer of the Kings County District Attorney's Office Narcotics Division. He also was President of the Detective Investigator's Association, an affiliate of the Detective's Endowment Association of the NYPD. Wow, what credentials! He certainly could inform Mr. Gallagher that it's not nice to cheat. But of course Cimino might have come close to some cash himself while on the job.

So many possibilities. Let’s see how fast Councilman Dennis Gallagher comes up with the money to pay Harry.

Joe, the Chief Corruptor, Blowhard, and Braggart, who was probably forced to retire in 2004? Commanding Officer (ha ha)! Command this, Joe. You're nothin' but a Chief "WANNA BE" who didn't have the class nor brains to be a real cop. You were nothin' but a CIVILIAN INVESTIGATOR.
As for the Detective Investigators Assoc, he was NEVER the President of this organization. He was the president of the Police Benevolent Association of the D.A.'s Offices until 1991. He did such a poor job, he corrupted and bankrupted the union until they voted him out. Let us not forget he was a person of interest who had his union books subpoened by the US Attorney. Yup, he was hooked up in the Ron Reale (transit union President) CORRUPTION TRIAL. A half-baked politican who ran for Public Advocate. Needless to say, Reale's trial dealt with fund raising - beat this one, Pinky! Things got so bad the new board was forced to close the corporation and start a new one called the "Detective Investigators Assoc", with which he has no association.

I was looking for Eileen Reilly at the Grand ave. memorial day paraed but she was not to be found. I guess the only time she showes up is if she is being honored or paid. Gallagher you need to help this great volunteer with $$$$$$ or at least another award.

Is there an attorney out there who would like to take this case on behalf of Harry?

This guy Gallagher is a corrupt pig, impeach the bastard! Harry is one of the last of the mom and pop hardware stores. He's one of the true assets of Middle Village.

Gallagher and his gang think that thay are above the law. Vengeance is mine says the lord.

"(Cimino) did such a poor job, he corrupted and bankrupted the union until they voted him out. Let us not forget he was a person of interest who had his union books subpoened by the US Attorney."

Interesting comments on Mr. Joe Cimino. Sounds like there should be an investigation into his activities. Please give us more about this man.

It appears that Cimino fits right in to the kind of characters Gallagher has placed around him.

I've known Harry for years. His Harry's Paint once occupied the corner now occupied by the nail salon across from his present location.

I shopped at Covells before it sold to Harry and his fine family and employees. Never a complaint. Always friendly, prompt, professional, honest service.

And to now learn that his elf-sized turd has stolen goods from Harry's is the final proof that this pink-panty wearing girly boy is nothing but a cheesy thief.

We must all remember that this man is all about the money. he would sell his famely as he did his constituents for money. Taking money from builders and then siting on a city council comity to look into the D.O.B. is just one of the ways that he has sold us out. We are just goods to be bought and sold to this man. Vengeance is mine says the lord.

I shop in Harry's Paint and Hardware all of the time, and Harry is one of the nicest people who runs a store. If you cheat him he's not going to sue you because he knows that you know you're a scumbag and you know it. Gallagher is a lowlife and is only worth the carbon copy of his bill...that's a crazy price, shitty shitty.