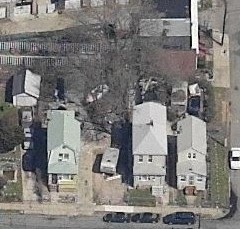 At a poorly attended meeting, the board members voted to allow a gas station to continue operating in South Jamaica.

CB 12, however, did not look kindly on an application from a Springfield Gardens landowner to a build a two-family home at 117-57 142nd Place. that would not have complied with building codes.

A lawyer speaking on behalf of the lot owner, Hamid Kavian, told the board that Kavian wanted to build a 15-foot-wide house on the 22-foot lot, meaning there would be a 3.5 foot setback on each side of the home. The zoning in the area, however, calls for 5-foot setbacks, which the lawyer said would only allow Kavian to build a 12-foot-wide home.

"It wouldn't be financially feasible to build to zoning code," the lawyer said.

Well then why did he buy it? Oh that's right, BSA will let him build whatever he wants to build. He must know that.

What in the Hell is zoning for in the first place, if BSA (the board of rubber stamps) can act as NYC's official zone busting body on behalf of anybody who wants to skirt the building law? !!!!!

Well, this is one community board that needs a little attention from borough hall.

Maybe they need to send a team over from CB1 to give 'em a workshop to refocus their attention on exactly what they were set up to do.