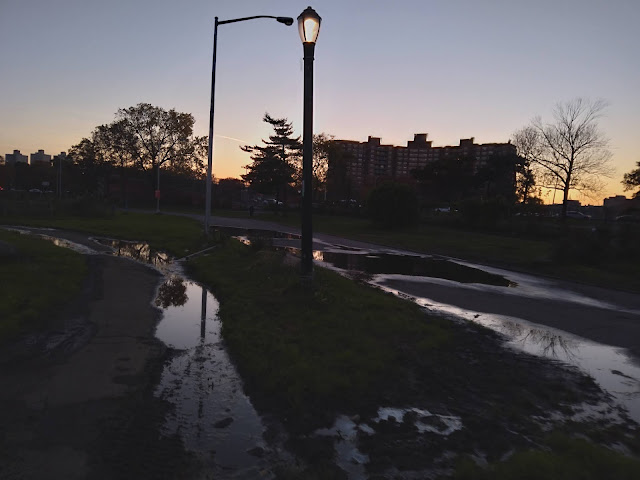 One of the Big Apple’s most popular and crime-ridden parks is routinely being left unguarded.

The city has significantly slashed the number of parks enforcement patrol officers assigned to Flushing Meadows Corona Park over the past few months – a move that left Queens’ largest park without on-duty security during large chunks of at least a dozen days the past month – including Wednesday and Thursday, some officers and their union told The Post.

“It’s shocking they won’t prioritize a park this big,” said Joe Puleo, president of Local 983 of District Council 37. “It puts everyone in danger – both the public and our members who lack the resources to enforce the law.”

Flushing Meadows has a longstanding reputation of attracting wild gatherings after 9 pm, when the park closes and the public is supposed to leave. Sometimes thousands gather near Meadow Lake, Fountain of the Planets, the officers and union said.

Some get high off booze and drugs, rev muscle cars, blast music, and urinate on the grass, they added.

In the fiscal year ending June 30, there were 35 reported crimes at Flushing Meadows, the most of any park in the borough and third to only Manhattan’s Central Park and Washington Square Park citywide, records show.

Most NYers are Democrat so they get what they asked for when they are victimized by criminals. I have no sympathy.

This is a feature, not a bug, of vibrancy. Viva la vibrancia!

urinate on the grass?
Hell they shit both on and off the benches.
The ring of benches around the Westinghouse time capsule and marker are completely covered in feces and garbage on the ground

Little Bay Park next to Fort Totten has similar problems.
All NYC Parks need to be locked up at a certain time. Drag racing idiots are making our streets unsafe.

Grass, trees and other green stuff. Pave over it with concrete and build some affordable housing.
Parks are for communists.
Prove me wrong ...

The ring of benches around the Westinghouse time capsule and marker are completely covered in feces and garbage on the ground.

Never mind waiting centuries to open this thing-open it now. The contrast between society then and now won't be any more stark.

Often the simple truths are the most powerful truths!

Is there any city law, rule, or MOU as to why the Parks Dept. needs their own police force and the NYPD can't be assigned to parks?

I find it very strange that the NYPD, with a 10.9-billion-dollar budget and 36,000 cops can't figure out how to cover the entire city without help. Maybe getting off their phones and not responding to minor jobs with 20 cops would be advantageous in that regard.

I find it very strange that some people don't Back The Blue !
It would be advantageous to prevent crimes to have more police protection not less.