C.O.'s will not comply to Blaz extortion mandate 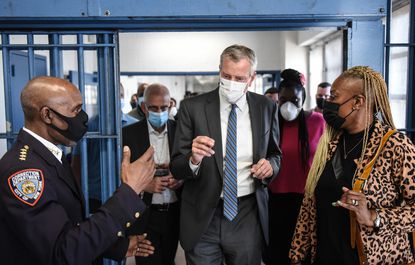 The Department of Correction’s coronavirus vaccination rate has been stagnant for more than two weeks — with nearly half of the agency’s uniformed workforce still holding off on getting their shots despite a looming mandate deadline.

City Hall data released Tuesday shows that only 63% of Correction Department staff have gotten at least one dose of the COVID-19 vaccine. That’s the same vaccination rate the department had on Oct. 31 and the lowest by far of all municipal agencies.

When only accounting for uniformed Correction Department staff — the majority of which are the correction officers tasked with guarding inmates on Rikers Island — the one-dose vaccination rate is just 57%, according to the latest data.

Mayor de Blasio’s vaccination mandate for the Correction Department is set to take effect on Dec. 1, sparking fears that thousands of the department’s roughly 8,400 uniformed staff could be suspended at a time when Rikers is already in crisis due to overcrowding, staffing shortages and violence. An unprecedented number of correction officers calling in sick to work fueled the emergency over the summer, though the number of sick-calls have recently diminished.

Benny Boscio, the president of the union representing city correction officers, said mandate-related suspensions could be a recipe for disaster.

“We still have officers working triple shifts with no meals and rest every day,” Boscio said. “To move forward with placing what little staff we do have on leave by Dec. 1 would be like pouring gasoline on a fire, which will have a catastrophic impact on the safety of our officers and the thousands of inmates in our custody.”

The FDA has asked a federal judge to make the public wait until the year 2076 to disclose all of the data and information it relied upon to license Pfizer’s vaccine.
It wants 55 years to produce this information to the public.

After most everybody is dead of course.

"The analytical sensitivity of the rRT-PCR assays contained in the CDC 2019 Novel Coronavirus (2019-nCoV) Real-Time RT-PCR Diagnostic Panel were determined in Limit of Detection studies.

Since no quantified virus isolates of the 2019-nCoV were available for CDC use at the time the test was developed and this study conducted, assays designed for detection of the 2019-nCoV RNA were tested with characterized stocks of in vitro transcribed full length RNA (N gene; GenBank accession: MN908947.2) of known titer (RNA copies/μL) spiked into a diluent consisting of a suspension of human A549 cells and viral transport medium (VTM) to mimic clinical specimen.


So based on "mimicking" a clinical specimen we have the fake tests, the fake lock down, the fake everything and now mandates.
All for the Build Back Better Great Reset crowd.
Astonishing to say the least.

After most everybody is dead of course.

———————
Where did you get this link? Conservative anti Vaxxer site right? Did you even read the whole document? Do you even understand what the document is saying?

The FDA is saying they can process 500 pages per month while also complying to medical regulations for patient records. The total requested pages by the plaintiff is around 329,000 pages which the FDA argued has massive spreadsheets.

Just as a comparison, the European Union has very strict penalties for their data protection regulation which can be as high as 10% of a company’s annual revenue. Even an honest mistake may be no excuse. You want the govt or govt agency such as the FDA to protect personal medical records or not? So you’re happy when the govt policy is the one you like but if you don’t like it, then the govt is tyrannical?

Why do people like you always hide where your source? Because you are embarrassed of the source right?

@Do you even understand what the document is saying?

@Just as a comparison, the European Union has very strict penalties for their data protection regulation

Again great gaslighting. How about publishing relevant data and not coming up with sorry ass excuses? Maybe, because FDA board and Pfizer board are pretty much the same?

The source is there, find the relevant info in the court document and check it out for yourself. This isn't CNN or MSNBC mockingbird media you are used to.

***Why do people like you always hide where your source? Because you are embarrassed of the source right?

Looks like you are a dumb mofo, get of your ass and start learning about the world you live in and have no idea about.

Internet of Bodies. Gee what are they?
Like merging your dumb ass with WiFi, Bluetooth, nano tech, synthetic DNA.

Maybe, just maybe the FDA has a lot to hide, with the poor excuse they can process 500 hundred pages a month. Takes dumb asses like you to believe this crap.

They are lying, you are shilling, but the world is waking up to let's create
human v2.0.
Once synthetic DNA is in your body your dumb ass will be patented and owned.
Will make slavery look like Sunday school.
Spare me of your labels, stupidity is no of interest to me.
Do your research, find out what is going on.
Next time you label someone anti Vaxxer, first provide the ingredients of the so called vaccine.

The FDA is saying they can process 500 pages per month while also complying to medical regulations for patient records. The total requested pages by the plaintiff is around 329,000 pages which the FDA argued has massive spreadsheets.

Maybe start reading and comprehending what you are reading.

Two months after the lawsuit was filed, the FDA has produced the first 91 pages of the “more than 329,000 pages potentially responsive to Plaintiff’s FOIA request.” The findings, taken directly from the produced documents, are cited below.

“It is estimated that approximately [REDACTED] doses of BNT162b2 were shipped worldwide from the receipt of the first temporary authorisation for emergency supply on 01 December 2020 through 28 February 2021,” the document states.

The chart lists 1223 fatal outcomes in the Relevant Cases. Interestingly, the age range with the most relevant cases was 31-50 years old, which is not the age group considered to be at high risk from Covid-19. The figure contains the addendum:

FOIA was filed by the non-partisan Public Health and Medical Professionals for Transparency.

Is the fatal adverse reactions! That's why they want 55 years to produce the documents.

Yes people, the commies are this stupid.