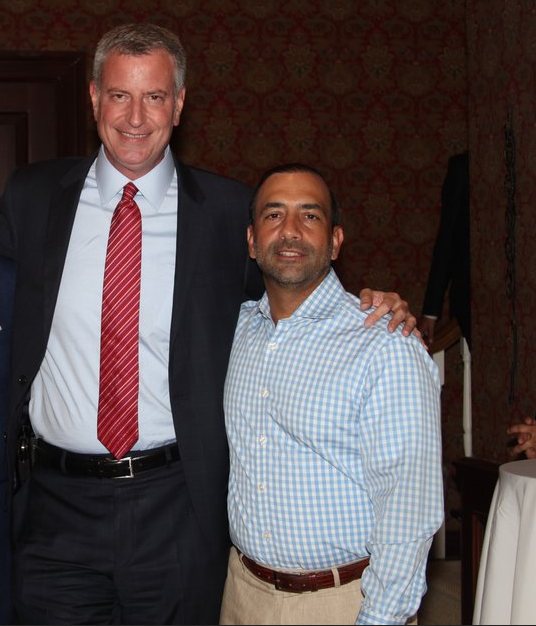 Carone is a close confidant of Adams and has deep political connections in Brooklyn. He is being considered for chief of staff, a role that would put him squarely within Adams’ City Hall inner circle, should he end up joining the administration, the sources said.

Carone heads up the Brooklyn office of Abrams Fensterman, a law firm he has built up with the help of a wide network of political and legal relationships. In addition to multiple practice areas including divorce proceedings and criminal law, the firm offers strategic advice on government relations and assists clients who have business before the city in navigating byzantine agencies.

Should he join Adams’ administration, Carone would likely need to divest from the company. And even then, the government-facing work of Abrams Fensterman would carry the potential for conflicts of interest.

“Frank Carone is a trusted friend and adviser to Mayor-elect Adams and will continue to be whether or not he is part of the new administration,” campaign adviser Evan Thies said in a statement.

Adams has been known to value loyalty, and with Carone would have a close friend at his side come January. In addition to being Adams’ personal attorney, Carone bundled petitions for his mayoral campaign and provided it with office space. The two are so close, in fact, they have spent Thanksgiving together.

They also share a strong relationship with the Brooklyn Democratic Party, whose connection to City Hall would be fortified by having Carone advising Adams from within. Carone has served as counsel to the party for roughly a decade and Adams’ campaign was backed by Party Chair Rodneyse Bichotte Hermelyn.

Chiefs of staff have varying levels of importance based on the administration and the person in the role. Earlier chiefs of staff to Mayor Bill de Blasio, for example, held far less sway than Emma Wolfe, who currently has the job and is one of the mayor’s closest advisers.

Responsibilities range from vetting ideas and proposals before they reach the mayor to keeping tabs on a wide range of agencies, according to Peter Madonia, who served as chief of staff under former Mayor Michael Bloomberg.

It's a nice gig. He could fail spectacularly and STILL not even be half as bad as Team DeBlasio.

The Train to Perdition is gonna slow down! Yeee ha! That's the best we can hope for.

The chief of staff title in politics is an interesting one; I always thought it meant that they actually managed the staff as in the private sector sense with just a different title. Until I learned that their most critical function is as a political operative/strategist and their people management skills, in certain instances, could be described as weak at best. A chief of staff really supports the elected with oversight for the work product of the staff. If they are at all competent managers they can develop talent and steer a well oiled staff machine, but that's hardly the priority in the political arena.

This new found knowledge exposed an aspect of the true underbelly of NYS politics that does not serve its staff or constituents well: It's more important that the staff admire the elected than their natural skills and abilities will fit their role. These kinds of positions (management or staff) are not opportunities for people who truly want to serve others.

Business as usual! What a surprise.

Adam’s comments after the Kenosha verdict, has already proved he not fit to lead

Kyle is innocent and the people saying the opposite probably never watch a minute of the actual trial and just read headlines. It saddens me.

Rittenhouse is seen numerous times trying to run away from his assailants in a state that didn't require a duty to retreat before using lethal force. The fact that he was running away before being knocked up the ground and having no choice but to save his own life and shoot, should have been enough for this thing to not go to trial. Classic case of good vs evil.

here come the crooks. meet the new boss, same as the old boss

More Agenda XX UN garbage coming down the pike, Smartcity for stupid people, nothing will change.
The globalists have their man, stupid people voted for him after 8 years of abuse by a deranged pot smoking communist or as they like to call themselves - progressive.

@deranged pot smoking communist or as they like to call themselves - progressive.
Trump was great for speaking truth to the ignorant.

@"@deranged pot smoking communist or as they like to call themselves - progressive."

So smoking weed if a communist pursuit now? How about beer? Or does it depend on the brand of beer. Real mericans drink Bud. Semi real mericans drink Bud Light. Communists drink craft beer?
All you right wing nuts who smoke weed better watch out. The "Right Wing Elite" is coming after you.

@All you right wing nuts

Talking to your bike?

Wrong chicom. They drink Whiskey. The stuff you cannot drink, because of your enzyme deficiency.

The "Right Wing Elite" shows a willingness to question authority, paying attention to what's going on, exercising common sense unlike the Lefturds.

"How can anyone read history and still trust politicians?" - Thomas Sowell

"The forest kept shrinking but the trees kept voting for the axe. For the axe was clever and convinced them that since his handle was wood, he was one of them" - - West Asian Fable

NYC has more deranged pot smoking communists than any other town in the USA. Eric Adams mayor of weed town.