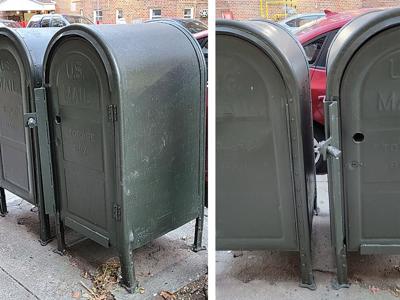 There have been a series of mail thefts in Flushing, confirmed by the United States Postal Service, with at least nine green street relay boxes “compromised.”

“Mailboxes were getting absolutely violated,” one resident said.

“We have received reports in the Flushing area, specially in 11358 ZIP code,” Donna Harris from the Postal Inspection Service, the law enforcement division of USPS, told the Chronicle Nov. 5.

Harris was unable to confirm how many boxes have been tampered with, but the resident, Frances Scanlon, said it happened 12 times between Oct. 1 and Nov. 1, as told to her by a Flushing Post Office manager.

Scanlon said she religiously checks her mail at her Beech Avenue apartment complex mailbox, between Kissena Boulevard and Bowne Street, every day. She subscribes to the USPS’s electronic delivery digest, which she said is extremely accurate in estimating when mail should arrive in her mailbox.

On Nov. 1, Scanlon was notified that she should expect three or four pieces of mail in her box, and she asked her sister to go down and pick them up. When her sister arrived, the box was empty.

Scanlon followed up with the Flushing Post Office, and was told by a manager that the relay box for her building had been compromised and two bags of mail were stolen, she said.

The manager did not respond to multiple calls for comment by the Chronicle.

In an email shared with the Chronicle, Scanlon was told by a postal employee that two others were hit that day, in addition to nine other instances in the weeks earlier.

The green relay boxes that were compromised between Oct. 1 and Nov. 1 in Downtown Flushing are located at:

• Saull Street and Blossom Avenue; and

https://nypost.com/2021/11/12/strangers-aid-woman-shoved-onto-times-square-tracks/
Asian Hate Crimes are not being reported like they should be.

Perhaps if the letter Carriers actually used the locks provided to secure the box this wouldn't be happening. In every photo in that article the barrel locks have been taped over with duct tape to prevent them from being locked... I suppose it too much trouble for the carrier to actually use the locks?

Nothing to see here. Just stealing to feed their families

Look fat, no joke. Crime is out of control. True story.

These are relay boxes used by city post offices to temporarily store mail so the carrier doesn't have to waste time making frequent trips to the PO to complete the route. Usually, mail placed in a relay box is picked up by the carrier a short time later, and mail is never stored in a relay box overnight.

Seems like an awful amount of risk for a potentially zero payoff. Messing with US mail is a Federal crime that carries the possibility of Federal prison. Stealing the tip jar at a pizzeria is probably less risky and probably has a higher payoff than a random bag of mail that may only contain bills, statements,and ads.

Makes me wonder if this is an inside job. Maybe a postal worker telling an accomplice that there's a bag containing a couple of iPhones or something equally valuable in such and such green relay box.

It's a victimless crime. Nothing to see here move along.

This is ridiculous! And I think an excuse for a failure to have locks on those boxes in the 1st place. They've been unlocked for so long---I can't remembe when I last saw a locked one, at least in Maspeth. In fact, my brother, a retired PO employee, has made many complaints to the PO over the years. So, the only new development seems to be that sleazos are finally brazen enough to steal the mail from them.

You can't eat in a restaurant without getting injected by an experimental drug with a massive number of harmful side-effects or keep your job (tyranny), but the mail just gets stolen and nobody does anything about it (anarcho).

@but the mail just gets stolen

Federal crime. Just like the fake vaccine cards. Go figure.
These people are beyond any help. You cannot fix stupid and at this level they destroying this country piece by piece.

JQ, what's the point of having moderated comments on this forum if you're just going to approve antivax bullshit?

The Legacy of DeBlasio in NYC will last for years !

@“ JQ, what's the point of having moderated comments “

To prevent people from making fun of the local right wing Karens.

"JQ, what's the point of having moderated comments on this forum if you're just going to approve antivax bullshit?"

Oh, I don't know. Free speech? But little commissars like you don't like the truth getting out. You'd have been first in line to join the Stasi and rat out your friends and family.

PS - You might want to do a wee bit of research, because what you know about the vax is nothing.

@warp10 and @"To prevent people from making fun of the local right wing Karens"
CONSTITUTIONAL WORDS LIVES MATTER ! Free Speech Pinko, ever hear about it ?

@@“ JQ, what's the point of having moderated comments “

To prevent people from making fun of the local right wing Karens.

To have little commie TA dirt bags come here and provoke and expose themselves.
They are actually funny. because they are so stupid. Like watching some bots reading some talking points over and over again.
No facts, everybody is NOT a Trump supporter, but doesn't matter.
As long as they can blast their crap they are good.

Not really. Plenty of stuff is blocked if it’s not adhering to the right wing doctrine.

Major names in the vaccine developer world are against the clot shots, because they are not vaccines! Get it?

And while we are at it, who the heck put you in charge of anything?
Just a reminder, good Adolf might of gotten away, but his suporters were caught decades later. Even the low level ones.

Actually is not a bad thing. Especially now with the prices skyrocketing.
Restaurant owners have to be innovative and cut corners, is not an easy business to be in.

So we all understand, this is what you are advocating:

Now I know who these scam robo calls are directed at. Doofii like you should be kept away from the internet fir your own protection.
Rumble.com, notonthebeeb ? Really?
Your nurse got to pull the plug.

Well if its an 'anti gene therapy shot', it must be OK then doofus?

So you say, "Major names in the vaccine developer world are against the clot shots" ?

Like who? Johnny the pharmacist down the street? Q Science Labs INC.? The Alex Jones school of science? Mike Flynn's medical mystery lab?

You also say "And while we are at it, who the heck put you in charge of anything?"

Well, who the hell put a clown like you in charge of anything? Your brain got fogged up with too much Tucker Carlson and NY Post propaganda.
Get a job and get out of that hovel you live in with your wife. I mean sister. OK, I guess she's both.

Chomping at the bits commie.

You seem to know a lot about FauxNews and incest.
No wonder, all communists are sick to their heads, you have to be to support a long ago failed socialist system.
As for you personal attacks on people here, trying to incite race, religion and other select attacks, you have not produced one shred of evidence on anything, but I have read very good articles from the links posted on this site.
You cannot debate the facts, you attack people instead.
Now why is that?


@Your nurse got to pull the plug.

But not before she explains why the selected few are not wearing a mask!

or you for that matter robo commie.

@@@Like who? Johnny the pharmacist down the street? Q Science Labs INC.? The Alex Jones school of science? Mike Flynn's medical mystery lab@@@

No wonder they are coming here, these lowlife propaganda caricatures.

Pfizer, BioNTech and Moderna are making combined profits of $65,000 every minute from their highly successful COVID-19 vaccines while the world's poorest countries remain largely unvaccinated, according to a new analysis.

Thanks for warning us of your unwanted presence.

@Thanks for warning us of your unwanted presence.

Seems he/she can thank you for your acknowledgment!

Yes, you are this stupid!