Constituents of the grave 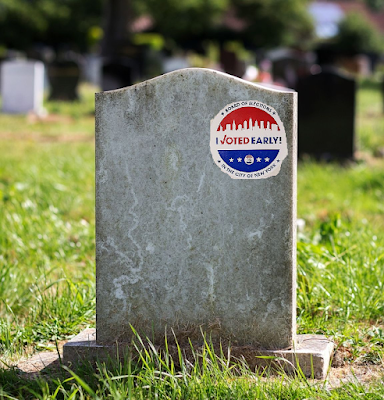 Mail-in ballots were submitted to the city Board of Elections in the name of at least two long-dead Democratic voters in southern Brooklyn — where a tight race is still going on, The Post has learned.

The legitimacy of absentee ballots has become an issue in the close City Council race in the area’s 43rd District, where Republican Brian Fox leads Democratic incumbent Justin Brannan by 255 votes, with at least 1,622 such ballots yet to be counted.

Fox’s shocking lead over Brannan — who has been campaigning to become the next powerful council speaker — appears to be part of the Republican election wave that swept out Democrats in parts of the region and nation.

Board of Elections records show that someone requested a ballot in the name of Francesca Patinella — a Democrat born in 1926 and who died March 24, 2010 — in September for November’s general election.

The city elections agency then wrote on its Absentee Ballot Tracker web portal Sept. 28, addressing the dead woman, “We have your ballot. Your valid absentee ballot was received at the BOE.”

Another mail-in ballot was submitted in the name of Yvonne Absey, who died March 2, 2012. Absey, who also was born in 1926, is recorded as requesting an absentee ballot in September, according to BOE records.

“We have received your ballot,” the BOE responded in Absey’s case Oct. 4.

A day later, the BOE declared that the Absey ballot was “invalid” because the voter was “deceased.”

Since when did the NY Post become legitimate news?

Amerika is a great country. Even the dead can vote multiple times.

Well I’m sure they’ll “find” enough votes for Brannan to win. this is Brooklyn after all

The funniest part of this article is thinking there are only two fraudulent mail-in ballots.

My grandfather never voted for a Democrat until after he died. True story.

I got a phone call from the Brannan campaign after they sent out these really insane anti Fox mailers (he's anti-vax, insurrectionist, etc). When I asked the lady who called for Brannan about them, she stammered and then said that they were, get this, sent by the owner of some sports team in Florida! Why would someone in FL even be aware of Brannan or even care? As you can imagine - more bullshit followed, with it ending with "that's why we're calling people to let them know it's not us."

"But it has Brannan's name on the flyer in the paid for part."

"Yeah but it was paid for by the guy in Florida!" (she never said his name)

"Has Brannan disavowed it on Facebook? You'd reach more people than calling them at home."

I heard more stammering as I politely hung up.

No wonder Trump Turd got elected in 2016.

Selected. Globalist Democratic Financier was selected. Over Hillary.
Stupid lunatic you are.

When are these results going to be finalized

@When are these results going to be finalized

Working on late-late-late ballots now, depends on the numbers we need.

@When are these results going to be finalized
You mean Fortified !

Amerika great country, even the dead can vote at least once.