AOC is MIA from her district offices 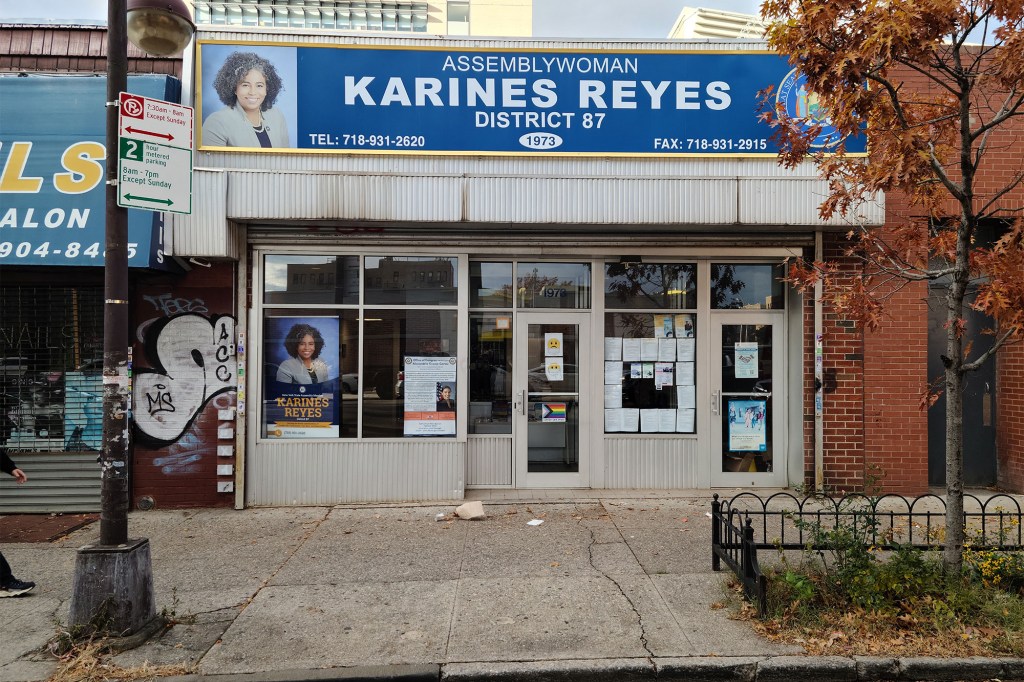 Guess this self-proclaimed woman of the people thinks they are best served from afar.

Rep. Alexandria Ocasio-Cortez’s New York City district offices are still only open for in-person constituent services on Mondays and Wednesdays — even as municipal workers and school kids have been back at their desks full time for months.

It’s a sharp contrast to the 14 New York congressional members out of 29 whose offices are open Monday through Friday — and comes after Hurricane Ida wreaked havoc on her constituents.

The storm flooded the basement of the 66-year-old retiree’s co-op and knocked out the elevators. Grubman, who’s disabled, was stuck in her home for days.

“I would like to see them here three days at least, to hear what her constituents want and need,” Grubman said of Ocasio-Cortez’s local staff.

“I don’t know what other commitments they have. Maybe they’re helping her get ready to run for Senate, helping her get on the covers of more magazines,” Grubman conjectured.

The SEER of FISH said...

Maybe she's getting boomfed by Reilly?

AOC-cups is too important to lower herself to the dirty work of serving her constituents. There are photo ops to be done! Gala events! Fund raisers! Fawning magazine profiles! That's what's high on her agenda.

When will the district realize that she doesn't give a rat's ass about them? She has used this district merely as a platform to promote herself, and to establish celebrity status. She does nothing. And yet the Quinoa-eating bike- riding , chakra-balancing vegan-beards types just love her.

She is busy now with shutting down pipelines and destroying the economy at the same time.
Anyway she has no interest in people over 40.
They are useless eaters.
Her boss, George Soros (age 91) told her so.

Lefty Marxist, Little Miss Occasionally-Coherent has been MIA since the day that she was marginally elected (she took occupancy with only 19% of her ever languishing constituency voting). Meanwhile at the Met Ball, there was plenty of time for her to cavort with the 1% and the consumptive fashion industry, neither of which is part of her stavation wages base in Elmhurst, Queens.

Another FAUX-gressive, do nothing, know nothing, social climbing, government grandstanding parasite who goes to the ball and feasts on caviar, whilst her EBT-laden constituency are living in abject SQUALOR and poverty, versus HER PRIVATE SPLENDOR (whilst collecting a government paycheck)!

It's disgraceful, dishonest, dishonorable, disloyal, and a total dereliction of public duty and public trust that DEVALUES honesty itself. It's everything that is consumately wrong with a monstrsously failed American government that models itself after Venezuela's socialist regime collapse that leaves total despair and pandemonium in its wake.

Even when she's there, she's not there...

“C’mon man, I took a shower with my daughter and asked her how old she would be if she didn’t know how old she was before we went to McDonald’s to use the internet and I farted on Camilla besides I was driving a truck with 770,000 ballots for Fulton county’s election night extraordinaire over a racist underpass with that negro Satchel and I said you ain’t black in a war zone when YOU LOST YOUR CHILD…YOU LOST YOUR CHILD, who’s on my lap and just as smart as clean, articulate white kids, I then issued a quid pro Joe to Ukraine when the smell of the child’s hair reminded me that once I get to the border my leg hairs will have dried back out and I can stop at the 7-11 using my Indian accent when I noticed a bunch of overpriced agricultural products so I bought a box of Corn Pops instead but the record player said portal bridge so I decided to take Amtrak to the train conductor’s own funeral that the Pope presided over but I tripped and it scared the shit out of me but thankfully I landed in the pool naked in front of the female secret service agent that wiped my butt and son of a bitch, they fired the prosecutor even though all men are created…you know the thing!” After hearing this story for the 100th time Psaki realized she never wants to circle back so Kamala volunteered to help NASA because she’s seen a lot of wood, of all races!

What a loser she is but the sheeple got what they voted for.

Oops, I stumbled upon a whole nest of Incels. I’m outta here…

"When will the district realize that she doesn't give a rat's ass about them?" But that has always been the situation with that district. The district was chosen for her to run for that reason.

The locals can never expect anything useful from her. Her job is to provide benefits to campaign donors: then 'developers' now 'woke madness'.

This is why real 'Civic's are not taught and the main reason that 'fresh off the boat' are welcome: they have no idea on a citizen's civic engagement responsivities or how to bridle government for their interests. This is the real danger for our Republic's future.

@What a loser she is but the sheeple got what they voted for...

Maybe. Maybe Not.
The Young Turks take credit for her, but so does 45.
45 supposedly put her in to drag Pelosi and the Ds further left to make them look even worse.

All the World's A Stage.

Flurry of endorsements getting ready for 2022 mid-terms.
Keep your eye on Sen. Leahy, President Pro Tempore, Continuity of Government (COG).

Investigate! Research! Choose carefully in 2022! Otherwise, we can end up right back from whence we came.

"Oops, I stumbled upon a whole nest of Incels. I’m outta here…"

Yeah, run boy, you stink up the place.
TA meeting is waiting for you, propaganda lesson 101 chapter 2.
Run commie, run.

Not surprised wit all those crazy traitorous right wing nuts out there.

"Young Turks" oh, you mean that fat fuck glorified gas pump jockey uigyur whateveroglu? "Şeker istiyorum" is probably that sex-harassing lover's family motto. Typical Anatolian loser - all they know is how to tear down and destroy.

@"When will the district realize that she doesn't give a rat's ass about them?"
@"But that has always been the situation with that district. The district was chosen for her to run for that reason."

In her first election cycle, AOC's INDIVIDUAL contributions mostly came from the Upper West Side. The constituents to whom you refer are not so unlike the true blue people who live on the UWS. Can you imagine contributing to someone in such droves who isn't even going to directly represent you? Because these groups are deriving their information from the same place: television.

Is it possible that one stone can hit two birds? Whoever "ran her" did their homework.

And a knowledge of Civics/Constitution is perhaps the single biggest change that must be made to curriculums country-wide. If more people had a grasp they would not have closed or worse, lost their businesses. There should also be community driven, free Civics classes once we make it through the next election cycle. How responsible would we be if we MANDATED things like that instead?

Oh, now I get it. She's a congresswoman. As in the US congress. That means she has to go to the capital. Hmmmm, let me think. Is the capital of the USA in Queens NY ?
Oh, wait, it's in Washington DC. Golly gumdrops, that explains it.

Sorry Incels, she's doing her job, and doing it quite well, in Washington DC.

@"Oops, I stumbled upon a whole nest of Incels. I’m outta here…"
Again attack attack but say nothing or produce any facts or links...

FAUX progressive Nose rings riders from TA like her and the international “Scorched Earth” socialism she promotes.

To last Anonymous who thinks that the barmaid from Westchester County is doing her job 'quite well' ...

Someone should shoot your dog and break your walking stick! There are none so blind as those who will not SEE!

(Not surprised wit all those crazy traitorous right wing nuts out there.)

Those go on your bike, commie.

@"Lefty Marxist, Little Miss Occasionally-Coherent has been MIA since the day that she was marginally elected (she took "

Hey Quotation Drone, you had no problem quoting lefties and Marxist's in a previous comments section. Make up your mind or are you totally skitzo ?

@Hey Quotation Drone, you had no problem quoting lefties and Marxist's in a previous comments section. Make up your mind or are you totally skitzo ?

Have a few words for you: shove it up yours.

To last Anonymous, a delusional, angry, triggered, empowered idiot who believes that he is owed a reply from anyone, after lampooning intelligent comments by labeling them 'Quotation Drone' and 'Agenda 21 DRONE': You're a sad little nugget; a ship in search of an iceberg who can suspend all cognitive function AT WILL.

The longer that you cloak youself in secrecy like ALL cowards, while taking capricious and arbitrary jabs at others on this thread——ironically with the administrator's blessing!——and not vilify and excoriate the filthy politicians (ALL of whom seem to remarkably pass the smell test), then the deeper that you strain all credibility. You're smellier than a truckload of empty tuna cans left in the sun! Go and hug a landmine——but blast off FIRST, YOU PSYCHO!

Hey, 'Attack And Retreat, Accuse And Evade' Drone: STOP BULLYING and HARASSING people on this thread! Apparently, the bipolar disorder of which you drunkenly accused your perceived adversaries applies to the clueless accuser himself (that would be YOU!)! Your obvious megalomania and unwavering allegiance (to the two-party-machine-failed duopoly) is not only sickening, but a testament to mental illness that, in your pathological case, is without cure.

@“ The longer that you cloak youself in secrecy like ALL cowards, while taking capricious and arbitrary jabs at others on this thread——”

Says someone hiding in secrecy.
Prove me wrong …

@"The longer that you cloak youself in secrecy like ALL cowards, while taking capricious and arbitrary jabs at others on this thread——ironically with the administrator's blessing!"