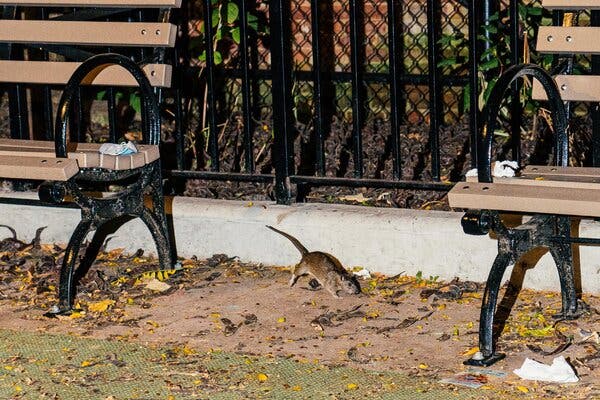 Brittany Brown and her friends were finishing an outdoor dinner in Chelsea recently when, from the corner of her eye, she thought she saw something move near the edge of their table.

Moments later, she thought she saw it again.

Then she made eye contact with a man sitting nearby, and he confirmed what worried her: A rat had been on the table. If that weren’t icky enough, one skittered through the restaurant shed as she left.

“It’s gross and it’s kind of unnerving,” said Ms. Brown, a copy editor who has lived in Manhattan for four years. She did not want to name the restaurant and single it out for what she considers a bigger issue.

“This is the worst I’ve ever seen it,” she said.

Rodents are among New York’s permanent features. But across the city, one hears the same thing: They are running amok like never before.

Through Wednesday, there had been more than 21,000 rat sightings reported to 311 this year, compared with 15,000 in the same period in 2019 (and about 12,000 in 2014). The rate of initial health inspections to uncover “active rats signs” nearly doubled in the latest fiscal year. There have also been 15 cases this year — the most since at least 2006 — of leptospirosis, which can cause serious liver and kidney damage and, in the city, typically spreads via rat urine, according to health officials. One case was fatal.

So add a plague of rats to everything else New York faces in trying to rebound from the Covid-19 pandemic. By some measures, the problem may have eased slightly before the coronavirus came. But the rodents have roared back since, thanks to a confluence of factors.

The spike is mostly in areas long known as infested, health officials insist. In one such area, Manhattan’s East Village, it was evident on a recent Friday night.

Jean O’Hearn, a lawyer, said she had never seen so many rats on her block, East Third Street between Avenues A and B, in 28 years there. As if on cue, one raced out from under a white S.U.V. about eight feet away and crossed the sidewalk.

“Oh, there they are!” exclaimed a neighbor, James Gilbert, as the rodent wiggled through a side door into a courtyard behind Ms. O’Hearn’s building. Seconds later, two more dashed from the street toward several trash bags.

Another neighbor, Maria Cortes, chimed in: “They’re everywhere — and they’re fat!” Ms. Cortes, a 45-year tenant of the building, said she jangles her keys when she approaches the front door to clear rats from her path.

Tell me the Sheeple in NYC didn't vote for this #BLUEANON ?
Or I'm a dogfaced pony soldier.

Poor Brittany, she’ll probably have to dip
Into her trust fund to pay for therapy for the trauma of seeing a rat. Seriously there needs to be a war on rats. it starts with getting rid of the sidewalk shacks and people not throwing away random shit on the sidewalks, and trash being picked up in a timely manner

Rats have been inhabitants of Chelsea for decades. Chelsea Park, between 9th and 1th Avenues and 27th to 28th Streets, has been a breeding ground for them for ages. One day I witnessed about 50 of the fuckers running as a pack across the Astroturf ball field. The homeless and the locals leave their rubbish all over the place and there are few if any trash receptacles.

They are all honored as Democ- RATS and they’re all registered to vote.

Rats are nothing new to NYC. I lived there for 40 years, they were everywhere then. What is surprising is that anyone still eats in any of the restaurants after your elected democrats allowed the sheds to exist. But please, "Wear a mask!" Hypocrisy at its best.

So don't eat outdoors. Eating indoors is perfectly safe. A plague of rats is a perfect metaphor for Democratic government, so naturally they are all over the place.

Shuddupa you face. They were here first. Don't act like you never heard of the Rat Race. You being racist.

Because the rats dominated my old neighborhood of the Northwest Bronx (yay, Bainbridge Avenue, so glad I escaped! ) my neighbors acted like rats to survive. Crack helped them achieve the needed nervous rodent like shifting of eyes and head back and forth, side to side as they monitored every smell every sound possible and their unpredictable lightening quick movements as they ran away from other crack heads they had beefs with. They took great joy in stealing or destroying anything not nailed down.

Wouldn't eat at any restaurant, period.

Wasn’t aware we had to call 311 every time we saw a rat. What about pigeons? I swore I saw one the other day uptown. Could have been a dove, but I’m pretty sure it was a pigeon.

Bring back the DSNY incinerators, there have been significant improvements in the technology to justify clean air incinerators...

But rat based environmental whacko democrat politicians would never permit that, they'd need to admit they were wrong...

DeMoRats and Rats brought to the Sheeple by the looney left !

' UNITED WE STAND, deboZio WE FALL '

You know these moderns stick rats in heir gizzard to obtain sexual pleasure and their girlfriends got little animals in their bag that pleasure them at night. And they use roaches to get the cocaine and other drugs deeper into their sinuses, closer to the brain. But what do they do if any of these vermin start chewing?

@Wasn’t aware we had to call 311 every time we saw a rat. What about pigeons?

No need Brandon. Just call your shrink to up your medication.