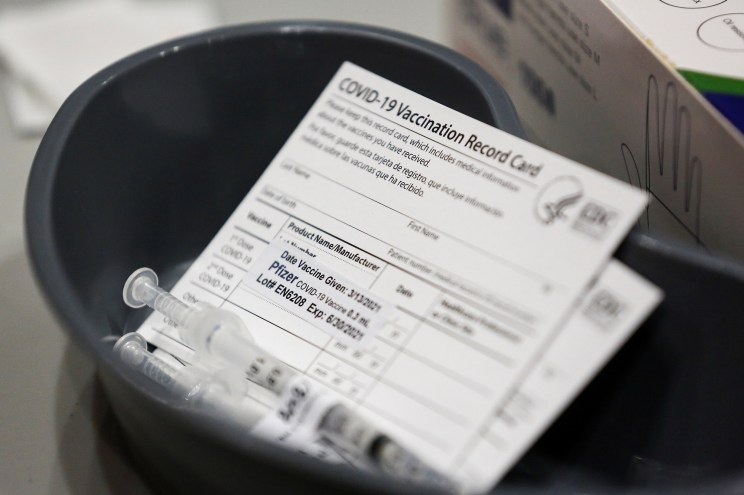 COVID-19 vaccination fraud may be spreading faster than the deadly bug itself among New York City workers, The Post has learned.

At least two city agencies, the FDNY and Sanitation Department, are in the crosshairs of a probe into employees submitting phony proof of the COVID-19 vaccine — in some cases stealing blank vax cards — in order to comply with Mayor Bill de Blasio’s jab mandate, insiders said.

At the FDNY, the scheme appears to involve the theft of the blank cards from the agency’s Brooklyn headquarters and other facilities where the department was offering jabs, according to a source.

FDNY honchos were sufficiently concerned to warn employees in an Oct. 30 memo, a copy of which was seen by The Post, that falsifying or forging an “official vaccination card” for “the purpose of proving vaccination compliance” may be a felony.

Fire Department officials have called the leaders of at least one union, Local 2507 Uniformed EMTs and Paramedics, to let them know of an investigation into members who submitted forged vaccination cards, according to the source.

“There’s a lot of people in trouble,” said an FDNY insider.

FDNY employees would have access to vaccination cards because the agency’s Incident Management Team had been dispensing the shot to workers in the department and at various city agencies.

Some of the stolen blank cards may have been illegally sold, the insider said. “There were Venmo transactions involved.”

An EMS lieutenant may have been at the center of the scheme, according to a FDNY source.

An FDNY spokesman refused to comment. Oren Barzilay, the head of the EMS union, did not return requests for comment.

The alleged fraud is widespread among sanitation workers — where at least 50 were suspended — and possibly as many as 150 involved — for providing fake vax verification, which they allegedly obtained through people affiliated with CVS drug stores on Staten Island and Brooklyn, DSNYs sources told The Post.

But the alleged fraud appeared to unravel because CVS was not distributing the Johnson & Johnson shot at the time, the insider said.

Good American citizens are completely embarrassed by this administration.

This is a huge problem especially because of the way they were caught. CVS did not give out Johnson and Johnson vaccine. I think CVS is obligated to audit their entire vaccine records to set the record strait. All those who participated should be prosecuted to the full extent that the law allows. It's a treacherous way to get your way and subject all the law abiding citizens to infection.

In paragraph four of the NYP article, FDNY said the theft of the cards "may be a felony."
"May be" and "shall be" are two entirely different horses. FDNY heroes!
Hold the line FDNY. You rally, I'll continue to be there.....

I just wish someone would specifically rally against the masks too. Like maybe the TWU???
Why are they so woke?

Too bad they didn't get away with it.

"It's a treacherous way to get your way"

Actually, taking away someone's livelihood for not getting an experimental mRNA transfection is a lot more treacherous, Karen.

"and subject all the law abiding citizens to infection"

Fact for the benighted: vaccinated people are MORE likely to spread the Rona. Look it up, Karen. Everything you think you know is wrong.

Doesn't surprise me that white trash trump supporters who support law and order are the ones breaking the law.

"It's a treacherous way to get your way and subject all the law abiding citizens to infection."

Uhhh, you can still infect others even if you get the vaccine, genius.

It's the de-regulated free market at work dummies.

@Doesn't surprise me that white trash trump supporters who support law and order are the ones breaking the law.

According to you, just plain trash communist, you know they are all supporters of Trump.
Maybe you can give us 6 winning Power Ball numbers too while you are at it.
As for being a law, kindly point to the exact paragraphs of the USC or State or City laws? Will be interesting to learn something for a change.

@It's the de-regulated free market at work dummies.

@"and subject all the law abiding citizens to infection"

Communist science at work folks. According to this nutjob, only law abiding citizen are subject to infection. Criminal commies like them are immune.

Communist pseudo conservative irish and Italian union thugs do not adhere to any american civil laws. In addition to their cop relatives and buddies they are some of the most corrupt people on the globe. Worse then african warlords.

Fraud cards are the only way to fight the communists. Keep up the fraud.

@Eliza
"Doesn't surprise me that white trash trump supporters who support law and order are the ones breaking the law."

This is not about red or blue. This is red, white AND blue.
It is about preserving the founding principle of our country: Our Freedoms, Our Free-will

Those of you who gave up your freedoms assuming you would get them back, that's a lot of trust you put into DC and local electeds.

Those of us who won't acquiesce to masks or vaccines are protecting 330 million citizens, not just ourselves.

Be sure to wear a nice thick coat this winter, so the person next to you doesn't freeze to death.

“They have engineered not only the destruction of our democracy and our civil rights, they have engineered the biggest shift of wealth in human history — $3.8 trillion from working people to these handful of billionaires, many of them from Silicon Valley,” he added. “This pandemic has impoverished the world and created 500 new billionaires.”

“Is it a coincidence that these are the same people who are censoring criticism of the government policies that are bringing them trillions of dollars? The people who are benefiting are the people who squeezing away our constitutional rights and engineering the destruction of democracy worldwide,” Robert Kennedy Jr.

Science. Here is the science:

If this is not mass murder I don't know what is.

@"Science. Here is the science:"

Don't pretend for a second that you can read and actually understand any of that. Not with your below 80 IQ and 3 years of elementary school.

@Don't pretend for a second that you can read and actually understand any of that. Not with your below 80 IQ and 3 years of elementary school.

I have read it and I understand it. Why do you speak for others communist asshole?
Doesn't fit your propaganda?
Pathetic little CCP punk.

@"and subject all the law abiding citizens to infection"

You stupid lying goyim, 6 million souls wasn't enough, you did not learn from the lessons of the Holocaust, you peddling Nazi propaganda.
Shame on you.

Censorship is the propaganda tool that is employed when the lie loses ALL of its power and control.

The Big Lie (German: große Lüge) is a gross distortion or misrepresentation of the truth, used especially as a propaganda technique. The German expression was coined by Adolf Hitler, when he dictated his 1925 book 'Mein Kampf,' to describe the use of a lie so colossal that no one would believe that someone 'could have the impudence to distort the truth so infamously.' Hitler claimed that the technique was used by Jews to blame Germany's loss in World War I on German general Erich Ludendorff, who was a prominent nationalist political leader in the Weimar Republic. According to historian Jeffrey Herf, the Nazis used the idea of the original Big Lie to turn sentiment against Jews and to justify the Holocaust.

@According to historian Jeffrey Herf, the Nazis used the idea of the original Big Lie to turn sentiment against Jews and to justify the Holocaust.


100% correct. The "invisible power" or the cult is doing the same thing today with demonizing the un-vaccinated, turning real science into fake talking points propaganda.
The gullible masses, uneducated proles have no idea about the Fabian socialists who very really capitalists and socialists at the same time.
Their function in society is to be little obedient customers and occasionally put their stamp or name on ballot, napkin whatever.
Easily controlled zombies via TV.

“ Actually, taking away someone's livelihood for not getting an experimental mRNA transfection is a lot more treacherous, Karen. ”

You’re telling me volunteers even teenage girls volunteered for the trials while you a grown man is that self deluded and believing the vaccines are experimental?

Maybe your3 too young to remember Polio killing your classmates?

mRNA technology is relatively old. The mRNA vaccine described as experimental is like saying a new car model is experimental as well.

The foundation of the concept of mRNA as a therapeutic agent was laid by Wolff J. and colleagues in 1990.

Your employer sets the rules. Now, you’re a communist and employees tell the employer what to do?

“ Uhhh, you can still infect others even if you get the vaccine, genius.”

Yes, and you do know that studies show you’re less likely to infect others once vaccinated.

Here’s an objective article regarding a study on vaccinated people’s infecting others with respect to the Delta variant:

Maybe you like risking yourself to an experimental virus that can infect humans and have mutated and we’re still finding out the side effects. We know it can attacks organs, affects the cardiovascular system, and people have lung damage, and brain fog, etc.

When people are scared of vaccines all of a sudden when most in the west have various vaccines since childhood but you get scared of the Covid vaccine for some bizarre reason?

Look at Shingles. It’s the chicken pox virus that lives in your spine and travels through your nerves. You can be afraid of the second generation vaccine but I don’t hear much from anti vaxxers about it, but a friend got an outbreak and she has partial facial paralysis because of the nerve damage. If it gets into your eyes, we’ll, you can imagine what happens.

People who have it, express sheer brutal pain from Shingles. I wonder how people accept the flu vaccine without understanding it but take it but refuse to listen to their doctors about the Covid vaccines.