The other dope from Park Slope wins comptroller seat 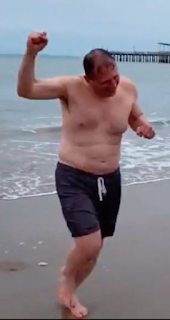 Brooklyn Councilmember Brad Lander officially secured his role as the city’s next comptroller, cruising to a a commanding 70-30 percent margin in the Nov. 2 general election against Republican long-shot candidate Daby Carreras.

At an Election Night watch party at Threes Brewing in Gowanus, Lander thanked supporters and vowed to carry out his campaign promises of fighting for a more equitable city.

“New Yorkers voted overwhelmingly for a just and equitable recovery, a thriving city that works for all neighborhoods, and one that’s more prepared for crises to come. As New York City’s next Comptroller — our budget watchdog, pension fiduciary, and chief accountability officer — I’ll fight hard every day to build that city,” Lander said in a statement.

Lander also used his speech to vow to divest city pension funds from fossil fuels, bring accountability to city agencies, and ensure COVID-19 economic aid was spent equitably in every corner of the city.

“New Yorkers in every single neighborhood can go to sleep at night knowing they’ve got a New York City that looks out for them,” he said.

Lander, 52, has represented Park Slope, Carroll Gardens, Gowanus, Cobble Hill, and parts of Kensington and Borough Park in the City Council since 2010, garnering a reputation as one of the most far-left elected officials in New York City. He ran on progressive credentials in the crowded primary race for comptroller with endorsements from Rep. Alexandria Ocasio-Cortez and the New York Times Editorial Board, trouncing other candidates who emphasized their financial expertise rather than ideological politics.

More sliding into oblivion for NYC.

New York is hopeless. The only way to drive out the Progtards is to run stealth candidates under the D banner, because NYC is chock-a-block with NPC robots who will fill in the D box even if a dead squirrel was running. NYC really is among the stupidest, most brain-washed cities on planet earth, where millions wander around without ever having had an original thought in their entire lives. It's all just Narrative consumption, an entire city of circle-jerking echo chamberists who stagger from moral panic to moral panic in a frenzy of feels and outrages. And now, no doubt, they will living up in droves to have their kids poisoned with a vaccine that have zero need for, because New Yorkers are THAT flippin' stupid.

The white ethnic base that was enough to vote in a Giulianni is long gone. It's Dems, freaks and weirdoes all the way down, other than in a few remaining districts that still have enough sack to vote for a Republican.

This commieturd will undoubtedly betray NYC retirees with continuing the insane plan of handing over $2 billion pension dollars to the brainless retard AOC to piss away on "green energy" companies. Remember Solyndra? We lost all the millions of dollars Dumbama invested in that failed "green energy"company. Remember millions going without heat this past winter in Texas? Their precious "green energy" windmills, which were supposed to power their electricity, froze up.

It’s really nice they elected a mentally challenged handicapped man to office.
Brad never got picked for a dodge ball team.
He’s the First Spazz to be Comptroller of the City of NY. Aww now I ask you very confidently, ain’t that sweet?