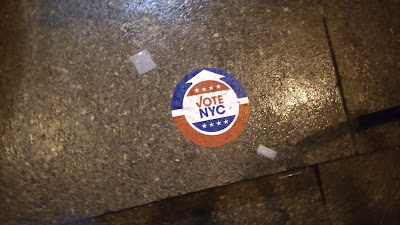 Republicans won four contested City Council races in Brooklyn, Queens and Staten Island and had a shot at taking a fifth in a potential upset.

She will succeed ex-Councilman Chaim Deutsch, who forfeited his seat earlier this year when he was convicted of tax fraud.

The district includes many Russian-speaking and Jewish immigrants in the communities of Brighton Beach, Manhattan Beach, Sheepshead Bay and Homecrest.

Vernikov ran as an unabashed supporter of former President Donald Trump, and Donald Trump Jr. endorsed her in a robocall to voters. She also opposed coronavirus vaccine mandates.

“I’m very excited. This election victory shows that the people are fed up with the progressive policies that have destroyed our city and district,” Vernikov told The Post last night.

“I hope to open the door for other Republicans and serve the district with honor and integrity.”

Ariola, the Queens Republican leader and a Howard Beach civic activist, trounced lefty Democratic progressive Felica Singh with 16,040 votes, or 67 percent, to 7,443 votes or 31 percent for Singh, who was backed by Rep. Alexandria Ocasio-Cortez (D-NY).

Carr, who was chief of staff to outgoing Councilman Steve Matteo, will succeed his boss.

Meanwhile, a Republican candidate pulled off an upset in the 19th Council District in northeastern Queens.

Vickie Paladino led former Democratic Councilman Tony Avella with 99 percent of the votes in. Paladino had the support of 12,143 votes, or 50 percent, to 10,490, or 43 percent, for Avella. John-Alexander Sakelos, running on the Conservative and Save Our City lines, received 1,729 votes or 7 percent.

and I'm sure somebody will say these candidates won because of racism. That seems to be the Democratic talking points this morning.

Vickie is an unqualified troll who doesn't even understand the role and duties of a City Councilmember. Her entire campaign was merely regurgitated OAN talking points, which have no meaning at the municipal level and no substance on how she intends to address community issues. Her inexperience, lack of connections and confrontational personality leave us with someone who has nothing to leverage resources into our district during budget negotiations.

Expect a decline in quality of life beyond what you thought you were experiencing.

Will Vickie Paladino's lead hold up after absentee ballots are counted? Anyone know how many absentees there were in CD19?

It is a great day for the Republic.
Moderate Democrats and Independents are starting to wake up.
Let's go Brandon

"IF YOU NEVER BEEN ARRESTED BY KAMALA HARRIS, YOU AIN'T BLACK" JOE BIDEN 2021

I really hope Sleepy Hiden doesn't get impeached. Every day he's in office, more people flip and will vote for a conservative.

I'm a registered Democrat in Malba and voted straight ticket Republican. I'm sure I'm not the only one.

According to the Queens Chronicle: "Just over 2,208 absentee ballots were returned on Election Day, the city Board of Elections reported, which is less than half the number that had been distributed. Only 336 of those ballots were registered to Republicans and just 17 to Conservatives. Democrats submitted 1,610 absentee ballots."

Avella has the potential to pick up a lot of absentee votes when they're counted next week. Let's see if Paladino's lead holds up. It might be a real close one.

Atlanta Braves also won the World Series last night. You know, the team that leftists boycotted earlier this year. What a glorious week this is turning out to be.

"and I'm sure somebody will say these candidates won because of racism."

Lol, yeah. But when a Julie Won wins partly due to massive ethnic voting, it's not racism. When blacks vote 95% for the black candidate, not racism. When Arabs vote for an Arab, not racism. Only whites aren't allowed to support their own race. I wonder where that idea came from?

It is a great day for the Republic.
Moderate Democrats and Independents are starting to wake up.
Let's go Brandon

A moderate Democrat? What's that????

Anonymous said...
I really hope Sleepy Hiden doesn't get impeached. Every day he's in office, more people flip and will vote for a conservative.

Don't worry-he won't. For that you need an opposition party and the Banana Republican party sure as hell isn't one.

Anonymous said...
Atlanta Braves also won the World Series last night. You know, the team that leftists boycotted earlier this year. What a glorious week this is turning out to be.

As a Democrat, I also voted only for Republican or Conservative candidates, and I've never done that before. It's gotten that bad. Good riddance to DeBlasio and gang

What are you? A communist?
No more Reds !

Why is it the "World Series" when hardly anyone outside of USA plays this boring game. It's probably suitable for people down south who can spend a whole day watching paint dry.

@It is a great day for the Republic.

Not really. Glenn Youngkin CEO of the Carlyle Group until June 2020 is the Governor of Virginia now. Plenty of pictures of him at the WEF.
Globalist to say the least...

"You know what it means to be WOKE? It means you're a loser."
PRESIDENT TRUMP.

Rush Limbaugh said years ago that these "Left" woke people must be defeated. They cannot be reasoned with. Let's go Brandon

The dems made their bed, now they have to lay in it.

What are you? A communist?

No, you are the Communist a flaming stupid one.

On the surface Youngkin looks shaky, but consider the following:

*His campaign was pretty shrewd and he sounds smart. I think he really wanted to win and therefore, he got some good (Bannon-type) strategic advice;
*Someone I know who worked for Big Pharma gained a lot of knowledge about creativity from the experience which they now use for good; and
*Youngkin is a Virginian through and through.

Worth keeping an eye on him; he may surprise you.

And Fuck Donald Trump too.

All the Dems have is the race card.
They are using the tactic of accusing the enemy of that which they are guilty - dog whistling is apparently what they constantly do!
Remember when KLAN DNC Virginia mayor Ralph Northam wore blackface?
Pepperidge farm remembers


@And Fuck Donald Trump too.

Not even with your dick.

James Carville has a word for you TA commie woke nutjob. Better listen.

@@On the surface Youngkin looks shaky,

Is not the surface, these are facts.
We know what Carlyle Group is about.
We also know what WEF is about with "cis" "chip them" Klaus the Pig, Kissinger's star student.
Reason for concern.

After what the Democrat party did to Brett Kavanagh, I will NEVER vote Dem again, and this from a former NYC voting delegate.

You Winsome, you lose some.
Let's Go Brandon