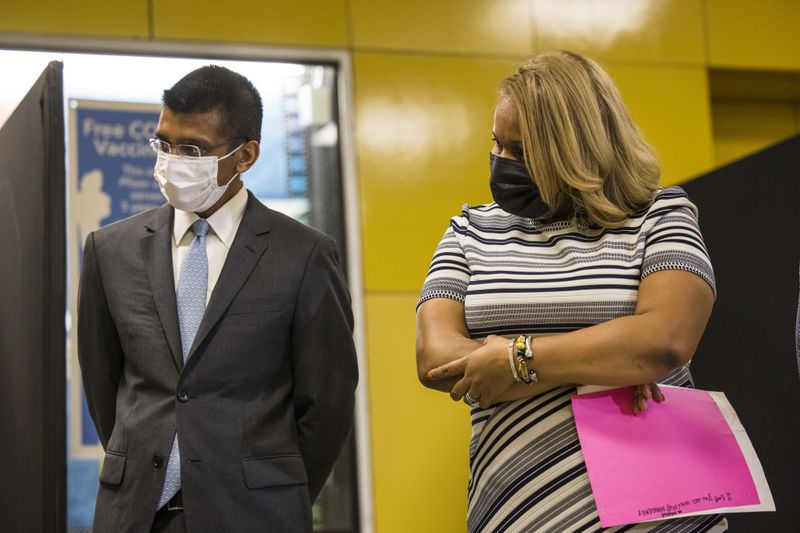 A city effort to vaccinate newly eligible kids ages 5 to 11 against coronavirus kicked off Monday morning at school clinics — but ran into some early hiccups.

Anxious parents spent hours waiting outside some schools in the hopes of securing a vaccine dose for their elementary-age kids, only to be told the clinic didn’t have enough supply.

Parents at Public School 8 in Brooklyn Heights began lining up at 6 am for the city-run school vaccine distribution, with the line swelling to more than 100 people, one parent said. But city workers running the clinic said they could only give out 50 shots because they needed to conserve doses for other schools they were visiting Monday, according to parents at the school.

“I just don’t understand why they would have taken this approach,” said Michele Walsh, the parent of a first-grader and a fifth-grader, who was turned away after waiting for more than an hour.

Walsh said she refrained from looking for other appointments for her kids because she was counting on getting them vaccinated at the school.

She added that PS 8 administrators even gave city officials a heads-up in advance that there was going to be a huge demand for the shots Monday morning.

Walsh was even more frustrated that her kids had to miss the start of school while waiting outside in vain for a COVID-19 vaccine. “If they had just given us numbers and told us how many they had, the kids could’ve been in school instead of waiting outside,” she said.

A parent at PS 40 in Manhattan reported a similar supply problem, and said the shipment of shots still hadn’t shown up by 10:45 am — nearly four hours after the distribution was supposed to start.

How brain dead do you have to be to get your kid vaxed? It's the same NPC Karens whose children have been suffering for two years wearing masks that (1) DON'T DO ANYTHING to stop a virus spread in the air and (2) KIDS ARE AT ZERO RISK anyway.

But these idiots, hypnotized by media and Twitter lies and fear-mongers (lookin' at YOU, Eric Dingle Dongle or whatever your name is), will line their kids up to get a vaccine that is exponentially more risky for their kids than the virus is. You can't fix stupid, and you ESPECIALLY can't fix virtue-signalling stupid.

Stuff you will see a lot of in the comings months. 1. Mother posts triumphant photo of kids getting vaxed on social media. 2. Mother posts pictures of kids in hospital due to vax reaction.

"Parents at Public School 8 in Brooklyn Heights began lining up at 6 am for the city-run school vaccine distribution, with the line swelling to more than 100 people"

Lol! Moronic white and Asian Biden voters, every single one of them. They will never, EVER learn.

The risk of the "vaccine" is greater to the kids than COVID.

Lord, everything in this administration is incompetent or crooked.

@"NPC_translator"
The only Karen's around here are yourself and the usual Right Wing nuts who show up spreading misinformation.

"The only Karen's around here are yourself and the usual Right Wing nuts who show up spreading misinformation."

Lol! I'm sure you get your information from reliable propagandists, uhhh, I mean reliable sources like CNN and Rachel Maddow, or whatever various government or Big Pharma cut-outs are shilling on The View.

So why have multiple European countries now banned vaxing for young people? I guess they're all "right wing nuts" over there. Well, here is a gob load of data for you, though I know this is a waste of time as you have no interest in learning anything.

Oh yes, Covid is SUCH A RISK to children!!

in 19 months, there have been 439 pediatric deaths from covid in the US. this is 72% lower than the number who have drowned in the same timeframe (and less than half of pneumonia). it annualizes to a 277/year rate.

note that this is lower even than (the incredibly rare) flu deaths count in this demographic.

@The only Karen's around here are yourself and the usual Right Wing nuts who show up spreading misinformation.


Oh please, you communist freak, scientists of world fame don't agree with this scam, which is unfolding as we speak.
You need to be put in a mental facility and heavily medicated.

The vaccine (bioweapon)ingredients are trade secrets, so no one knows what the ingredients are. So much for informed consent.
The big pharma companies have very strict contracts with the countries of the world.
Liability shield protection, nothing happens to big pharma if the shots cause illness, death.


You have to be the dumbest motherfucker alive to get the shot.

Those are your friends too. So is Adolf.
The rest of the world hates "isms" whereas you love it.
Communist freak.

Like Johnson & Johnson? What are they now? Like 3 companies?
One to deal with the cancer lawsuit (bankruptcy), one for beauty care products (they will stay in business) and one for the "vaccine" scam (will be sued into bankruptcy).

Fascist = Means government is in bed with big business, best example Benito Mussolini.
And your life today under the Brandon regime.

@"The rest of the world hates "isms" whereas you love it."
I presume you hate Capitalism too you commie doofus.