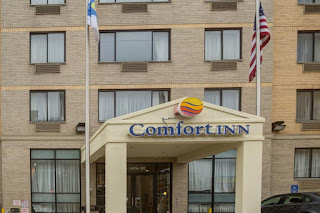 
Six new hotels sprouting up in the industrial portion of Sunset Park are just wolves in sheep’s clothing that will end up housing homeless people instead of tourists, claims a community activist who fears the surge in hotel construction in the neighborhood is a thinly veiled attempt to shoehorn more shelters into the area.

“These are not hotels. I don’t care what they say, they’re going to be used as shelters,” said Delvis Valdes, a director with activist group the Village of Sunset Park. “It’s no coincidence that Sunset Park is suddenly the hottest neighborhood to visit — it’s not. There aren’t enough tourists to fill these hotels so the homeless do.”

Sunset Park only has one official homeless shelter — a controversial home for single men on 49th Street between Second and Third avenues — but the city’s Department of Homeless Services is renting rooms in at least five new area inns without alerting locals, according to Community Board 7 district manager Jeremy Laufer. And this paper recently discovered that the city quietly converted all 77-rooms of a Comfort Inn on 38th Street near Fourth Avenue into a shelter.

Now developers aim to build at least six new inns in sections of Sunset Park and Green-Wood Heights and residents assume they too will be claimed by the city and transformed into shelters.

Meanwhile, City Limits has the Coalition for the Homeless acting like it's ok that NYC is burdened with LI and NJ homeless:


Just over 11 percent of the people who moved in to DHS shelters in the final six months of 2016 did so from out of state, according to the agency’s latest statistics.

On the other hand, the Coalition’s website cites as a myth the view that “out-of-towners abusing the city’s right to shelter” caused the crisis. Many families categorized as non-City residents in fact lost housing on Long Island or in New Jersey and returned home to New York.


Guess what? If you're entering a NYC shelter from LI or NJ, then you're an "out-of-towner".

And finally, according to the RFP posted on the City Record, Staten Island will escape having to shelter the homeless in their hotels:


Under Master Contracts, during the commercial hotel phase out, DHS would pay vendor(s) to procure reservations at current commercial hotel in Brooklyn, Queens, Manhattan, and the Bronx, manage this emergency portfolio and address the need for emergency placements as such need may arise, and provide social services to residents at the facility and all costs associated with managing their portfolio(s).

Posted by Queens Crapper at 5:33 AM

Naturally!
It's easier to bamboozle a hotel into a nabe without major opposition.
Once on, if not occupied to capacity, the homeless are ushered in, often in the middle of the night.
Bingo! Once the homeless are in, it's a done deal for your area. Crime goes up. Mentally ill....that's what many homeless are, wandering the streets.
Also crime might go up!
Instead of adequately providing for these unfortunate souls, NYC opts to dump the visual blight....as they see if...into outer neighborhoods and away from the tourist corridors.
Can't have those nasty dirty folks spoiling some well off tourists visit to the big apple.
NYC has taken a theme park approach to running the city.
Was it 9 million tourists that visited NYC last year?
That's our only industry besides real estate.
We make nothing, no more! We market our real estate and promote our old image , much of which no longer exists, outside the major attractions like Radio City, Statue of Liberty, etc.
Come spend your dollars here. Take no notice of the homeless sleeping under cardboard shelters.

EVERYONE only comes here to go in welfare. We are a pathetic city who gives away welfare left and right. You should see how much medicaid claims I process everyday through the hospital I work in. Everyone is on medicaid of some sort. We hand medicaid and welfare out like it's candy. The homeless system is the same thing. The ones who work in this city are the dummies. We go to work, BARELY scrap by paying our rents and commuting costs, while the rest of the population just sits at home or in one of these hotel turned homeless persons apartmentry and collects our tax dollars and not pay a dime in rent. It's a wonderful system we have here if you're not working.

Just look at hotels that are being built in areas that do not have Public Transportation or are not near an Airport or tourist venue and within a year after its opening it will be a HOMELESS SHELTER.......

Hotels will become shelters it is a given.
City will want a private contractor to take over so if problems arise who do they blame?
How about vetting these people and see which one have families and send them on their way.
One guy in a recent article states he is working on getting a transfer to where his family is.
Living here in NYC is expensive for me. Looking to get a second job even after cutting back expenses. Eventually will have to relocate if things keep going this way.
So people this is the affordable housing the mayor spoke about hotels for homeless while taxpayers foot the bill. They put them in inconvenient places with no transportation or stores.

Because the readers of Queenscrap should always be educated a cut above the rest, you should all be aware that Coalition for the Homeless receives revenue from public support in excess of 50% of their total assets.

They are undeniably a player, even if not a financially large one, in the homeless industrial complex, and have vested self-interest in making the problem worse. We already have a Department of Homeless Services. There is zero reason why this "non-profit" should be getting millions in direct funding, and then some.