They'd hold a ribbon cutting for a flea market 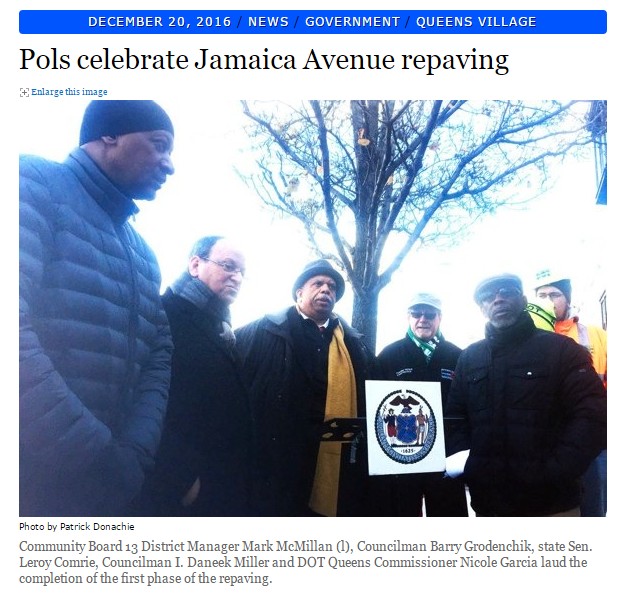 Only in Queens do politicians hold press conferences - podium and all - to announce that basic road repairs have been completed. A press statement would have sufficed.

From the Times Ledger
Posted by Queens Crapper at 6:37 AM

Politicians have nothing to do anyway. Heck, they don't even return calls or emails! Well, ok, maybe once every four years.

Lol...when they repave all of Jamaica and fix the cross Bronx expressway, I WILL BE at that ceremony!

Still more of Jamaica left to be done. Also try getting to flushing too sometimes especially by citifield.

This is Jamaica....one of the worst nabes in Queens.
Look at who is representing it!
The y have spent millions over the years to see a micron of improvement.
There will be no improvement until the population itself is improved.
Shit is shit and crap is crap.
No use pretending it's Godiva chocolate.

Can we get transcripts of the speeches at this monumental occasion.

The pearls of wisdom must be priceless...

I thought Comrie was going on a diet. My grandfather used to say beware of obese politicians, they eat our taxes.

Now come to Liberty Avenue, if you can navigate around the massive cracks, craters and the double and triple parking.

I thought Comrie was going on a diet.

A scarf big enough to fit around Comrie's neck is also known as a parachute.

I think this is a valid point - every event in Queens that has any significance, no matter how trivial, MUST have the imprimatur of a politician or, by extension, it is not important.

Look at the weeklies, starting with the front pages. All feature the wisdom and benevolence of our great and all knowing leadership.

This encourages the childlike dependency on them.

If they are not involved, any idea, no matter how worthy it might be, is subject to ridicule and disdain if it lacks their approval.

By the same extension, any idea, not matter how stupid and hurtful to a community, is fine as long as our great White Fathers gives it their raised hand in approval and blessing.

If this borough ever has any hope of digging ourselves out of this hole, we have to start acting like adults around these children.

We call the shots, not they. Try it. Its sooooo easy.

And as the press conference was wrapping up every utility company in a 10 mile radius rushed in and began cutting the road open to ensure that it returns to complete shit.

I MEAN REALLY, DO THE ASSHOLE GHETTO JAMAICA ELECTED OFFICIALS REALLY NEED TO HOLD A PRESS CONFERENCE FOR DOT PAVING JAMAICA AVENUE - IT IS THEIR FUCKING JOB.

What a bunch of ghetto ass black gangster Jamaica politicians. I mean why the fuck does this need a press conference. Christ the bar is so fucking low in this community.

ASSHOLES. Try to rise up at least a notch from the ghetto basement.

And of course the biggest fucking waste of flesh, Leroy Comrie, is a the head of this foolishness.

Fuck, what more can I say, fucking total imbeciles BUT on our fucking dime.

Alas, our fed up and disgusted citizenry have got to FINALLY resign themselves to believe that ALL politicians (not public servants), are ONLY there for the publicly unauthorized, taxpayer-funded, automatic cost of living adjustment paychecks, and lifetime pensions (that ironically were always designated for their ever languishing constituents, all of whom were left to rot in perpetual PUBLIC SQUALOR, beggary, obscurity and quiet desperation, versus PRIVATE SPLENDOR, privilege, power and unjust enrichment for themselves).

Hence, New York State's 300% false, fake and failed politicians (from the top of Albany's darkest corridors, right down to the bottom of City Hall's kakistocracy), are now the worst of the lot, to unprecedented effect!

But, guess who makes the world a better place? Scientists, engineers, architects, artists, teachers, sculptors, etc. In simpler parlance, people who actually work for a living; not just cradle-to-grave, city and state government parasites like these hobbled hustlers who just show up (selectively and occasionally, exactly how they represent their subjects), and without redeeming themselves, as they take ALL of the credit for NONE of the work.

So, either wake up from your sleepwalk, 'SHEEPLE,' or start challenging authority that doesn't deliver——and never has!

Now, it may be new year 2017 approaching, but in THIS politically ravaged and tonsured State of New York, it's a story-on-loop about: SAME CIRCUS——SAME CRADLE-TO-GRAVE GOVERNMENT CLOWNS (who ironically keep winning reelection, without ever bothering to work for a living)!

There is nothing happy about THIS new year, when it will just be a tired retread of the last year (and so on, and so on)!

Kind of like Avella who does a PC and then never follows up with results. Nothing new here.

Still waiting after 25 years for the city to pave my block over here in Maspeth. That needs a ribbon cutting at least but once they get around to it only then will they dig it up for some project.
Story of life here in the city. Nothing lasts for long here.

>Also try getting to flushing too sometimes especially by citifield.

The City has been purposely leaving that area unrepaired so they can make a false case that it's run down and sell it off to build a huge shopping mall.

All those small businesses in the area? Who needs em? They don't contribute tens of thousands of dollars to the Mayor.

They HAVE held ribbon cuttings for a flea market!

Kind of like Avella who does a PC and then never follows up with results. Nothing new here.

You mean like the downzoning of Broadway-Flushing that then-Councilmember Avella was able to get? Wonder if that comment was from a Vallone troll or a de Blasio troll...

Anon No. 17: Could be; could be someone from REBNY.

That well fed, fat cat Comrie, looks like the plump Yeed politico that he is.

I meant TWEED not "Yeed". I hate my spell check program taking over.

>I meant TWEED not "Yeed". I hate my spell check program taking over.

Why the heck is "Yeed" in your spellchecker? It's not even a word.

The worst of this s Urey lot is Barry Grodenchick....perennial hack.....lackluster...in lock step with Boro hall's agenda......
BUILD BUILD BUILD OVERBUILD!
That puts money in the campaign coffers of the untalented liberal asshole politicians of Queens.
If it were not for political careers WTF would these gassy sphincters do for a living?

To last Anonymous: Grodenchick belongs in jail, along with the REST of Borough Hall (and the sycophants who empower these publicly failed servants), because they represent the most toxic, intensely incompetent administration of them all, and now one that is starting to make Donald Manes (and his favorite, walking corpse of a 'Drag King,' Claire Schulman) look like honest, ethical leadership that leads by example. How scary is THAT?