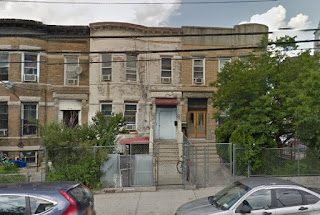 A Woodside property owner whose two-story building was deemed too hazardous for living was arrested this week for trying to bribe the city into overlooking the vacate order.

Susana Escobar-Cardena, 65, was charged on Dec. 12 and charged with third-degree bribery and second-degree reckless endangerment. Escobar-Cardena, the owner of a two-family home at 62-17 39th Ave., had illegal single room occupancies in the cellar and first and second floors of the building.

Escobar-Cardena told the investigator that she had nowhere else to go and was told that the American Red Cross could help her find a new home. She proceeded to place $200 in cash into the investigators hand. The investigator told her it was not appropriate and told his colleague who was outside, according to the criminal complaint.

The investigator and his colleague went back into the building to record the conversation with Escobar-Cardena who again tried giving the DOB employees $200.
Posted by Queens Crapper at 6:50 AM

At least someone is trying to fix the housing shortage and homeless problems.

And the powers that be arrest him...

It's startling, not the bribe business, but that there was an arrest made. I Guess the inspector was insulted by the paltry amount offered...

This and that recent bust in Bensonhurst is showing that the current investigations against the Mayor and the DOB are feeling the heat.

But like the war on drugs, they only go after the users and not the dealers and the lords.

He went back outside to get his partner and get him in on the deal....

No one cant live there and she cant re rent is sorta harsh. Someone is trying to get their hands on the property, $1.2 million all day on that building!

Surprised that the dob actually did their job. What about the rest of the work they should focus on? Like all of the illegal conversions in bayside and flushing?

The tragedy here is that it took DOB 9 months to follow up on the vacate order & the owner does not have the wherwith all to crash out & sell the property.

Seems unfair that he got arrested for business as usual. He must have not offered enough money.

So if she's looking to make $1.2M on that property, how is it that she can't find another place to live?

Hang 'em all by their balls in the town square!

Yeah NEVER offer an inspector $200, they get real pissed Quote: what the hell is wrong with you' Do you expect me to risk my job, benefits and pension for $200. I have kids going to college.

Around Queens the going rate is around $1500 per issue and you don't hand it. You ask the inspector and if you get the gripe (above) you drop an open bank envelope on the floor then excuse yourself to the bathroom.
Stupid people !! The poor woman is likely going senile because $200 was 1968 payola packages.
That inspector likely thought he was being setup or watched and tipped off.
A lot of heat is coming down on this mayor, 311 and the DOB. Even more heat if Trump is swarm in and goes after the illegals and slumlords that employ and house them.

I agree with most of the posters.

This is only news because of the LOW amount of the bribe. A four figure bribe would have been business as usual and no further inspections.

that place has been an unsightly dump for years. Always lots of garbage outside really filthy.

the only problem is that $200 as a bribe is disrespectful. what a cheapskate.

didn't the landlord know that the code for bribing City Workers is to say -what do you want for Christmas?


don't cry for too long because all the illegal aliens in the illegal boarding house will be handed housing subsidy vouchers with out having to go through any back ground check or wait for years on a list.

Agreed!
At least a grand must be offered a DOB inspector, otherwise he rats you out.

Window dressing on the cheap for the DOB. the real grafters are wetting their pants laughing all the way to the bank. Must be a newbie who hasn't been broken in yet by the old timers who called this.

Knowing the proper talk and CODE of conduct for is a must
Dont people know this ? I'm laughing, what funny post $200 Haa Haa !!

Something is very strange about the city actually giving a crap about illegal room rentals in this area. Woodside Ave (at least from 70th thru the 90th Streets) is plastered with Se Renta Cuarta handwritten ads at all times. It drives me crazy that they do not investigate these ads. Every few weeks, Time Warner/Spectrum sends a batch of at least 10 ads addressed to my domicile (a very small, one family house with one front door, one back door). The ads are addressed to "First Floor Resident 1, First Floor Res 2, 3, ...Second Floor Resident 1, 2, 3, 4....Basement Resident 1, 2, etc... " Clearly everyone knows what the local housing situation is. Is the city actually starting to be concerned with illegal conversions and the dangers they entail??