Flushing may get a movie theater 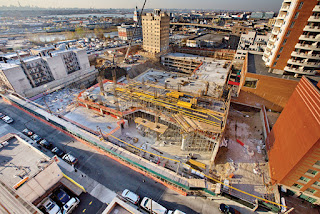 A new development in Downtown Flushing at 133-15 39th Ave. will include a movie theater as part of its retail section, marking the first time in 30 years that Flushing will have a movie theater, reports say.

The mixed-used project, called Tangram, is being led by development companies F&T Group and SCG America. Construction is under way at the site, which will include 1.2 million square feet of office, residential and hotel space, including a 225,000-square-foot, two-story retail podium, the development companies announced on Dec. 1. The movie theater would be a part of this retail space.

The theater is anticipated to be 34,000 square feet with six to eight screens and seating for 500 to 800, according to a report from Commercial Observer. It will be the first movie theater in Flushing since the historic RKO Keith’s theater closed down in 1986.

Commercial Observer also reported that SCG Retail, the company handling the retail aspect of the project, is looking into an “experiential” theater that could include luxury dining.
Posted by Queens Crapper at 6:46 AM

....as the Loews sits abandoned and crumbling for the last 30 years.

The fact that you say Flushing hasn't had a movie theater for 30 years is just simply untrue. How can you forget the UA Quartet on 160th and Northern Blvd. I saw many many movies there as a kid and young adult. Of course that was before Flushing turned into west Korea, Damn I miss the old days.

Queens needs more entertainment options. A bowling alley would be great. Something along the lines of 'Lucky Strike' but much more affordable. Heck, they should build the Queens version of Chelsea Piers in Willets Point instead of cheap condo's.

You cant go to the movies anymore its cost over $20 a person and for what ? I recently had some "comps" for "Capt Scully". Small seats, small screens, today's young people are total assholes. A shitty $20 movie could land you in a fight, possibly arrested. It personally happened to me years ago with some young punks shooting spitballs into my girlfriends hair. (it called assault II -yet the cops wanted to arrest me)
Most today's movies are all crap anyway, scores made in Canada on the cheap with inexperienced people.
Yeah pay $22 to see Suicide Squad or some other over promoted corporate piece of crap with sex, people getting killed or multicultural garbage made in Vancouver BC. Anything to keep your attention because the writing, scripting and directing is so weak and disorganized.
Come out the theater to find your car vandalized or stolen.
--fun times in Flushing ?

Honestly, The last movie I actually paid to see was Mel Brooks "Spaceballs" at the Great Neck Squire theater, it ended with an attendant calling the cops.

Maybe its you Joe.

"Maybe its you Joe"

When some punk punk brat shoots spitballs (could have aids, TB or Hep C) he's messing with the wrong guy.
To add: When a venue lets assholes or drunk punks out of their mind on "Molly" or something continue starting trouble inside a dark theater and security non existent, useless, afraid to do anything GAME ON.
Inside a dark theater with no place to retreat first (as NYS castle doctrine requires) One has the right to defend if necessary when the cops aren't around. In the end the cops saw it as that way as well. (thanks to several witnesses was slam dunk and the other guy was read his rights in the ambulance)

"UA Quartet on 160th and Northern Blvd"
Had good times there and could walk to and from the movie and most of the costumers were residents of a once great neighborhood now turned into "Queens Crap" !

Id say MORE then a GREAT neighborhood.
People took pride in the homes they owned. You could do things, places to go at night and ALL local.
I was in the house band at POETS, was a great "Jack in the Box" that had "Super Taco's" 99 cents or was it $1.19 or something ?
Shamus Pub and another great place on the corner by the LIRR cossing

This is pure baloney to placate the residents.
Everybody knows that movie theaters are closing all over the city , except a few art houses and select screens.
Tickets are too expensive and everybody is streaming their entertainment.

This is not Manhattan. This is Flushing.

To bring up an old topic, the RKO Keith's...
WAZUP? Now, there was a fine theater! We hear that 60 million dollars is the next flip,price for the property.
Since Tommy Huang first purchased the Keith's for 3.4 million dollars in 1986, this site has been flip flopped like a griddle cake.

Has any money been laundered each time there is a sale?
Many have asked this question.

And where is the elusive Peter Koo?
Doing as little as possible, except supporting his developer pals, while they support his political campaigns.

What are they going to show , Chinese films?
Nobody will attend if the parking lot is gone.
Imagine paying about $100+ for tickets, food and parking for a family to see a movie they can download on their 50" screens at home?
You gotta be kidding!
Loew's will not open up any theaters in an immigrant neighborhood.

Unfortunately, at this point, the Keith's is beyond restoration (except it's landmarked ticket lobby and grand foyer).
It might take well over $100,000,000 to rebuild this once magnificent movie palace to its original splendor.
The lesser ravaged Loew's Kings in Brooklyn's, renovation price take wax about $95,000,000,
How many tickets must be sold to amortized the investment?
Sadly....case closed! Restore the landmark segments!
No word from Koo or CB7, regarding this. They want it to all just quietly fade into history.
If not, they would have been spearheading the restoration demand for all of the past decades,that the theater was abandoned.
Haven't heard a peep from the Flushing BID either. WTF do they do besides hang holiday lights and street banners?
WTF does One Flushing do? A lot of people are making fat salaries doing very little.

Bring back the Prospect Theater on Main Street and while your at it bring back Jahn's restaurant nearby and Hurdy Gurdy and Sundowner's Bar on Roosevelt Ave. and my favorite the Jolly Joint Headshop.1970's BC (before Chinese)haha.

Hurdy Gurdy?
You must be ancient!
Did you have tea with George Washington?
LOL...indeed!
This is Flooshing, a Chinese colony.
The civilized have fled years ago.

Community Board 7 has been acting as an enabler for most of Flushing's overcrowding and decaying infrastructure.
Of course they will bleat out their lame excuse at almost every meeting that these building projects are "AS OF RIGHT".
Poor powerless little pussies!

They tore down the rko to put up another condo that's probably going to be empty or half empty for the next 20 years.