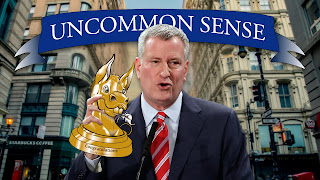 After a construction worker died in Williamsburg on one of the city's much-touted affordable housing projects last week, Mayor Bill de Blasio emphasized the role of human error in construction deaths and pointed to the city's building boom as a cause of the drumbeat of fatalities.

"Part of why you’ve seen a number of instances is just the sheer extent of construction in this city, which is now essentially gotten to the pre-recession level," de Blasio said at a press conference Tuesday. "The city is booming with construction."

Asked if the city should better scrutinize safety on publicly-backed projects, the mayor said he wanted to differentiate "between the things that we find that are structurally solvable versus the things that are individual," noting that "sometimes it is just plain human and individual error" that causes construction deaths.

“Worker injuries are caused by unsafe conditions, not by careless workers,” she said. "If you follow OSHA rules, workers don’t get killed and injured."

Dr. Grace Sembajwe, professor at the City University of New York's School of Public Health and an occupational health expert, said the mayor is wrong to draw a distinction between individual failings and issues that can be addressed systemically.
Posted by Queens Crapper at 3:43 AM

You hear that construction workers, and that includes Union workers, our Mayor thinks your lives are expendable to enhance the progress of out of scale, out of affordability hyper development. Especially when it concerns a predator like Two Trees run by trustafarian dickhead Walentas, who gave generously to Mayor Big Slow's CONY 501(C)(4) pac, whose building where this preventable death happened.

The day for De Faustio's reckoning draws ever near. Let's do it for Lefty.

Dump this doofus...QUICKLY!
Preet, the federal star corruption fighter, will clean out Duh Blaz's ass good.
How do you look in orange, big bird Bill?

This is one MAJOR WHINY BITCH that pales to Trump, a whiny bitch in his own right. I have never seem such a man never admit he was wrong, never admit he screwed up. Always another person's fault. This is a sign of a poor leader and a poor excuse for a man. A real man will admit when he is wrong and screwed.

NOPE, not this whiny ass bitch.

“Worker injuries are caused by unsafe conditions, not by careless workers,” she said. "If you follow OSHA rules, workers don’t get killed and injured."

Typical government response. There is no chance there ever was a worker that was injured due to their own ignorance or clumsiness. It is always the bosses fault.

I am not a fan of DeBlasio but it is refreshing to hear someone speak the truth. He is slowly morphing into Trump!

33 days until the Emperor is crowned!

Can it be true?
A statist communist masquerading as a socialist democrat speaking of self responsibility?

As I understand it, in their world view, it is always someone else's or something else's fault. There is absolutely NO self responsibility allowed in the liberal's world!

There are the Occupational Safety and Health Administration
Government Agency's endless pages of rules and regulations designed to fit EVERY manner of business from sales to manufacturing to real-estate to everything else.
These are the ultimate gospel of all things safety and cannot be flawed, defective nor unsuitable or inaccurate. These countless volumes cannot be questioned!

However, in this instance, the Government may have some culpability and suddenly, without thorough investigation or a careful review of facts, this poor soul is responsible...

Sarc, you did it again

This is from a liberal thinker.

He has a point here. If you look at the reports of accidents where workers are seriously injured or killed, they are mostly in the small to midsize projects and non-union.

Most of these workers are un-doc's and thus vulnerable to the types of boss who 'crack the whip" and don't give a damn.

Most of these accidents involve collapses of floors -either being demolished or built. In the latter case it involves not allowing proper time for the new pour to cure and become load-bearing.

Add to that the low level of experience of most of these hires...this is what happens.

You rarely see any of this at union sites where work and OSHA rules are enforced.

To Joe Moretti: This mentally defected scourge (I refuse to call him a mayor of anything because he is so corrupt, dishonest and dysfunctional——beyond repair, reason and now sanity itself), suffers from an affliction called 'cognitive dissonance.'

Too often, empowered idiots like shithead Bill de Faustio hold a core belief that to them is very strong. Whenever he is presented with irrefutable evidence that works against his 'knowingly' false belief system, the faulty operation of his mind rejects the evidence altogether (he has operated this way with ALL of his city government, cradle-to-grave positions of epic (and taxpayer costly) fail. Worse, the weak and ineffective press have repeatedly failed to challenge this unresponsive tyrant and his intensely incompetent adminsitration in a way that now completely devalues all honesty itself!

And, because it is so critically important for him to protect that core belief, he and his crooked staff (all of them), will continue to rationalize, ignore——and even deny anything that doesn't fit in with that core belief.

In less that two unbelievable years, this hustling, low level, pay-to-play con artist has destroyed all pretense of public trust, ethics, integrity, accountability and transparency, whilst FOISTING a hostile, aggressive hostage like environment on every NYC resident that is beginning to feel like The Third Reich all over again——only THIS time 'round on the 'OTHER' side of the Atlantic!

If this is such a big problem, where are all those future mayoral candidates on this - and by extension, city council.

People with families are getting killed and maimed. No papers. Real life nasty stuff.

This is not BS on who and what can use restrooms!

If osha is so worried about Osha compliance maybe they should hire more workplace inspectors or drink a tall glass of shut the fuck up.
-somethingstructural

non-union projects
it involves not allowing proper time for the new pour to cure and become load-bearing.
You rarely see any of this at union sites where work and OSHA rules are enforced.

that's cause on a union job site they move so slow, play hide & seek, or do nuthin

Not to worry. Duh Blaz will be fitted for an orange jump suit soon.
The Feds are halfway up his ass already. Is his "First Lady" wife a pot smoker?
LOL! Maybe Bill inhales too.

>This is not BS on who and what can use restrooms!

Silly poster, transtrenders are virtually all trust-fund kiddies, so they have the power and privilege to get laws and regulations changed for their personal comfort.

Construction workers have neither, so their suffering and death is ignored in favor of forcing buildings to let men in bad wigs into the women's locker room.

"Construction workers have neither, so their suffering and death is ignored in favor of forcing buildings to let men in bad wigs into the women's locker room."

But, they vote for a man with an orange face and dyed hair.