All eyes on Preet 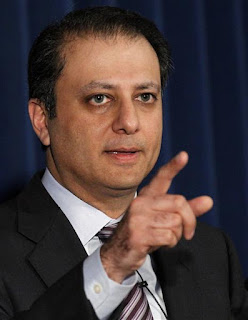 The sense that Bharara’s final shoe is about to drop is especially keen because he filed related corruption charges against businessmen, police officers, a hedge fund manager and the head of the correction officers’ union.

And with subpoenas served months ago on City Hall, de Blasio deputies, some consultants and donors, it is clear that Bharara is aiming at a substantial target.

That could be why the prosecutor recently agreed after an unusual meeting with President-elect Donald Trump to stay on past the end of the Obama administration.

While the extension removes any immediate pressure, it can’t be a license to drag out the investigation deep into the election season. With all reasonable dispatch, Bharara should make his case, one way or another, sooner rather than later.
Posted by Queens Crapper at 7:34 AM

Preet has got to cross the T's and dot the I's. We want to make sure our 'progressive' Mayor doesn't get away on a technicality.

I wonder what was said when Blaz and later Preet met Trump at his lair. If only the press had proper access to these "meetings".

Ivanka, her trust fund baby slumlord husband and the Naked Cowboy seem to have more information than the public.

Right from the city's National Enquirer.

'I wonder what was said when Blaz and later Preet met Trump at his lair. If only the press had proper access to these "meetings". '

Did I miss something? Did BHO hold open meetings? Was he open and honest with the press when he interviewed candidates for his cabinet?

Was Hillary renowned for her honesty and openness? Is that the way our government works?

Remember Chelsea knew Benghazi was a terrorist attack while Secretary Clinton sent Susan Rice out to tell everyone it was a spontaneous demonstration against a youtube video.

I would trust Ivanka and Kushner more than spoiled brat Chelsea.

I would pass on the Naked Cowboy, though.

Right on, JQ. In fact, the Naked Cowboy HIMSELF would make a better mayor than the crooked-and-depraved shithead who is stinking up City Hall and wasting millions on profligate, wanton waste and patronage hiring, cronyism and nepotism that are now OPENLY PRACTICED without consequence (except, that is, consequence for the ever languishing taxpayer, all of whom continue to pay a soul-crushing price).

And, if THIS isn't government tyranny and anarchy——then I don't know WHAT is!

Tragically, the decline of the West is something that has long been prophesied. Symptoms of decline like this (and rapid societal decay and extreme political erosion) are all around us today in modern day life (and the way our owners have been forcing us to live now): slowing growth and development, crushing debts, ageing populations.

But, what is disturbingly amiss with Western civilization is that the institutions that were once the embodiment of the four pillars of Western society——representative government, the free market, the rule of law and civil society——are degenerating (and have been over the course of the past 50 years, and counting).

I correctly refer to this 'End of Humanism' era as the Great Degeneration of extreme negligence, as well as OPENLY PRACTICED corruption, graft, greed and complacency (without consequence).

Hence, to stop the power elite (and oligarchy) from frittering away the institutional inheritence of centuries, will take heroic, NOT FOR SALE leadership and radical reform, if our flag, country and Constitution has any hope of surviving this FOISTED, post capitalist society of epic, humanitarian (and ecological) fail that is destroying even good commerce and trade!

May We the People take to activism, protest and rally to help us all!

He didn't go after Cuomo for firing the Moreland Commission after it began investigating his office.

Exactly, last Anonymous, and I am white hot with anger over how Preet, the public corruption buster managed to overlook the last 'King of Albany,' when Sheldon Silver and Dean Skelos have already been found guilty (but ironically, neither one of these voracious public thieves have served a day in prison yet, much less paid any REAL and TANGIBLE restitution for their heinous crimes, and flagrant abuses of power)!

And, until Preet removes the very source of ALL Albany corruption from its breeding point, then nothing will ever change for better living standards for New York State residents, all of whom continue to languish under a permeating cloud of more of the same corruption, graft and pay-to-play government greed that never ends!

He's petered out. Lost the wind in his sails. Lost his fighting spirit. Very disappointed in Preet for giving up . NYers needed him.