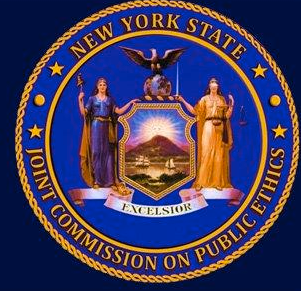 A real estate firm that played a key role in the corruption charges against disgraced ex-legislative leaders Sheldon Silver and Dean Skelos must pay a $200,000 fine for violating New York lobbying laws.

Glenwood Management, which is owned by political powerbroker Leonard Litwin, agreed to the fine as part of a settlement with the Joint Commission on Public Ethics.
Posted by Queens Crapper at 3:14 AM

Crime definitely DOESs pay in City Hall and Albany. And, not only does it pay, but it pays handsomely——without censure, and not a singly day in Federal lockup! This is what OPENLY PRACTICED government tyranny and anarchy look like——and, it has destroyed even good and fair trade and commerce——to obliterating effect!

Hence, it's finally time to make all political corruption a capital offense. Otherwise, it will continue to be the: SAME CIRCUS——SAME 'KAKISTOCRACY' OF CORRUPT, UNFUNNY CLOWNS (for whom everyone else continues to pay a soul-crushing price)!

Anon No. 2: Alas, this is not a matter for living out bloodthirsty fantasies. Shant we dwell in reality?

Why aren't they in jail? Or will they be running for office again...

Hang those SOBs out to dry!

Now, I couldn't venture to guess what type of reality under which you wish to dwell (or, rather languish), Anonymous Number 3, but MY reality is for We the People to finally restore, reclaim and return democracy to where it has always belonged in the first place (not to mention the expectation for taxation WITH representation to be the observed rule again), and not be at the mercy of depraved, empowered idiots up in Albany and down in City Hall, both of whom continue to suck the life out of ALL New York State residents with impunity.

Bloodthirsty fantasies, you say? Better for you to tune in to the 'Twilight' vampire series for such whimsy, then. As for right here and right now, we overtaxed, overburdened residents have our OWN ironically political, cradle-to-grave vampires to drive a stake through the spot where hearts purportedly used to beat, as we continue to fight and battle systemic corruption throughout city and state government that is SO COMPLETELY entrenched——that it now DEVALUES all honesty itself——to pathological and traitorous effect!

$200K is all they have to pay ?
Its a steal and worth every penny of it, this is why the attitude in NYC is corruption and ignoring the pays !!

$200K in nothing more then a nuisance tax to get things done.
The city needs laws to allow easier seizure of property and mandatory jail.

It's the cost of doing crooked business, last Anonymous, in a city that continues to reward the power elite and Illuminati, at the expense of the hardworing rank and file, all of whom never get a break as they are busily occupied with towing the line that these empowered idiots continue to betray with impunity (for which there are never any real consequences).

Pay-to-play has never been more openly practiced, and only getting worse by the hour under THIS entrenched administration that continues to reward monstrous fail!