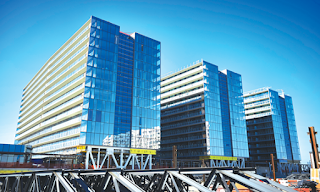 Even to passing observers, the strains on the neighborhood’s infrastructure have become obvious. While both the MTA and LIRR serve the area, the streets around Flushing’s Main Street are one of the most congested in terms of vehicle and foot traffic. For motorists and business owners, the availability and price of parking is a big concern. On any given weekend, traffic slows to a crawl as frustrated drivers circle crowded parking lots.

“It’s like putting a size 7 foot in a size 6 shoe,” said Dian Yu, president of Flushing’s Business Improvement District. He fretted that major traffic congestion will discourage the very consumers new developments are aiming to woo.

George Xu, CEO of Century Development Group, which is building a 14-story mixed-use project on Farrington Street and 35th Avenue, noted that his friends have begun parking north of Northern Boulevard, the thoroughfare that marks the northern edge of Downtown Flushing, just to avoid the congestion. Xu himself confessed, “I don’t like to drive there anymore.”

The city has also acknowledged the overcrowding. The de Blasio administration recently nixed a massive rezoning plan for Flushing West, an industrial zone between the 7 subway terminal and Flushing Creek that the mayor had targeted for affordable housing. The decision came after City Councilman Peter Koo, who represents the area, wrote a letter to City Hall, saying: “Concerns arose about the sustainability of nearly every major category in the urban planning spectrum — affordable housing, public transportation, traffic, school capacity, small business and residential displacement, and environmental remediation.”

Joseph Sweeney, a chairperson on Community Board 7, which includes Flushing, said he researched the rezoning plan and agreed that it wasn’t sustainable. “We were not ready for it,” he said.
Posted by Queens Crapper at 9:26 AM

Idiots. That's every neighborhood our genius mayor wants to rezone. Are they finally going to stop?

"Elementary conclusion, my dear Watson!"
CB7 , Councilman Koo, and the rest of the usual suspects, voted for Flushing Commons and eliminating the needed Municipal lot #1!
What a pack of self serving jerks! As long as developers are buying our elected officials, we are screwed!

Was this the same jerk wad Joe Sweeney who voted "yes" to build over the municipal parking lot?
F&T Developers bought muni lot one. Peter Koo cheered. Of course, Michael Lee (F&T) are asshole buddies.
If anybody bucks development in Flushing, the borough president removes them from CB7.
Borough hall exists to grease overdevelopment in Queens. They benefit by developers contributing handsomely to their election and re-election campaigns.
Trump is right. Drain that fucking swamp of political pond scum!
Flush CB7!

So the "cure" is worse than the "dreaded disease"?
Overcrowding vs dark minority crime?
Racism is alive and abundant in beautiful downtown Flushing.
Forget about the sacred Flushing Remonstrance. It's all a sham. Just read between the lines.

Anyone could have told you that...areas of Queens getting like that! Yet they keep on overbuilding and overcrowding our communities.
Every little space a house.

When do these officials and the predator developers come to these realizations? By happenstance when they experience the inconvenience themselves, like trying to find a place to park their luxury cars with their government placards?

If we started deporting like we should, you would see the population decline. Also, we have to stop giving away so many visas per year....one million/year is WAY TOO MANY!

I detest Trump so my words are not in any way an echo to his radical statements, but for years now, I have been of the opinion that the Chinese, of all groups, need to go. They destroy our neighborhoods with over-population and over-development like no other group does. They should stop allowing the Chinese entrance into the US, or at least, entrance into Queens. We do not want or need people that are going to soil the area with over development and cheap and aesthetically grotesque housing. I cannot count how many beautiful old homes they have destroyed... and not just in Flushing. They have ruined many areas besides downtown Flushing, and if we don't do something about it, they will press onward in a Northeastern direction, leaving a trail of shit behind them. Local politicians are to blame. How dare they come out with this declaration now that it is too late to reverse any of this damage.

Flushing is overcrowded? Tell me something I don't know.

Maybe as soon as Marilyn Bitterman retires....long overdue...we might get somebody that has 20/20 vision.
And what about Gene Kelty?
Needless to say that shady follow the Buck Chuck Apelian needs to be dumped.
How long has he been a heavy on the board?
Too fucking damn long!
Term limits for everybody in government.

We no want affordable house for working people. Only Chinese money for investment to screw American tax payer.

Re: "I have been of the opinion that the Chinese, of all groups, need to go. [Then statements afterward to justify this opinion.]"

So your argument is to ban and deport a race. Ok. It's instinctual to fear or hate on people who do not belong to your own "group". But I beg you to take a look, deep within yourself, and ask if hating an entire race is something you wish to harbor and spread for the rest of your life. As it's often stated, racism is a crime against humanity. Your argument was promoting just that.

I actually sympathize with your concern about development in downtown Flushing, but your argument reflects only ignorance on the matter and bigotry.

@Baverso:
oh stop being a clueless social justice warrior for a race that stealthly encroaches on businesses and neighborhood housing. They target and take over one lone house on a target block, and within 10 years all the houses on that whole block end up asian owned.

Need proof? Go to 56th ave by Newtown field, there was a beautiful green house there which has been recently demolished.
For years it was stealthly scoped out and targeted by asians. Right after asians managed to actually buy that house, they burnt it and destroyed that beautiful house.
Now there are is another house recently demolished on that same block. They even have the gall to form a development company and call it "The 56th ave Block Association"!!
WAKE UP!!!!

This is so racist I don't even know where to begin.
Maybe some born and raised Americans can learn from the work ethic of the Chinese. I meet people everyday who grew up in the US who barely graduated from high school.

>>Chinese, of all groups, need to go. They destroy our neighborhoods with over-population and over-development like no other group does.

Manhattan is over developed. It's not filled with Chinese. What an ignorant statement.

Weren't they just telling us a few years ago when they let someone build over that giant parking lot that it wouldn't have any effect on parking?

Can we get a list of all the liars who made that claim and fools who believed it and approved it and punitively punish them?

when I.C.E. gets realeased on Flushing ,Main St. & Queens county soon,the illegal criminal immigrants will be removed . the sidewalks will not have to be widened to accommodate the illegals who have over stayed their VISAS. The D. Manes Marxist /Dems sold out the Queens county,and this is the result of crooked gov. dem .officials. and they are still at it.

vote for Patriots ,NOT MARXISTS

@anonymous
oh stop being a clueless social justice warrior for a race that stealthly encroaches on businesses and neighborhood housing. They target and take over one lone house on a target block, and within 10 years all the houses on that whole block end up asian owned.

The burden of proof remains on you to support the claim that an entire race is committing property crime. These anecdotes are insufficient coverage.

Challenge your conclusions drawn. Seek people who are unlike your own and you may expand your universe just a little more. Or even email me (my username above) at gmail. I'd be happy to have a coffee and hear your thoughts in person. I don't bite. I'd like to help break down these barriers you hold. I wouldn't have to play social justice warrior if racism wasn't a part of the human condition.

>Or even email me (my username above) at gmail. I'd be happy to have a coffee and hear your thoughts in person.