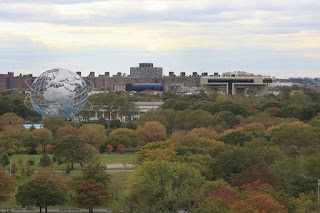 Borough President Melinda Katz has launched a pre-emptive strike against the city Parks Department and three entertainment giants that are seeking to use Flushing Meadows Corona Park for paid-admission music festivals this summer. Madison Square Garden, AEG Live and Founders Entertainment have all filed applications with the city to close off large portions of the park in order to stage events.

The same three companies attempted to stage music festivals in Flushing Meadows Corona Park last summer, but their applications were denied after fierce opposition from Katz and numerous civic associations. Parks Commissioner Mitchell J. Silver said he would explore new rule-making to create an appropriate framework for approving large-scale multi-day events in the park, including limits on the potential number, scale and nature of any such events so as not to have an unreasonable impact on the park and its users.

These new rules have not been established as the Parks Department reviews the applications. The city has until Dec. 19 to approve permits for the entertainment giants.
Posted by Queens Crapper at 3:15 AM

So wordy! Politicians of yore understood that brevity was the soul of honest graft: "The envelope wasn't fat enough."

Hey, look who crawled out from her ladycave or from some rock by that rusty corroded pavilion she loves so much.

Of course it's too late to do a fucking thing to stop these shitty promoters, it sure didn't stop them from doing that retarded parking lot concert where the headliner bailed without finishing his first song. Typical last minute bloviating by an elected who has failed her borough.

Our parks are going to look a lot different next year. For they will all be privatized and be extremely inaccessible to the full-time long-time residents.

If festivals come to this park...clean up the park.

I worked in the businesses wih band like The Who, Aerosmith (FOH Sound & Backline tech (Jones beach theater) Guitar teck and touring musician)
Katz doesn't have a clue what shes getting herself into and how bad shes gonna have roughshod run through her. These AEG people aint the boy scouts and the fine-print in contracts will be VERY hard for her to understand.
Once they get a foot in the door, toss some $$ around and take over THATS IT and there will be no going back without 10's of millions of dollars in lawsuits the clueless city WILL lose.

AEG Live, Live Nation etc is worse then the mafia, they will research tell you a plan you wanna hear then bring in their own people anyway. Once in they will lock everybody else out including bands they don't own.
This is good for local people ?
This includes everything from loaders, sound, staging, lights, monitors, video, people working the swag & merch and catering. Yes Catering, they have huge special kitchen buses now. AEG leases them from Hemphill Bros in Tennessee
With these promoters the only people who MAY see a job is some local IATSE member working a stage or kid hired to picking trash out the grass.
AEG (or whatever they will call themselves this upcoming season) will do NOTHING but REMOVE money from Queens. Katz is making a BIG BIG MISTAKE to even consider playing ball with these mosters.

She should form a company and run a part of the park as a concession using ALL local people. Book bands and contract insured professional local sound & light company's. Operate it like local Bruce Robbins does with the tower stage at Rye play-land. He buys fun bands like Cheap Trick, Joan Jett, The Bangles, and local Tribute Bands direct. Its not rocket science. ---Dont need AEG

What does Katz have to say about the USTA and their take over of space?

Let the party happen, but in that field in front of the science center. And use that lot for parking, limit the crowds to 5000 people.

She will eff it all up, nobody in her circle has any real experience in these matters especially with the type of sharks they are playing with.
I smell Joe Crowley and his shitty musical drivel having special interest in this and popping out of the woodwork shortly.

These 2 jackasses craving that performance limelight completely f_cked up the New York State pavilion reception a wile back. Speeches & speeches and more abysmal PR speeches, horrible snippet singing & guitar playing for the media. Delayed everything till every reporter and tripod was set up causing something like 1000 people in line HOURS to be turned away. Including taking credit for the sweat and ass busting other people did.
The line of people & kids waiting went across the GCP bridge all the way to carousel area.

100% Agreed on using the field in front of the science center. Use that lot for parking, limit the crowds to 5000. Invest in a mobile unit with nice black backdrop , FOH sound an lights and hire a local tech to run it on a seasonal basis. The audio video tech who work's in the Hall was the Ramones sound engineer and is already on Salary with benefits.

Having the crooked sloppy Parks Department & carting IA review and decide these applications without calling in expert help is like a patient performing brain surgery on themselves.

This is just crazy, I wonder how much payola is involved this time and who is taking it home. Katz needs to go into full defense mode and kill this shit once an for all. Hire experts and stop this "army" of corporate cockroaches from parachuting into Queens.

Think the park won't be taken from the public ?
They closed the Queens Museum during the U.S. open. When I called to find out why I was told a bullshit story about security issues for the tennis stadium ! The real reason was they wanted all the parking spots for the upper strata snobs !

During the US Open both museum parking lots were taken over by the Police and other emergency vehicles.
Katz and our elected officials all support the shopping mall in Citi Field parking lot, I'm wondering how that will play in the mix. The old saying " build it and they will come" doesn't hold up here. When there's a big event shoppers will stay away to avoid traffic, I know I do.

These promoters are not interested in quality music people or people who cars but more the "burning man" "deadhead" trustfunder types that backpack & hitchhike around the country.
BTW the 2 day tickets to these corporate concerts will cost ya around $250 and up and you can not bring in your own food & drink. A 16 oz water will cost you $3 and you must use AEGs food venders operating all the food and concession stands.
No leaving and re-entering (read the tiny fine print and disclaimers in contract the Rider's security & vetting section) Locking festival goers inside (no-readmission )means ZERO for community commerce !!
A couple of two will be be fleeced near $1000 to attend.

PS:I remember seeing The WHo and The Clash at Shea stadium for $7.50
How is it production costs have gone DOWN due to today's modern compact powerful equipment yet ticket prices are near 20X more easily exceeding $125 for a single 8-11PM concert ?

>PS:I remember seeing The WHo and The Clash at Shea stadium for $7.50

Wasn't that almost 40 years ago? Inflation, combined with the impossibility of making bank on record sales alone in this digital age.

And, of course, promoter greed, examples of which you just gave.

Plenty of stadiums there now. Let promoters rent one, and sell tickets to their concerts. Keep the park open.

> Plenty of stadiums there now. Let promoters rent one, and sell tickets to their concerts. Keep the park open.

Wait, are you saying these concerts aren't going to be taking place in one of the stadiums? Where else in the park would they hold it?