Large number of NYC shelter residents are not from NYC 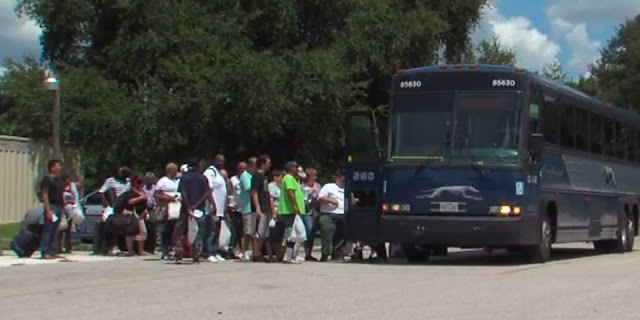 I crunched the numbers from the FOILs that are out there and here is what I found:

Grand total is 9891 people from outside NYC
Total homeless in NYC as of today: 58917

At least 17% of the total shelter population is from outside NYC.

And NYC taxpaying suckers are paying for their food, clothing and shelter while the places they came from pay for bus tickets.

So when Christine Quinn says shit like we should just get over having homeless shelters in our neighborhoods, she can suck it.
Posted by Queens Crapper at 12:00 AM

Quinn has a set doesn't she? Where does she live? Does she have shelters around her neighborhood?

I guess that's why she's working at a shelter and not mayor since us new Yorker's need to get over ourselves since we didn't vote her in. Disrespectful moron.

Does that include the illegals that are homeless here too? I wonder how many of these people don't even belong in this country to begin with. Can we crunch some of those numbers too?

A Pulitzer for Queens Crap!

I have been waiting for some power that be to crunch those numbers, since we knew if Queens Crap did not do it, it was not going to get done.

NOW this is real FAIR & BALANCED and cuts through the bullshit.

Now crunch those numbers even further by criminals, chronic unemployed, mentally ill, drug addicts, the totally lazy, etc to see the REAL homeless count. You will find the true homeless count is not as high as they make out to be. Even at the false high numbers, there still is NO HOMELESS CRISIS in NYC. Again, this is just the big business of homelessness and shelters, while certain folks get rich and the actual homeless are tossed aside and not properly helped.

Christine Quinn is a neoliberal misery profiting hypocrite douchehag. I knew this woman was shit when Mayor Fun Size appointed her speaker, and she just stood by and said nothing as all that wildfire rezoning and upzoning of the ground and air got approved. The only time she got off her dumb ass is when she gave him and his billionaire committee and spineless city council approved and immoral third term.

The gay community really has opportunistic shills and fiends in elected office. Jimmy Von, Dromm, Torres from the bronx are just off the top of my head.

The shit that comes out of her mouth now is just reflective of the deep-seated contempt she and every elected hack have for the citizens of this city, mostly against the ones who call them out, and apparently there is a lot of righteous anger being verbally expressed. I sense she will go down when she tries to stick her porky fingers into the funds of her little venture, Because types like her can't help themselves.

Get over it yourself, you fraudulent slag.

The government collects data on everything, including insect mating and reproduction rates.

However, you will look forever and ever an not find one bit of information on the citizenship or legal status of anyone!

They do not even check for pedophiles!

There are two people running for the position of President of these United States.

Think about it very carefully, and the answer is blatantly obvious...

No shit !! If you didnt already kniw that fact where have you been living these last couple of years.

GUYS, YOUR ELECTED ARE THERE FOR ONE REASON - FURTHER THEIR CAREER WHICH MEANS FINDING EMPLOYMENT FOR DEMOCRATIC LOYALISTS IN THE WELFARE STATE SYSTEM, BRINGING IN POTENTIAL DEMOCRATIC VOTERS, AND KEEPING YOU QUIET WITH STUPID PHOTO OPS WITH TARGETED CONSTITUENTS.

UNTIL YOU GET AGGRESSIVE IN SPREADING THE WORD ON HOW COUNTERPRODUCTIVE AND USELESS THEY ARE FOR YOUR COMMUNITIES YOU CAN PRETTY MUCH DO SQUAT.

It's time to take on the Right to Shelter ruling, the liberal judges of NYS would never overturn Callahan v. Carey but the Supreme Court might (if Hillary doesn't get in). NYC will go broke supporting out of town freeloaders (legal and illegal). We need all the $ we have for the other asinine projects our 'progressive' political hacks come up with. While I'm at it, this Sanctuary City bullshit needs to stop as well.

Where are most of the outside people coming from?

If it's Yonkers ,New Rochelle , Jersey City or somewhere in CT then that's a different type of issue to resolve then people coming from San Fran.

Also, these numbers don't even take into account the people who might've been able to crash for a few weeks / months with a friend or relative in NYC who eventually turned them out after plans to secure an apartment didn't materialize.

So when Christine Quinn says shit like we should just get over having homeless shelters in our neighborhoods, she can suck it.

And so can Elizabeth Crowley. Oh, wait, that's right - she already does.

Its all bullshit. How about Assemblyman Ron Kim, helping secure permanent NYCHA housing for this non resident, because he is Korean. Gee, I thought Section 8 is closed out for years. All the elected are self serving, only care about their cultures ,and don't give a shit about you and me. So waiting for someone to call him out on this , and also the Korean
American Association. Catholic Charities and UJA helps everyone, KAA only helps their own. http://www.qchron.com/editions/north/kim-and-aafe-help-house-exonerated-man/article_45285d2e-48a6-50cd-84b5-988ab0f62107.html

FOIL for families with children

When the vacant new mega structures being built at great speed hit a glut, greedy landlords will opt for section eight.

Maybe they flew here thinking someone would take them in, and were mistaken?

If they came here for family or work and something went wrong and then they ended up homeless, that is different then coming to NYC for the purpose of using the homeless shelter resources.

How does the data differentiate the two?

>>Maybe they flew here thinking someone would take them in, and were mistaken?

This is a homeless crisis, but it's a manufactured crisis, and it is run like a business, which explains the former petty and futile speaker's volatile statement and why she is now the CEO of a non-profit designed to help but clearly to make bank. It's a new form of disaster capitalism on a local level as written in the Shock Doctrine, maybe it's more like poverty capitalism. The neo-liberals of today are exploiting this new depression like the neo-conservatives exploited the war on terror in the last decade (ironically, the neoliberals are exploiting the war on terror today)

And it's clearly being gerrymandered in my opinion, which makes it doubly sick the way they are bussing the destitute around, especially in a recent story that transferred a bunch of single mothers to a hotel in Jfk from a shelter in Brooklyn. They are even opening up a shelter in Williamsburgh. With the L shutting down, that town has suddenly become expendable. And I don't have to bring up Jamaica, where they are doing a jeckyll and hyde style makeover with the combo hyper development of affordable luxury towers and hotels.

What crappy is doing here is on the level of a Propublica report. Gotta say it's fucking awesome.

The decline of a area is noticeable when laundry mats,check cashing and liquor stores open up....Grand Avenue has all of that and more.

Lived in Maspeth almost 50 years....Metropolitan Avenue has the same situation.

>What crappy is doing here is on the level of a Propublica report. Gotta say it's fucking awesome.

This. I really admire that he's doing this research and legwork.

Don't blame the homeless if your a sucker working 9 to 5 and paying your bills with that funny green stuff, me, I always vote for the guy or gal who promises to make you pay my bills,they could never tax the working stiff enough to make me happy
Hillary 2016

How is that all these commenters hide behind the name Anonymous? It could be you one day in a homeless shelter and in need of a home. Where else do you expect to house people in an already crowded and expensive NYC?

How about back where they came from since that is the point of the post?