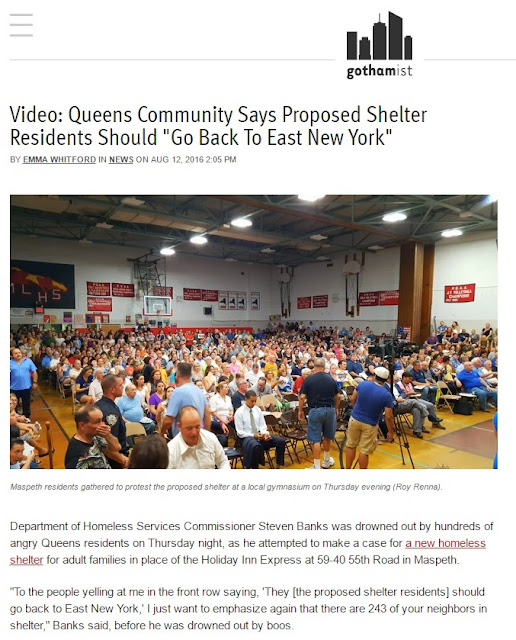 Department of Homeless Services Commissioner Steven Banks was drowned out by hundreds of angry Queens residents on Thursday night, as he attempted to make a case for a new homeless shelter for adult families in place of the Holiday Inn Express at 59-40 55th Road in Maspeth. 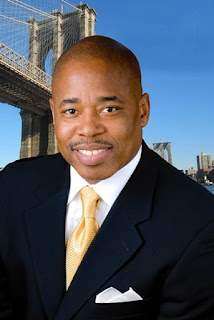 “I am troubled by the sentiments shared by a number of individuals at a public meeting that discussed a proposal for an adult family homeless shelter in Queens. Homelessness comes from every corner of our city. We cannot accept any attempt to pit New Yorker against New Yorker, no matter how passionate we may feel about the quality of life issues in our communities. The select few who call out for homeless people to go ‘back to East New York,’ especially in the context of a gathering regarding a newly proposed facility and not a re-siting from that neighborhood, are raising a concerning specter of bias that must be addressed, be it on the basis of race, socioeconomic status, or any other factor.
_________________________________________

The only problem is that this is not what happened. Here is the video:

ONE person sitting near the front shouted "This is not East New York" when the DHS Commissioner asserted that there are 243 people from Maspeth in the homeless system, which has already been proven to be a lie. Obviously, East New York is an economically depressed community which will have more homeless people than Maspeth. (But it's more fun to make facts up in order to produce sensationalistic headlines.)

FYI, Eric Adams is planning to run against de Blasio.
Posted by Queens Crapper at 6:09 PM

Another sham price of crap race baiting know nothing could care less politition.

Send the link to Eric Adams, and ask him correct/retract his press release.

does Dizzy Lizzy really know anything? just a puppet

A GREAT turnout from the residents of Maspeth.

Keep fighting for your neighborhood!!!

Facts are irrelevant so long as the Race Card is thrown at you and the media runs to print,50 % of the white people in that room voted for Obamas progressive liberal agenda never thinking it would come back to bite them in the ass,lol,I hope to live long enough to see All of Queens turn GHETTO
Hillary will Finnish what Obama with your vote and blessing turned this once great nation into.

Even though this political hack made a false statement (wow, how unusual for a hack pol), BUT the reality is would any civilized people really want most people from East New York in their backyard - HELL NO. Not even people from Jamaica would want them.

Gothamist's reporting is hit or miss, and they clearly have a bias toward making New York one large handout city, but I don't think they were out to willfully lie here - they just reported the DHS representative's claims.

The comment about east new york should not have been made at all. That is what you all get.

Ta gets ta dump 'em somewhere....so why not in Maspeth?
Dats da way the brothers and sisters of NYC city planning see it. The northeast won't have 'em!

"The comment about east new york should not have been made at all. That is what you all get."

Why not? It's a hell of a lot more likely that a neighborhood like East New York is producing homeless far, far more than one like Maspeth, where houses are passed down from generation to generation.

Eric Adams, once a decent person who advocated for change in excessive force, corruption and abuse in the NYPD years ago, now as Brooklyn BP/Maitre D is another corrupt official running a Slush fund/(c) (1) 504 in his office with most of his donations coming from the sharing economy's criminal enterprise AIRBNB. Which has led to the displacement of thousands of residents that he supposedly is concerned for. He has oversaw rampant gentrification that is possibly responsible for the majority of homeless that aren't drug addicts, recidivist criminals, mental patients or out of state. But he's good for releasing a sel-righteous press statement maligning a community. Classic sellout, as Malcolm X would say.

And there is that fistfuck worm-tongued lobbyist James Capalino yet again, who is practically possessed by the ghost of Robert Moses.

I am not the least bit non-plussed that Mr. Adams would admonish people for being intolerant when he is also overlooking, perhaps willingly, avaricious and immoral slumlords doing gut renovations and using initimidation tactics and buyouts to drive out tenants, the placement of cluster shelters and all the buildings run by the wretched NYCHA in Goddamn Brooklyn. It's clear wh he should place his self-righteous indignation in his own jurisdiction.

As for Gothamist, they are full of shit themselves. Cut and paste as journalism. Their attempts at longform stories about the injustice and real estate plunder in this city are just obligatory. They are only good at doing articles on food crazes, keeping saturday night live relevant, and bullshit event and festival concerts. And as their headline shows, what they proudly describe as clickbait.

Don't try commenting on there, they treat dissent, even if it's not vulgar, with censorship and abolishment

I clicked a Gothamist link to "A Queens Blog" and it led me here. They can't even give proper respect and credit where it's due.

I wonder who really owns Gothamist, especially since it has sister sites in san francisco, chicago, dc, and even shanghai!. I am looking forward to Fallujahist and Kabulist.

Event and food fetish worshipping chumps. They are out of their league. Unless it's bush league.

>"FYI, Eric Adams is planning to run against de Blasio."

Judging soley from this article, is he going to be worse then DeBlasio? He seems to think filling up Queens with Brooklyn homeless is a good idea.

I hope he's at least opposed to Vision Zero.

>"Don't try commenting on there, they treat dissent, even if it's not vulgar, with censorship and abolishment"

Sad to hear Gothamist has gone full SJW, but I'm not surprised.