Most of Queens has been screwed by the MTA 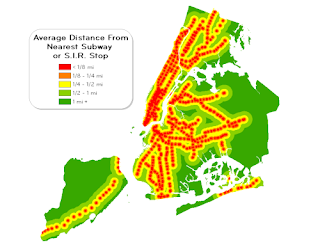 In New York City, about three-quarters of residential units are within a half mile of a subway station, according to a 2015 report by New York University’s Furman Center. The statistics vary widely by borough: In Manhattan, about 94 percent of units are near the subway, compared with about 54 percent of units in Queens.

But we in Queens should not have cars because "you can get everywhere by subway in NYC" (meaning Manhattan).

And let's build a streetcar to connect neighborhoods with subway stops instead of improving bus service.
Posted by Queens Crapper at 6:45 AM

Are you still going to want those bus improvements when it means taking away space from cars?

But this was taught in the urban planning class...

Bullshit. The MTA did not have a hand in building post-war eastern Queens housing. The inaccessibility and lack of transit in these neighborhoods was considered a plus and a selling point at that time. The whole point was to get away from density and mass transit and own your own piece of green, and own a car. If you needed a train the LIRR was available.

"But people don't need cars. They should bike to work, supermarkets , and the beach." Parking spots should be replaced with bike lanes. That's what Trans Alternatives wants you to believe.

It looks like Staten Island really gets screwed but I don't think anyone lives there anyway.

they screwed 7 train riders by only building a 3 rail system that doesnt offer commuters full time express service into Manhattan.

Fire everyone of those mofo's on the MTA Board, fire the politicians,fire all of them mofo's

"Bullshit. The MTA did not have a hand in building post-war eastern Queens housing."

WWII was decades ago. The bus system has not been improved since then.

When the growth rate of rental and sale prices cool, George.

Trust fund kiddies don't live in Queens, don't have to worry about money, but the love telling us what to do and how to live.

>When, oh, when, will this insanity stop?

When we elect a new mayor.

I love the bike lanes. A little exercise will do you good and you might even live long enough to start withdrawing from your 401k before you drop.

Do the folks living in Eastern Queens really want the subway system extended to their neighborhood? wouldn't this result in up-zoning the area, more and more high rise buildings, and eventually ending up over-crowded like Flushing has become?

Wasn't this in 1920?
Aren't we taking conspiracy theories a little too seriously here? The decision was made based on the economics and population of the neighborhoods at that time.

MASPETH IS AMERICA ... can't get that out of my head.

>Do the folks living in Eastern Queens really want the subway system extended to their neighborhood? wouldn't this result in up-zoning the area, more and more high rise buildings, and eventually ending up over-crowded like Flushing has become?

Eastern Queens is going to get overcrowded one way or another, barring some catastrophic economic collapse.

We might as well prepare and have the infrastructure and transportation ready.

Pity the poor suckers who are paying $4,000 a month to live in four or five railroad flat rooms in six to eight family walk ups on the North side of Williamsburg.
Now their beloved L train, AKA the "Canarsie Line", will be out of service for a year and a half which will probably end up being two and a half years.
And many of the residents of the area are asking landlords to lower their rent because of the shutdown and they want special services from the MTA.
Boo-hoo-hoo...It ain't hip to be a hipster anymore.

I personally would not want a subway station by where my parents lived in Queens which is bayside because with subways bring more homeless and more crime. Better bus service, I would agree with but not subways.

"WWII was decades ago. The bus system has not been improved since then."

And any significant attempt at improving it is met with resistance from the blowhard cranks who think that they are more important than all the peasants riding the bus.

I DON'T want a subway near me. What I do want is bus service. I used to take the Q26 to the 7 train. I can't do that anymore (thanks to previous transit cuts) because I don't work during the limited time the Q26 runs. I have a choice of ONE bus to get to the 7. Now I need to walk almost 15 minutes (I am old and slow) to get to the Q27 which usually passes me by. Why? Because it has become a school bus for the kids from Cardozo and Queensborough. By the time the bus gets down to me they are full (or the kids are standing in the front and the driver doesn't stop even though it looks like plenty of room in the back of the bus). Transit is becoming worse and worse. The LIRR is just too expensive to take. Even so, I would not want a subway stop too close to my house. I think it would have more negatives than positives.

Stop yer bitchin' and git yer "old and slow" ass on a bike and on those nifty, new green bike lanes!

I agree I don't want a subway near my home as well !
I moved to North-East Queens to live in a low density neighborhood and if it changes too much I will move. I prefer driving my car as opposed to mass transit. When I venture into the city the twenty some times a year I will use local buses to the #7 or LIRR trains. If it's not broke don't fix it !

Select Bus Service? Not talking about that. How about running the regular buses more frequently? Some things are simple.

that's some choice story cropping. I wish I never clicked that times link because it was all about the L shutdown (of just 4 stops). The times should quit as local news resource if all they are going to report on is the concerns of walking dead tourists and generation gentrification

The shit people have to do and endure to commute, dollar vans, transfers and the time allotted by just taking the train. And they want to encourage biking. Does that mean more spaces for Shitibike stations? Will the city and state encourage the MTA to set up routes leading to these shitibike stations so they can ride over the bridge?

My bike commute used to take an hour, but because of the cost of living and stagnating wages I moved further east twice and now it takes me 90 minutes. Compounded by the fact that I am pushing 50. This is not an ideal alternative. I refuse to believe that all these bikers aren't all aching and exhausted after doing this daily, even if they live in LIC or Williamsburgh.

Wasn't the unlimited metrocard supposed to improve service (and in a way it did) in addition to all these inflated hikes. What happened to all the money spent by advertisements and by the 5 billion tourists that have come here in the past year that is constantly bragged about. They could have arranged new bus routes with these resources. Are buses that deplorable by the visitors and these frivolous spending transients that have colonized our once boring towns. Maybe if there were more of these precious amenities like wifi and usb chargers.

They will wind up with new shuttle buses. It will be set up nicely by bedford ave and these commuters might benefit with extra stops in the east village and the LES before it heads west up 14th. The problem is the city is going to need a lot of buses, with a lot of amenities, and as we have seen with all the development, restructuring and visual and aesthetic improvements in stations and parks, these brave new citizens will get it, And Queens residents will find more difficult ways of getting around

After all the heat weave we been experiencing the bike lines are really a brilliant idea. For population control that is.
Add the lovely winters with snow and ice, the nasty rainstorms in the spring and fall and soon it becomes obvious that the bike lanes are seasonal. Like the neighbor's swimming pool.
I don't about you people, but when I take public transportation USB and Wi-Fi are the least of me worries. Good service is.
Is there a requirement to have iPod on wheels?
As far as the Metrocard goes, well they get your money beforehand in advance.
Once the money is theirs, screw the people. Ever compared the time used to take to buy 2 tokens with the insanity that prevails at the vending machines? Plus the $1 fee to get a new card. Can you spell ripoff?
This is what they call progress.

After all the heat weave we been experiencing the bike lines are really a brilliant idea. For population control that is.
Add the lovely winters with snow and ice, the nasty rainstorms in the spring and fall and soon it becomes obvious that the bike lanes are seasonal. Like the neighbor's swimming pool.
****
one of the reasons the bike craze of 1900 was a craze that vanished with the auto, and all the bike commuters in China disappeared when cars became avail.

But if it lowers the carbon footprint for developers, it will be encouraged, abetted by the hipshits that have never learned critical thinking.

Why is it a felony to assault a clownswit yucker? It should be an obligation.

Queens is the butt hole borough of NYC.
Butt holes exist to expel waste and get screwed.
It is Queens' destiny.
So let it be written. So let it be done!