Speaker is full of herself, among other things 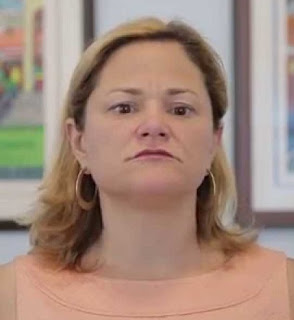 The speaker of the New York City Council, Melissa Mark-Viverito, has an unusual strategy for solving city problems. When she came upon a broken Walk-Don’t Walk sign, she didn’t call 311 to report it. Nor did she shoot an email to the Department of Transportation’s chief to convey the importance of fixing this particular safety device—perhaps more quickly than normal. Instead, Mark-Viverito tweeted about it.

Surprisingly, a staffer at DOT saw Mark-Viverito’s tweet. But this on-top-of-it staffer almost immediately responded in kind—via Twitter—and informed the speaker that the most effective way to get fast action was to call the 311 hotline.

Mark-Viverito responded in full huff: “whaaaat???” she tweeted. “This a joke? Or an auto response? Or maybe even an intern? Not a response for an elected.”

Unfortunately, Mark-Viverito made it all about her: you don’t know who I am? Is an “elected” a new protected class? Is her sense of self-importance so out of control?

If Mark-Viverito had called 311 or emailed the DOT commissioner and not gotten results, a tweet would certainly have been appropriate. But we’d like to suggest to Mark-Viverito that a public servant—yes, that is the more appropriate word for an “elected”—is here to serve, not to huff or berate. And that includes disparaging interns.
Posted by Queens Crapper at 8:10 AM

What a fool to think she is above calling 311 or just sending a e-mail !
She really looks like a beady eyed little man boy with thin lips.
Term limit her out and lets move on.

How much do you want to bet that she runs for mayor?
Gag me with a spoon!

This entitled and unethical jerk needs to go find a real job.

Looks like HILLARY has set the bar. No one who is elected -- especially one with a vagina -- is to be asked or told anything.

Not only are they above the law, they are not to be spoken to except through their "handlers". Looks like we have imported British Royalty.

Immature and juvenile behaviour from someone that went to college, got appointed by the mayor (via lobbying expenses of course) and who is her goddamn 40's. This may be the worst and most corrupt administration this city has ever had. And I am talking about over 50 years of low standards in city leadership getting worse by the minute.

I have never seen someone behave and look like a troll simultaneously.

M how is exactly right about Manifest Hillary setting the bar for the dem party. It's why she is only 4 % ahead of Trump in the national polls. No one trusts her or the establishment she's is spreading in local areas

It is an appropriate response for an electard!

I've tweeted DOT before and had a similar response. It sucks, no matter who you are.
It would be useful to have better responses - and if anything comes of it I would hope that it is that DOT & 311 coordinate their social media better.
I think it's horrible she expects people to (1) know who she is, (2) care, and (3) treat her different.

Please, peasants--you've birthed your own monsters and they are here to dominate, self serve and obliterate everyone and everything else--and, they now operate ALL branches of rogue, city government collapse, to the point of complete public trust betrayals, that they now DEVALUE all honesty itself!

Now, I have been waiting for my damaged curb to be repaired (that was destroyed by the DOT, after they repaved my street in October, 2007), and no matter how many times I have called Community Board 10 (completely worthless, political patronage!), and my senator, assemblyman, city council thug and especially 311, nothing has ever gotten done to fix the damage.

I even met face-to-face with 'Snakey-Face,' Mark-Viverito herself at a proclamation ceremony at City Hall in October, 2014, and told her my dilemma face-toface! She looked at me blankly and told me to call 311 again. When I told her that I had done that for more than nine years of epic fail and city unresponsiveness, she gave me the number of someone named Jean Ross, who never returned my repeated telephone calls---ever!

This is organized crime, folks, not public service--and, de Blasio, Mark-Viverito and the entire cabal of City Hall thugs-and-slugs don't live by the rules--they make their own.

Now, the city tells me that I can pay to repair the curb myself that the DOT damaged in 2007 (and now the bordering sidewalk which became damaged over time as a result, because it sunk from no curb support, and a small lake appears every time it rains), and the city will reimburse me for the repair. I would sooner trust Caligula--I am not placing another call to 311 or anyone else--they have collectively robbed my youth, health and sanity over a simple matter like repaving a damaged curb (and now, sinking sidewalk). They do not care about ANY human life, much less blocks of damaged concrete.

So, the city can rotate in perpetuity--exactly like my curb and sidewalk is worsening by the hour, without almost 10 years of wilfully missing help that I myself alerted them to repair and finally fix. I could have lived in a space station in the galaxies and returned faster than these arrogant imbeciles would take action (ANY action), to remedy my curb's damage!

Hillary is a criminal,do you think that is going to stop people from voting for her? Do You,of course not and she will win and I hope the entire country implodes because we deserve it,we turned our backs on the greatest civilization ever created for free government bread and cheese and shit on every veterans grave who gave their life for our freedom,
We don't deserve freedom any longer and I'm voting for the crook to speed up the collapse.

Do council members have dental plans??

To the last Anonymous: Didn't you mean to ask, "Do council members have 'MENTAL' plans?" Because, if ever there was a mentally ill administration that needed a premium mental health plan, then it would be this one.

So, I've walked into mental healthcare facilities that displayed more reason, rationale, common sense, logic and wisdom than THIS failed administration that continues to hammer away at the final nails in New York City's coffin.

In all of my years as a third generation resident of NYC, I've never seen such government tyranny and anarchy--and, even worse to bear witness on how they can't control their devious impulses to maintain power and privilege at all cost (that was never earned, much less deserved)!

And, the endless trail of corruption, graft and monstrous greed (and collapsing dysfunction) frightens me to my rooted core!

That is ONE STRANGE LOOKING Latina....
bug eyed bobble head and waiting to collect campaign contributions from any "John" who opts for her delights.
He's gotta have kinky tastes, though.
She resembles one of those cheap dolls that were given away as prizes for winning at a Coney Island Boardwalk game.

this is the same city councilwoman who pushed for "nycday"for an Soviet atom bomb spy ETHEL ROSENBERG ,who was found guilty of espionage ,and executed with her husband after WWll.

It's funny how a council speaker who couldn't care less about her Jewish constituents wanted to honor a Jew who was guilty of treason.

Says all you need to know about her and her priorities.