Well this should be interesting 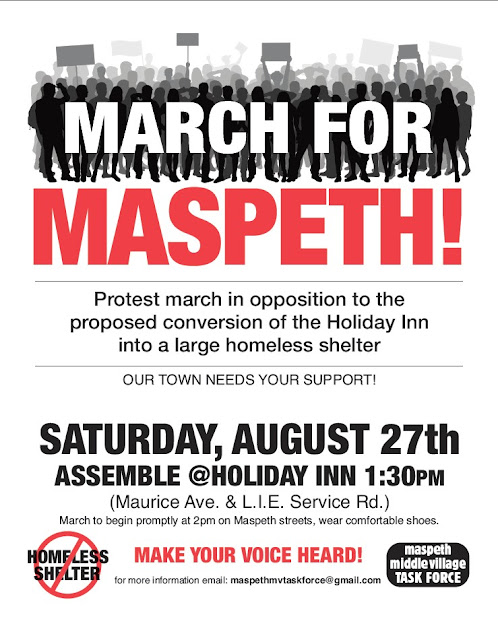 Posted by Queens Crapper at 4:51 AM

good luck to the Maspeth Citizenry. I will look for any (if any) media coverage for this and how they portray it.

The homeless gerrymandering must cease, they are even sending more to the dirty southeast (a LOT of hotels have been constructed here lately)

Was the city involved in paying hotel chains to build so many hotels in Queens? Were incentives given and any contracts signed stipulating that the city can buy out or take over these properties for city shelter purposes? Is anyone looking into this?

I wonder if the people of Forest Hills are concerned about what the city intends to do with the vacant Parkway Hospital. Stay alert people. City Hall might just pull a fast one there too.

Civil disobedience is in order. Disrupt the norm, this administration has declared war on the middle class. Time to take the fight to their houses.

Good wishes to you all.

This facility is in truly move in condition. I am sure it will be in move out condition in a few months!

All the shelter operators learned from the Glendale shelter that once people find out about what will take place in their community and "We the People" will put whatever legal roadblocks that are possible in place.

So in this elaborate and ugly game of chess, YOU the people of Maspeth have been Checkmated!

All the pieces were put in place right in front of your faces.

Everything is in place, allocations, money, LOTS OF MONEY, contracts, donations, contributions, and of course, bus loads of customers, strike that, "homeless".

Other than an incredible act of God, this is a done deal!!!

Keep the faith and PRAY!!!

Good Luck and I wish you all the best -

The pols are doing this to you because they rely on the usual lap dog electorate of Queens. Sure, you are protesting today, But where will you be in a year from now?

Lets take a look, shall we?

You will be were you always are after protests, with your usual hand-wringing after being double crossed by a hostile media.

They will portray story after story of the plight of ethnic-racial needy people whom are being protected by daring public servants shielding them from a mob of Trump supporters.

The pols, who control of the press by subsidizing it with ads and real estate industry, will win every time.

Your only hope is to create a long term civic culture that can stand up to the machine.

And from what we know of ye, dear folk from Queens, the chances of that happening is close to nil.

You have a better chance at success with buying up Lotto tickers to purchase that L I home and move out there to follow the rest of your family who left in the 70s.

This problem will be solved by moving these people to Dutch Kills hotels (all the apartments in the area are being filled by business packing in their tech drones anyway) and after the building frenzy along Jackson Ave and Queens Plaza is finished in 5 years or so, filling those buildings with section 8 and the underclass serving the Manhattan elite.

As far as the media is concerned this is last week's story. Time to shut down the LIE.

The union that serves and protects the rights of the homeless will be out in force with rent a thugs ready to break heads if any of you think you can stop them,The Homeless United International AKA Federal Government is more powerful than anything you can bring.
Mess with the Homeless United International and you will be
Audited by the IRS
Accused,tried and jailed for insubordination
Sieziure of all assets and last,die in a reindoctrinanation camp
DO YOU REALLY WANT TO MESS WITH HOMELESS UNITED INTERNATIONAL?

Here is a real issue and a real problem that will be overshadowed by insular, radical chic protests like "Go Topless Day", which call attention to the non-existent struggle of affluent white women in NYC.

We have little or no voice. Good luck.

Maspeth is, and has been, NYC's toilet for years.
FLUSH! Now they will complete the job UNLESS YOU STORM THE HOMES OF YOUR ELECTED OFFICIALS!
City hall demos have become social events, scheduled on the hour.
TAKE THE SHIT TO YOUR REP'S DOORSTEPS!

This March is a GREAT start. Keep up the heat! GOOD LUCK TO ALL!

Yeah that will show em, they may as well sing Kumbaya and wipe their ass with that permit. Who organized and picked that date Jerry Lewis ?

2nd worst weekend on the calendar to have an effective protest. Everybody will be on end summer vacation and all your crooked politician's will be Schmoozing & sipping cocktails up in the US opens air conditioned private VIP booths. Joe Crowley and his acoustic guitar included.

Fact -These USTA wise-asses worked it so Politicians dont use traceable tickets. Now NYC democrat pols just call stealthy for laminated VIP badges in advance and enter via the service road & gate around back where no public, cameras or news people are allowed. --private elevator to the top, party & eat like Kings all compliments of the USTA and stupid voters !!

THEN HEAD TO GRACIE MANSION FOR TEA AND BISCUITS COURTESY OF DI BLASIO.

Aint gonna happen, all your major media trucks will be camped in Flushing Meadow Park for the tennis people. All extra available cops as well, hope these people are prepared and have the skills (and some tools) to protect themselves. --I wish them luck

CBS Channel 2 was there to cover this news.

Citizens of NYC you have bought this upon yourselves by electing democrats over and over again for 4 or 5 decades. You have made this a one party city. The news media are supporters of the same political party and everyone has the same liberal mindset. Everyone wants their chance to suckle at the public tit so you elect the liberal Democrats that will give you the good shit that you want from government. Now that liberal Democrat government is going to ass rape you and there may be nothing you can do to stop them because you have made them so powerful and secure. Your only hope in the future is maybe to start electing, god forbid, republicans or someone who opposes the popular mindset. If not you all had better learn to eat shit like this, a lot and often.

The Media sells airtime to people looking for work in politics,whoever buys the most expensive airtime over and over buys the office,you don't elect officials,they are sold to you.


Fact -These USTA wise-asses worked it so Politicians dont use traceable tickets. Now NYC democrat pols just call stealthy for laminated VIP badges in advance and enter via the service road & gate around back where no public, cameras or news people are allowed. --private elevator to the top, party & eat like Kings all compliments of the USTA and stupid voters !!

These people should hit Crowleys street & office HARD with a popup mob (text messaging app) this weekend when most the 104 cops are dispatched to protect top pols watching US Open finals.