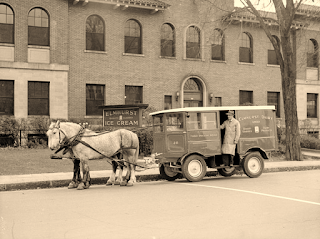 After nearly 100 years in business, the Elmhurst Dairy will close its milk processing plant in Jamaica, resulting in the loss of 273 jobs and the end of the city's famous brand, the company announced Tuesday.

The dairy, which according to its website, supplies milk to more than 8,300 grocers and 1,400 public schools, is the last of about 20 milk processing plants in the New York City and Long Island area which all closed within the past 25 years, the company said.

The dairy, currently located on a 15-acre lot at 155-25 Styler Road, was started by brothers Max and Arthur Schwartz at their father's farm on Caldwell Avenue in Elmhurst in 1919.

In the mid-1930s, the company moved to a small facility on South Road in Jamaica, and later expanded to nearby Styler Road.

In the late 1940s, Percy Krout, Max's brother-in-law, who ran another family dairy farm in Middle Village, joined the business.
Posted by Queens Crapper at 6:30 AM

Get out while you can!

Do you wonder why they are leaving???

This is udderly depressing .

This city has no soul.......and soon no businesses to speak of.

people think businesses can survive with endless benefits to labor, this story will continue to be played over and over as the min wage goes to 15-

100 jobs? wait till we see 1,000's of jobs being lost because of senseless populist laws-

it's a shame but that's the trend now. No more manufacturing jobs. Everything will be outsourced and imported from China including the American flags that we see flying on public buildings and institutions.

It's very depressing to see businesses moving out of nyc. The only jobs that will be left in America are military, police, firemen, doctors and nurses and possibly waiter and cleaning jobs....most will just be taken over by a computer or outsourced over seas. Wouldn't be surprised if we started importing milk from China soon....now that would be just a tragedy!

This is udderly depressing

Why should someone flipping burgers make $15/hour to do that? I don't owe them a living wage. Flipping burgers is not supposed to be a family-supporting means of employment. It's more like a training job for teens. By bumping the minimum wage up to $15/hr, the prices for everything for everyone else will skyrocket.

Alas, all New York City residents have been already 'milked' dry, and so very long ago.

Now, the bizarro, shadowy cultural wasteland of 'de Blasio-Land' is just another hollow, sanctuary city of nihilism for even hollower, more nihilistic transients---and, it's only getting worse with each new (but crooked) politician who enters the frey (and the even more crooked developers who onwn them), in order to capitalize on the imminent demise of the city's historic landmark trades of stable commerce that are sadly no more.

how many English speakers were employed there?

LMAO! Not to worry, Trump will bring back jobs to America. Low paying ones that nobody wants.
How else can he make a profit on his China made neckties if he makes them in America?
By paying Americans the same cooolie wages his Chinese factory workers are getting.

It doesn't say why they're shutting down. Bankruptcy? Rising costs? Is there anything the city can do to help them stay in business? Should we?

Dairy consumption is way down there are so many alternatives soy, coconut, almond and rice milks that are much healthier. Also many Asians and people of African decent are lacto-intolerant and don't drink or shouldn't milk or dairy products.Industries come and go with the changing times.

The owner is in his 80's, the property is worth millions, and the owner has been threatening to shut down for years. Because of this the other distribution companies who purchased milk from Elmhurst (Queensboro, Derle, Bartlett) sought out other manufacturers and moved their operations.

Anonymous said...
Why should someone flipping burgers make $15/hour to do that? ... What's the matter, afraid you're going to have to pay 5 cents more for your Big Mac? If we get rid of the exploited illegal labor the market will bring it to that level without minimum wage.

Sarc said: "The highest commercial property taxes, The highest utility rates, The huge permit fees, Endless tickets, fines and penalties, Overzealous inspectors, Great offers for the property"
Sarc is absolutely correct. And if we didn't have all these extraneous charges that only go into the politicians pockets -- especially "campaign contributions" from REBNY -- we would be able to afford a living wage for all employees and it's exactly why being in business is not profitable.

Mayor Deblah and the Democratic Club knows this but all involved want to keep the status quo because it lines their pockets.

In diverting from the main subject it seems that it makes more money for politicos if hotels are built and eventually house all the unfortunate homeless from all around the country.
If no one (especially those who own Daytop Village) didn't profit from creating more shelters in NYC and instead contributed to rehabbing foreclosed buildings we wouldn't have this problem of homeless people having to live in shelters.

And, further digressing from the main subject, the rent these shelter "companies" are getting from the city (as much as $3500 a month per family) would pay the rent for the homeless and allow them some dignity as well as privacy and a reason to try to make a living for themselves by themselves. (I'm not saying everyone but those who have lost their homes/apartments from losing their livelihood -- and that section of homeless is growing at a very rapid rate.)

Shelters are a dangerous place to live, a gross waste of resources, and make no one happy except those the City pays to manage them and those who kickback to the politicos.
(Just my 2 cents.)

Elmhurst Dairy closing must be the reason Silver Barn Farms (Middle Village) store recently sold. Different owners now but store was started by Elmhurst Dairy. Really a shame, the store and dairy were fixtures in the neighborhood for years. I can remember buying milk at the packing plant outdoor machines during milk strikes in the 60's. Time marches on.

After losing my good private Oxford/United health insurance and cholesterol meds due to Obamacare mandates. I had 2 choices buy it back for over $1000 a month as a useless "gold plan" with a $7500/7500 annual deductible or TWO quit all milk, dairy products. My cholesterol is now BELOW normal, more energy and lower blood pressure.
Milk, Eggs & Ice Cream is the #1 common poison to grown humans IMHO.

I now crush fresh almonds in a blender with water till liquefied and put that in coffee or breakfast Fruit loops. And I can still drink like a fish on weekends.
All this "milk builds the body" we been told since kids is bullshit

New York has been turning into a third world wasteland for decades, there used to be nice enclaves of middle class communities in this city in parts of Brooklyn and Queens but those are almost gone. Most middle class residents of both boroughs woke up and smelled the coffee to realize how much of a rip off it is to live in this city, the extreme weather, the fact that if you are not ultra rich you are a nobody, so many voted with their feet and left for other parts of the country, its why many middle class residents of both Brooklyn and Queens have moved away, and its mostly immigrants from Asian and South American countries that replaced them, but even these immigrants rarely stick around for long when they get a taste of the reality of this place.
New York has always been more edgy compared to middle American cities for years but its just become worse in recent years where big corporations own everything and its become a playground for the super wealthy, even they do not like it here that much either.
But hey there will always be some immigrant from somewhere else coming here by the dozens because they see some picture on the wall of glowing lights and a big city in their country. Several years ago in a bar in Poland met a woman who dreamed of coming to New York, she was a bartender in Warsaw and was always admiring the poster of New York in the bar where she worked. I guess everyone needs to dream.