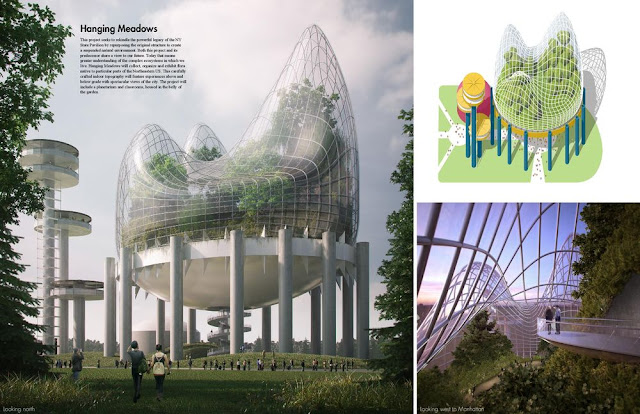 In March, the National Trust for Historic Preservation launched a design competition that asked entrants to imagine a future for the iconic Philip Johnson-designed structure. More than 250 entries were received, ranging from the mundane (a brewery with a hydroponic farm) to the wild and wacky (a cheeseburger museum). From those, a panel that includes archicritic Paul Goldberger picked four winners: three general ones, and one specifically from a pool of Queens entrants.

Though the four winners differ in execution, they all have one thing in common: envisioning the Pavilion as a public space where New Yorkers can congregate and hang out. Currently, the structure is closed to the public—it’s apparently not safe enough for sustained public use at the moment—but here’s hoping the renewed interest in the Pavilion will change that soon.
Posted by Queens Crapper at 12:43 AM

THIS WOULD BE THE BIGGEST WASTE OF TIME AND MONEY! SOMETHING LIKE THIS EXISTS/EXISTED NEAR THE HALL OF SCIENCE. IT WAS NEVER MAINTAINED AND EVENTUALLY FELL INTO RUINS. SO WE WILL HAVE ANOTHER MANMADE RUIN ON OUR HANDS IN THE NEAR FUTURE, FOR SURE.

Or, as is happening all over the city in every Manhattan park space, the thing could be fixed and painted and put back into use generating revenue as a restaurant and event space. For 40 years, have never understood why the NYS pavilion is such a tough nut to crack, when other properties are renovated all the time.

Remarkable! Consideration given to a pool of Queens entries! Our various City entities yap about public engagement - spend big bucks for community inout, then hand the work over to European star-chitects. . .

Your suggestion is impossible!

It would provide the best services, minimal maintenance, and at the lowest cost...

because it will never look better than this. FMCP does not get the support that the city gives Central/Prospect/etc...

Meanwhile, the statue that former BP Helen Marshall evicted is still langushing in Green-Wood Cemetery---forgotten for its 'Triumph Of Civic Virtue' symbolism that was robbed from the Kew Gardens Plaza site to which he was formely gifted (by Mayor Fiorello LaGuardia), where Civic Virtue is most, and always needed---QUEENS BOROUGH HALL---now, more than ever!

Recently, I visited Green-Wood Cemetery to see the restoration of this evicted-and-displaced statuary of great beauty and allegorical portent. How awkward this great and towering monument looks after it was 'lopped off' of its fountain base, and grand, fountain pedestal---it looks stupid on the ground without a platform (much less an audience), replete with a vacant, detached quality that sadly prevails.

But, what does Queens County's new Gestapo Melinda Katz do???--she spends nearly $1 Million to destroy the plaza even more with a 'planted ruin,' ostensibly to beautify a perfectly fine plaza that she and Helen Marshall themselves conspired to blight--now totalling $1.2 Million (for a memorial tribute to the women in Queens politics that no one ever said they wanted, much less was asked---of hereself and resident ghoul, Karen Koslowitz), instead of leaving this fine monument exactly where it belonged, where the cleanup and conservation would have cost under $50,000 to preserve! (Seriously, I couldn't make this stuff up, even if I tried to hallucinate!)

Bring back the f**king statue, Melinda--you and your pal Helen Marshall are only the LATEST two of the worst, backstabbing, tone deaf, derelict, dysfunctional political hacks to dishonor and disgrace Queens County with a vengeance--where you could BOTH benefit from the allegorical message of Civic Virtue--even in your advanced stages of an incurable illness called greed (and graft)!

What a tragedy then, that a marble statue embodies the very essential altruism, ethics and integrity that neither of you ever possessed--to disastrous, betraying effect!

And tell Melinda to stop advertising her Queens concerts using her own name! She knows that by stamping her name on this widely broadcast music series, the voters will recognize and remember her name when elections come around again. It's free advertising for her. She is so brazen and sneaky and things we are all dumb.

Speaking of tax payer funded concerts and events, what the hell was the Queens Library doing a battle of the bands? Besides continuing the slow death of rock and roll and r & B

Battle of the bands are just popularity contests, whoever bring the most people wins is has NOTHING to do with quality of the entertainment.
I wonder what the Queens library was selling or promoting to stoop so low and host such crap. Library's on Long Island are doing this also with democrat politicians in the picture. (Port Washington library for example)
The acoustic pounding must have been horrible for the employees, ears will be ringing for weeks. and YES Rock, Rock and Roll and R&B is dead. All guitar & song oriented music for that matter. Millennials who make up 70% of the buyers are all dumb and tone deaf. Your future voting base so I guess add Queens to that "dead list" too.

Possibly money laundering and kick back scams. For example: Town of North Hempsted spends over $250,000 a year on sound equipment rental from Designatronix Audio. All standard small tripod crap they can buy and own for $20,000 and hire a guy part time to set up run it but NO they REFUSE to hear a word of that..
Somebody is likely getting a HUGE kickback.

You gotta be kidding!
Next they will be growing some medical "pot" in that suspended terrarium.
Somebody was smoking something to come up with this "vision" for sure!

LMAO!
Queens' answer to Manhattan's High Line.
Somebody was high on something.

It will be filled with empty Corona beer bottles that local residents leave behind after mugging some unsuspecting tourists.

Wasn't there something like this over by the Science Hall? I remember trees growing inside some kind of enclosure much like a greenhouse. That fell to pieces in no time .

I like JQ LLCs idea. Too much of the park is used for stuff - soccer, cricket, whatever, and there's so little left where you walk around or just lie in the grass. I am all for a meadow or forested area to replace this ugly American Cheese Yellow (yes that's the actual color) monstrosity.