LaGuardia Airport Hotel won't be a homeless shelter (for now) 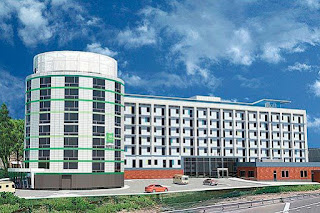 East Elmhurst’s old LaGuardia Aiport Hotel will be renovated and replaced by two brand-new hotels in the coming months.

The nine-story Ibis and seven-story Aloft hotels will be situated at 100-33 Ditmars Blvd. across from LaGuardia Airport.

According to state Sen. Jose Peralta (D- East Elmhurst) the renovations are being welcomed by the neighborhood.

“It’s a win-win for the community,” Peralta said in a Tuesday interview.

He said that the new renovations will not only give travelers a quality spot to spend a night to a few days, but also will help boost the local economy.

He added that the project could provide new jobs within the community.

And future homeless shelter rooms as well. In fact, that was the rumor not too long ago. I wonder what happened.
Posted by Queens Crapper at 12:59 AM

From an economic point of view, why not just build one large hotel?

I guess they are hedging their bets.

There always seems to be a lot of free Government money for homeless services...

The city turned the hotel on 94th and Ditmars into a shelter (300 rooms) 2 years ago. This was totally shocking. This had to have been the best location for a hotel as it was just 2 blocks from the airport. Now the houses across the street have new gates on their windows and the airport is flooded with homeless hanging out all day in their terminal. So you can bet your last dollar that this newly renovated empty hotel will become a shelter as well.

OR build a mixed use luxury residential and commercial space. This way the city can't use any tactics and force it to become a homeless shelter.

I will let you into a secret, most new hotels, especially in weird locations are built with the homeless in mind.

What better way to garantee 100 0/0 occupancy year around? The money is garaunteed from the gubamint. Low cost for labor as you wont need a hotel staff, win! win!

Its 50-50 if this location will house the homeless again, as it offers very good acess for the guests with a car, but not much else. The location sucks!
Lets see if that monorail will boost the economy.

Those properties better offer a happening bar and reasonably priced banquet
Space , this is what is missing in East Elmhurst.

It's all about the money. If a hotel is built in your neighborhood that isn't needed, the city puts it on the back burner for future use as a homeless shelter. Queens is the new dumping ground for the homeless. You won't see any in Manhattan or Brooklyn. The city doesn't give a crap about the middle class whose property values plummet when the homeless invade their neighborhoods. The politicians and boards of these shelters (Good Samaritan, etc) are making tons of money off these shelters. These agencies are paid around $3,000 a month for a room with no kitchen to house a couple or a family. I'm sure the city can find these people apartments (city-owned) that are sitting there empty for a lot less money. Oh, did I mention our taxes go up every year because we, the taxpayers are paying for this garbage? By the way, a majority of the homeless are not NY residents and come from out-of-state because of our generous benefits. Other state homeless facilities will pay the bus fare to NYC to make space in their facilities. Perhaps our city officials can instill a residency law so our city is not flooded with homeless. Better yet, bus the homeless to Detroit. There are tons of abandoned houses there. They can build their own neighborhoods.

People not from New York will walk one block, get scared to death and run back.
You have drug dealers, trannies, hookers. And worst of all these illegal immigrant drunks slobs from Mexico are everyplace. Now spilling into parts of Maspeth oogling & hooting at women going to work in the morning.
You may as well live in Beirut !!

Every time I hear the word "LaGuardia" I now cringe. Everything about that airport, its operations and its housing footprint disgust me.

But the Manhattan folks are so liberal and what about their rainbow panacea of everyone in beautiful harmony? I thought Manhattan would LOVE to have throngs of ork-looking people in their own buildings.

Maybe they are just teaching us how racist we all are. Bad Queens!

They should just tear it down and make a park. Not enough parkland and open space in Western Queens.

Diversity. Inclusiveness. Who started this? This is America. We are all ONE. Liberals, please stop building walls!

Make it a bordello. No brainer if you ask me.

Not all homeless are criminals. Some are just going through hard times