So we did some research over the weekend. The owner of the Holiday Inn Express site on paper is "New Ram Realty, LLC". A name attached to that corporation is Harshad S. Patel. Patel is president of Gujarati Samaj. But his claim to fame is hotel-to-homeless shelter developer.

Patel is owner of the former Quality Inn in Jamaica, which closed last year and became Retreat Inn. This hotel was noted for having been turned into a shelter without warning.

Patel was also behind the hotel controversy at the former Frozen Cup in Bellerose. Here's a gem: "On Dec. 15, one of the hotel developers, Mitesh Patel, told several dozen residents at a community board meeting at the Bellerose Assembly of God Church that he and his partners aimed to create a reputable hotel, not a “hot sheets” establishment." Perhaps not, but the Patels would be perfectly willing to turn it into a homeless shelter.

Just like they did with the Verve Hotel, which has had a litany of documented problems - so many, in fact, that the local police captain publicly complained about them. 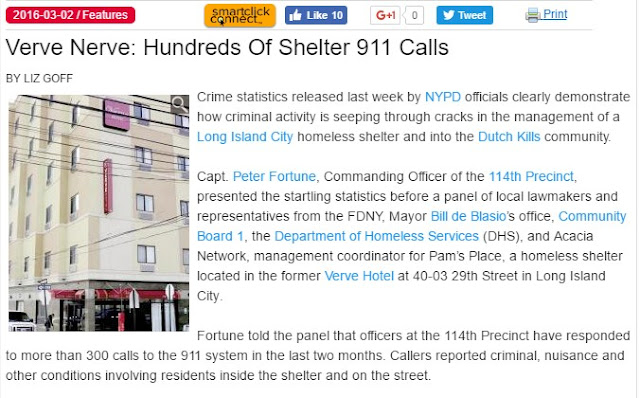 And the Verve Hotel is run by Acacia Network, just as the one at Maspeth will be.

So there is an existing relationship between this owner, the service provider and the City. What happened at Verve should be reason enough to not enter into another contract with those two.

Interestingly, the above news report stated that last year, there were close to 59,000 people in shelters, and the most recent census on DHS' website says 58,665, so if the numbers are stable then why the city needs to open more shelters anywhere is a good question.

This is simply the old game of real estate owners pocketing government cash and corrupt pols helping them do it. The electeds who foist these disgusting situations upon decent working class neighborhoods should be ashamed. But they never are because they never get sent packing on Election Day.

Isn't it great that the City has a bailout system in place for millionaire hotel developers paid for with our tax dollars? This is classic neoliberalism.

I wrote, "just because it's as-of-right don't make it right" on Curbed way back in 2007 when this shit was being built because we all kind of knew what was coming down the pike.
Posted by Queens Crapper at 12:18 AM

And who says "The American Dream" is dead, it is well alive in NYC where a few folks and our corrupt elected officials are living high off the tax payers.

With shit like this, how can this asshole Mayor or this city refer to themselves as "liberal progressive". In fact situations like this are the opposite of that.

More than likely will not be reading about this in our fine in-depth media circle.

AND yep, the people have themselves to blame, not holding the corrupt officials accountable and voting for shit like Melinda Katz into office.

If you build they will come!

Hillery Diane Rodham Clinton has stated that if she were elected to the office of President, that she would increase that by five hundred and fifty percent!

They have to live somewhere, and our city is willing to pay for them with your tax money.

Patel is just getting ready to make a LOT of money...

Remember Dumblasio managed Hillary's campaign back in 2000 and has a long term relationship with the Clinton family. If you like what is happening in NYC make sure to voter for her on election day

Someone from the 3rd world setting up another 3rd world right in our own backyards. Can't say anything about that because liberals would call you a racist ...

Jimmy Van Bramer knew all about the "Verde" hotel in long island city way before his constitutents knew about it - as they say follow the money so the Quality Inn located at 53-05, Queens Boulevard is in his district and he denies ever knowing about anything he is such a liar at best - and yet he does not want anyone picketing at all --

Excellent research!! Good work, Crappie!! This is why we check in with you every day. Electeds would be wise to have their staff people do the same!!

Those politicians generally can't get booted out because their parties see to it that they either run unopposed or back them so strongly that their opposition doesn't stand a chance.

Need to find out if mayor received money ect.From these hotels who support him.

Yup. I'll have that posted soon.

DiBlasio, corrupt? Say it ain't so!

Anybody who can afford to buy a politician deserves the bennifits,that's what money buys,stop being jealous

Who says no to free money?

Once again...Maspeth is seen as the shit pot of Queens. If this were northeast Queens even the crooked
Paul Vallone would not be allowing this. If you've got to take a dump, do it in Maspeth. That is the developers' carte blanche paradise.

Mayor DeBlasio will not be happy until every community in the NYC use hotels to house the homeless. No affordable housing. Just a hotel room and search everyday for a meal. Not knowing if tomorrow you will be in another hotel.
I guess jobs at these hotels are not secure today a Holiday Inn Express tomorrow a homeless shelter with these hotel people on unemployment.